As InDaily revealed yesterday, the Department of Human Services has launched an inquiry after a man at its transitional residential service at Hampstead Rehabilitation Centre was rushed to hospital in a state of “neglect”.

Staff at the Northfield facility called an ambulance on June 3 when they noticed the man’s deteriorated condition and paramedics took him to the Royal Adelaide Hospital, where he is still being treated.

The case has been reported to the NDIS Quality and Safeguards Commission, which has confirmed it is “closely looking into” the matter but there are concerns it doesn’t have the jurisdiction to properly investigate a state government-run facility.

Advocates are backing calls from the State Opposition for a full independent inquiry.

Disability Rights Advocacy Service spokesperson Angela Duigan said it would help provide “full disclosure” in getting to the bottom of what went wrong.

“There are still instances where this is able to happen in the lives of people with disabilities, that they are neglected.”

InDaily understands that ambulance officers and several clinicians at the Royal Adelaide Hospital made complaints about the man’s condition.

One doctor told management the concerns centred around “basic hygiene and care, including wound care”.

The Department of Human Services runs the facility in question at Hampstead – called Transition to Home – and has launched an inquiry.

“We take allegations of care concerns very seriously and have commenced an investigation into services provided to this client,” a spokesperson said.

It’s understood the man was receiving wound management from a registered NDIS provider, and visits from a GP, while at the facility.

“It must have been really serious for doctors and ambos to be reporting it,” Duigan said.

“It relates to basic hygiene and care and wound care. That is just so concerning.

“Our organisation would have hoped that the spotlight that was shone on the Ann Marie Smith case would have had some impact on the care that is provided to people, especially in government-run institutions.”

It is alleged the 54-year-old, who had cerebral palsy, had spent nearly a year sitting in a cane chair in putrid conditions in the lounge-room of her home.

Her carer, Rosemary Maione, has been charged with her manslaughter.

The 24-bed Transition to Home program, where the man was being care for, was opened at Hampstead in March last year at the start of the pandemic, to house people with disabilities discharged from hospital and awaiting more permanent accommodation.

SA Health owns Hampstead Rehabilitation Centre but the Transition to Home program is managed by the Department of Human Services.

“This is kind of like a wilderness area in between health and disability where it’s really difficult to know who actually is responsible,” Olbrycht said.

She said the buck ultimately stopped with Human Services Minister Michelle Lensink, since her department runs the facility.

“These are going to be highly, highly vulnerable people if they are in the health system as well as having disability,” she said.

“This is where we really struggle in the whole area of disability. How do we best support these people without limiting their lives? How do we give them access to the good things of life while at the same time ensuring their safety?”

“I hope that that man is OK, and that he gets accommodation and gets over his health issues quickly and gets good support,” she said.

“We know that Ann Marie Smith’s situation was really awful. It’s not the first time it’s happened. And it won’t be the last unfortunately.”

“This man deserves to get his story told and it needs to be sorted out so there is less likelihood of it happening again,” she said.

“What has caused this situation? Is there something that can be done to prevent it in future? Every one of these sorts of incidents needs to be investigated.” 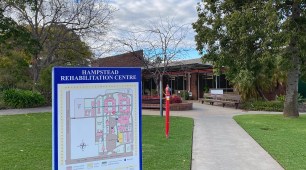 Investigation launched into 'neglect' of man at Govt facility

A Department of Human Services spokesperson said “in line with the department’s incident management policy and procedures, relevant authorities were informed of the allegation of care concerns, including the Minister for Human Services”.

A spokesperson for Human Services Minister Michelle Lensink said “the Minister was informed about this issue in line with the Department’s incident management process”.

“Allegations of care concerns are taken very seriously and the Department has commenced an investigation into services provided to this client,” the spokesperson said.