Central Market Authority chairman Theo Maras told InDaily that work on the new building, which will tower over the city at 38 storeys and feature new retail areas, office space, a hotel and residential apartments, had been pushed back from its original September start date.

He said demolition of the existing arcade wouldn’t begin until January at the earliest, insisting that market trade would continue as normal over the peak Christmas period.

Maras said the delay would result in a later-than-expected opening date for what has been branded the “Market Square” project, although he said he was unsure when that would be.

The Adelaide City Council, which is spearheading the project with Melbourne-based developer ICD Property, says on its website that construction is scheduled to begin this year with completion anticipated in 2024.

The council’s Director of City Shaping Tom McCready told InDaily in March that “ground break” for the redevelopment was anticipated in the second half of this year, subject to the council securing all statutory approvals and necessary pre-commitments.

For that to happen, the council would have to wait until at least December, as it is bound by a six-month redevelopment clause with existing arcade traders.

Traders have told InDaily that the council is yet to enact the six-month clause, prompting concern about whether the arcade will still be open for Christmas trade.

Maras said he was at a meeting when traders were told that construction would not start until 2022.

“I can emphatically say that the construction will not start this side of Christmas,” he told InDaily.

“Construction will start in the new year (with) the date yet to be determined, but there will be no interruption whatsoever, even in January.”

The prominent Adelaide developer said the delay was due to the ongoing impacts of the COVID-19 pandemic on the construction industry.

“The intent was that the construction would start in 2021 and all things were going through to be put in place for that to happen,” he said.

“One of the major components of this development is a hotel.

“There’s been some retuning and redefining of what’s going to happen with the hotel, with the apartments and with the project as a whole.

“COVID has slowed down that process, obviously, as it has many other developments around the world, let alone Australia.”

In a statement to InDaily, McCready confirmed that the anticipated construction start date was now “early 2022”.

He said the council was waiting for ICD Property to provide it with sufficient notice prior to construction starting.

“This will then allow for Council to inform all of its key stakeholders,” he said.

Meanwhile, Maras said he was in the process of leasing the approximate 45 shops on the ground and first floors of the new building to food, beverage and homewares retailers.

He said he was in talks with “national tenants” such as Melbourne-based Italian food producer and café Brunetti, South Australian seafood merchant Clean Seas and Adelaide Hills-based condiment producer Beerenberg.

He also said he was in talks to open up a “white table” restaurant serving wagyu beef from Australian billionaire Gina Rinehart’s cattle stations.

“I’ve got a lot of expressions of interest,” Maras said.

“The perimeter of the new and old market section will be European continental and Indian food and beverage cafés, restaurants, eateries and fresh food sales. 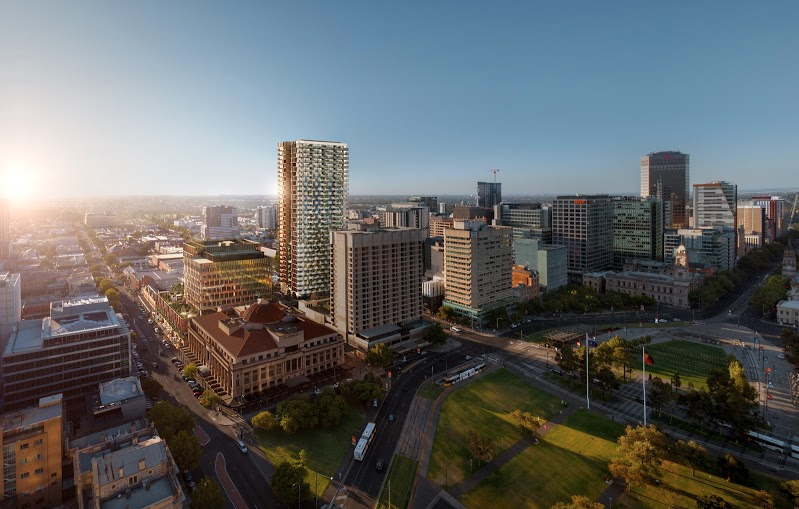 Maras said that market trade was currently in a “very good place” and the construction start date would not impact business.

“I am absolutely and totally relaxed about when it (the redevelopment) starts and when it finishes,” he said.

“I was chair of the Rundle Mall Authority when we actually dug up the whole of the Mall but we didn’t stop one shop from operating and that was a street – it wasn’t a building next door.

“Major buildings get built everywhere, as we’ve seen over many years.

“Technology, occupational health and safety and continuation of business is a major thing in our life today, so I am very categoric in saying there won’t be an impact.”

McCready said the council and ICD Property were “committed to minimising disruption for traders throughout construction”.

“The market’s trading hours will not be affected,” he said.

It comes after The Advertiser reported in November that Chinese-backed investment company Nanshan Singapore had pulled out of the project following negative public commentary about its alleged links to the Chinese government.

Nanshan was a 10 per cent investor in the joint venture between ICD Property and the council.

The State Commission Assessment Panel approved the redevelopment in January.

Once complete, ICD Property will own the central tower, which will include 15,000 square-metres of office space to be managed by JLL.

The council on Tuesday will vote on a proposal from the Adelaide Central Market Authority (ACMA) to extend its oversight over the new arcade building once construction is finished.

It anticipates the project will generate $135 million to the state’s economy and create more than 1000 construction jobs.