The granting of the three-year lease follows several previous failed attempts by Clean Seas, with the council saying it was this time effectively forced into the decision by the state government.

But the memorandum of understanding (MOU) between the parties has a list of conditions such as limiting the size and frequency of Clean Seas vessels coming in and out of the marina, prohibiting the transfer of nets from the marina and conducting ‘heavy lifting’ operations of bulk food and harvested fish out of Port Pirie.

The Fitzgerald Bay site is about 6km north of Point Lowly by boat whereas Port Pirie is a 36km journey by sea to the opposite side of Spencer Gulf.

Clean Seas has been attempting to gain access to the Point Lowly marina since 2019 but had repeatedly been blocked by the council. Last night’s approval will allow it to move its first fingerlings into Fitzgerald Bay before the end of the year.

In a statement released after the council meeting, Whyalla Mayor Clare McLaughlin said the council risked losing control of the state government-owned marina if it rejected the latest bid.

She said the council’s objections to previous proposals had enabled extensive ongoing consultation with the community and direct negotiations with Clean Seas, ultimately leading to a significantly improved outcome that addressed many of the community concerns.

“The State Government has already granted aquaculture approvals to Clean Seas and is supportive of their use of the Point Lowly Marina.  Further, a recent independent assessment of the facility deemed it to be suitable – with upgrades at Clean Seas’ expense – for the proposed operations,” McLaughlin said. 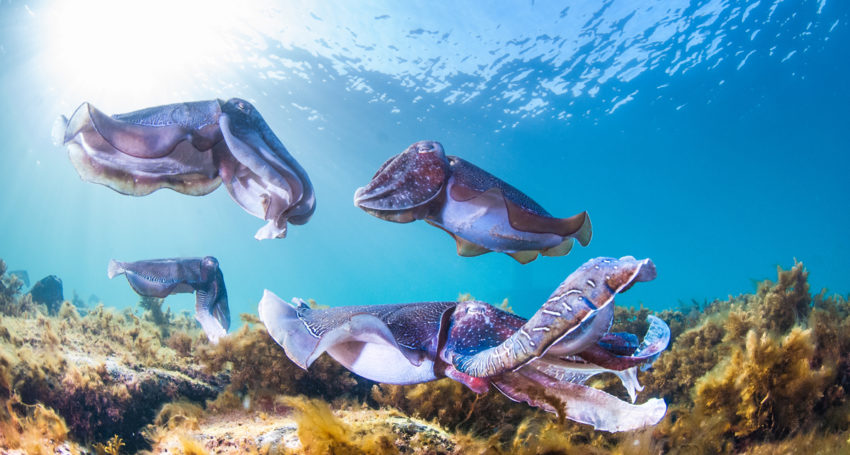 Up to 200,000 Giant Australian Cuttlefish gather off of Point Lowly to breed each winter. Photo: Carl Charter

“The State Government has recently advised that it will reclaim control of the marina if successful negotiations with Clean Seas could not be reached. This would remove Council’s ability to impose restrictions on the use of the facility and, in turn, minimise potential impacts on our community.

“Our hands have therefore been forced in making a decision that a number of councillors are still uncomfortable with.

“However, Council believed it was better to retain control of the marina, rather than the State Government passing control to an unknown third party.”

The Fitzgerald Bay farm is set to be Clean Seas’ largest site with a capacity of more than 4000 tonnes of yellow tail kingfish and is a key part of the company’s plan to double its production capacity to 10,000 tonnes.

The company has operated smaller farms in the area in the past but not since about 2010.

That earlier operation had led to complaints from local boaties and shack owners about Clean Seas fouling up the marina with fishing net waste and dominating traffic in and out of the site.

There have also been concerns raised that any escaping kingfish would dine out on local cuttlefish but studies of the wild kingfish population have found little evidence of this.

The council had asked Clean Seas to consider servicing its Fitzgerald Bay site from Port Pirie but the company said that would add wage and vessel costs of about $540,000 per year to the operation.

Point Lowly is about 12km north-east of Whyalla and is home to the world’s largest aggregation of Giant Australian Cuttlefish each winter.

Up to 200,000 cuttlefish gather in the area to breed from May to August each year, also attracting divers and eco-tourists from around the world.

McLaughlin said the council was passionate about protecting Whyalla’s unique cuttlefish congregation, which played a significant part in the final decision.

“We have been assured by PIRSA and the EPA that the nutrient levels from the farms would be well below the accepted guidelines and therefore have a negligible impact on aquaculture, including the Giant Australian Cuttlefish,” she said.

“Despite this, there will be strict independent environmental monitoring and regulations in place – undertaken by both Clean Seas and State Government bodies – with Council requesting the monitoring data be made publicly available to ensure Clean Seas is held accountable to protecting the marine environment.

“Ultimately, the State Government will be responsible for the protection of our pristine Fitzgerald Bay marine environment as a result of the approvals they have granted.”

Last month Clean Seas announced the completion of a placement to raise $25 million to be invested in “fully utilising existing production licences in South Australia”.

The publicly-listed company is the world’s largest full-cycle commercial kingfish producer and is a global leader in the breeding, farming and sale of yellowtail kingfish.

It raises fingerlings at its Arno Bay hatchery and grows them out in sea pens in Spencer Gulf, predominantly near Port Lincoln before processing the fish in Adelaide.

Clean Seas CEO Rob Gratton said he did not have concerns about the Fitzgerald Bay site’s impact on the cuttlefish population as the location had been deemed appropriate by several layers of government and would be subjected to intensive third-party monitoring.

“We’re very grateful for the support of the council and keen to deliver on the commitments around investment, jobs and career pathways for the kids as we get that farm up and running,” he said.

“There have been other options available to us but certainly the Point Lowly Marina is the most appropriate and the most commercially viable so it allows us to get on with the project with the aim of putting juveniles in at that location later this year.”