They are often handcuffed to beds that should be available for other patients and monitored by multiple security guards, putting further strain on the state’s overcrowded hospital system.

Leading South Australian forensic psychiatrist Dr Paul Furst has told InDaily there is a “well recognised shortage” of forensic mental health beds – a problem the doctors’ union says is having an “enormous” impact on hospitals.

Figures provided by SA Health show there are 60 inpatient forensic mental health beds in South Australia – 20 short of what is recommended in the state’s Mental Health Services Plan.

There are also 10 “step down” beds at Ashton House at Oakden.

Furst, who is the SA branch chair of the Royal Australian and New Zealand College of Psychiatrists, said the number of forensic mental health patients in South Australia had grown from about 12 in 1995 to 250 today.

Furst said there were “anywhere from five to 10 patients per day” unable to access James Nash House and instead kept in hospitals.

“So there are a significant number of patients who are outliers as such.”

Furst said they were kept primarily in locked wards at the Royal Adelaide Hospital and Lyell McEwin Hospital and sometimes at Flinders Medical Centre and Glenside.

“Obviously if you have a forensic patient in a psychiatric intensive care unit (in a hospital) you’ve got one less bed for people who are very acutely unwell,” he said.

“So it places significant pressure down the line and that trickles down throughout the system.

“We are significantly under at the moment.”

“It’s extremely serious because we essentially have to have emergency cubicles occupied for many days, essentially for people who are under continuous guard,” he said.

“It’s a very difficult environment for that person as well so it’s completely counter-therapeutic, it usually makes people worse.

“Imagine being confined to a small cubicle space that’s lit all the time, that’s noisy, no access to any sort of exercise or even food.

“You don’t get much food in that sort of environment for days on end.”

Pope said it was an “extremely common” occurrence at the Royal Adelaide Hospital while at the Lyell McEwin “it probably happens on average every week or so, either one or two patients”.

“Across the hospital, it would be more than that.

“Across the hospital, you’ve probably got two or three most of the time.”

Pope said the union often received phone calls from “distressed doctors about the numbers of forensic mental health patients stuck in the ED for long periods of time”.

Pope said they were “kept like that for days until they go to James Nash or sometimes if they are lucky enough to get to one of the locked wards”.

He said it put “enormous” pressure on hospital staff.

Adjunct Professor John Mendoza, who has resigned as Adelaide’s mental health chief in protest at a lack of government action, yesterday released a 10-point plan for urgent action to reform the system.

At the top of his list, he wants all forensic patients transferred out of general hospitals and into forensic mental health services by the end of April.

He’s calling on SA Health and the Correctional Services Department to set up additional capacity “now” – “not in two or three years”.

He said there was currently one patient who has been at Glenside for more than 110 days, who should have had a bed at James Nash House.

“I said, ‘you allow this to happen knowingly’. I said ‘I will not allow it to happen’.

“You’ve got people who have committed violent crimes in general mental health wards.

“This is unacceptable. You would not do this to any other group of patients.”

In a statement, a spokesperson for the Northern Adelaide Local Health Network said “we acknowledge there can be high demand for forensic mental health beds – particularly for high-risk offenders who may only be suitable to be treated at a particular facility”.

“While the majority of forensic mental health patients are managed in the community, a number of measures are being put in place to stem the flow from prison and the courts, and also to facilitate more rapid admission to James Nash House including a court diversion program,” the spokesperson said. 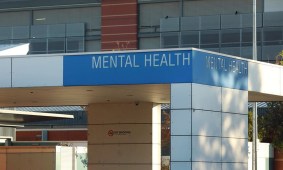 In a statement sent to InDaily recently, Chief Psychiatrist Dr John Brayley said that in response to the COVID pandemic, “an additional $15 million was provided to fund a temporary surge in mental health services, with some of this funding being used to increase mental health in-reach services to young people in youth justice facilities and to adults in prison”.

“Discharge decisions for forensic patients are mostly made by courts,” he said.

“It is possible that a change of legislation that came into effect in late 2017, which altered the principles to be followed by the courts, has slowed discharges.”

“Mental health services will continue to be a focus of this government,” he said.