He broke his silence this afternoon, after allegations surfaced publicly last week that a 16-year-old girl had been raped in 1988 in Sydney by a man who is now a federal minister, when they were both teenagers.

The Adelaide woman took her own life in June last year, aged 49, after going to police with her complaint.

An emotional Porter today told reporters “the things that are being claimed to have happened did not happen”.

“I wanted to start by saying something to the parents who are grieving for the loss of their adult daughter,” he said.

“I only knew your daughter for the briefest periods at debating competitions when we were teenagers about 33 years ago.

“In losing that person, your daughter, you have suffered a terrible loss and you did not deserve the frenzied politicisation of the circumstances of your daughter’s death.

“I have thought long and hard about the implications for you of what I feel I need to say today, and I hope that whatever else happens from this point that you will understand that in saying today the things that are being claimed to have happened did not happen, that I did not mean to impose anything more upon your grief.

“Because what is being alleged did not happen, I must say so publicly.”

Porter said prior to the allegations being published “no-one in law enforcement or the law or politics or the media ever put any substance of any specific allegations to me at all”.

“I was aware over the last few months of a whispering campaign,” he said.

“Had the accusations ever been put to me before they were printed I would have at least been able to say… and it’s the truth… and that is that nothing in the allegations that have been printed ever happened.

“Could I have forgotten the things that have been printed? Absolutely not. They just did not happen.”

Porter said while he would not be standing down, he would take a leave of absence after speaking to his doctors because he was concerned about his mental health.

He said he would take “a couple of weeks’ leave” for his own “sanity” because he had “no honest answer” when friends and family had recently asked him if he was OK.

He denied any sexual assault or sexual relationship with the woman.

Porter said if he stood down from his position as Attorney-General “because of an allegation about something that simply did not happen, then any person in Australia can lose their career, their job, their life’s work based on nothing more than an accusation that appears in print”.

“If that happens, anyone in public life is able to be removed simply by the printing of an allegation,” he said.

“Every child we raise can have their lives destroyed by online reporting of accusations alone.

“My guess is that if I were to resign – and that set a new standard – well there wouldn’t be much need for an Attorney-General anyway because there would be no rule of law left to protect in this country.”

New South Wales Police yesterday said their investigation into the matter was closed because there was “insufficient admissible evidence” to proceed.

The allegations were detailed in a letter sent to several members of Parliament last week by friends of the woman in whom she had confided.

Greens Senator Sarah-Hanson Young, who was one of the MPs who received the letter which she forwarded to police, described Porter’s press conference as “extraordinary” and unlike any she’d seen before in her time in politics.

Hanson-Young said she understood Porter’s emotion and why he needed to take some leave “but this doesn’t resolve the issue”.

“I think we really now need to see an independent inquiry” she told the ABC.

“The question is whether he is a fit and proper person to be around that Cabinet table with these allegations levelled at him.

“These are grave accusations. What is levelled at the highest-ranking law officer of the land is a heinous crime.

“We’ve heard now the minister’s version of events. We need to make sure (the alleged victim’s) voice is heard as well and the only way that happens now is in an independent inquiry.”

Porter’s public declaration comes after days of pressure on Prime Minister Scott Morrison to stand the minister aside and establish a judicial inquiry.

On Monday, Morrison told reporters he’d spoken to the minister who “vigorously” rejected the woman’s claims and that investigating the allegations was a “matter for the police”.

Earlier today, Opposition Leader Anthony Albanese called on the Prime Minister to ensure the matter was properly investigated beyond the minister’s statement.

Albanese suggested an inquiry, like the investigation into sexual harassment allegations against ex-High Court judge Dyson Heydon, or a coronial inquest as options.

“This will require further leadership and action from the prime minister,” he said.

“Now that the existing legal processes have been unable to proceed, certainly in terms of NSW Police, I think people will be looking for further responses beyond any statement that might be made today by the minister.”

The Labor leader said Morrison’s response that it was a matter solely for police was inadequate while also stressing the presumption of innocence was crucial.

“This is a disturbing allegation,” Albanese said.

“The accusation that was made by the woman is very detailed, and quite harrowing. People are looking for leadership on this issue.”

Lawyer Michael Bradley, who represented the woman, said it was no longer a criminal matter.

“We have a senior cabinet minister who’s been accused of a grave crime and that calls into question his integrity and, at the moment, the integrity of the whole cabinet,” he told the Seven Network today.

Bradley believes the minister should step down while an independent inquiry looks at the allegation.

One of the woman’s friends, Jo Dyer, said the acts she described were shocking. 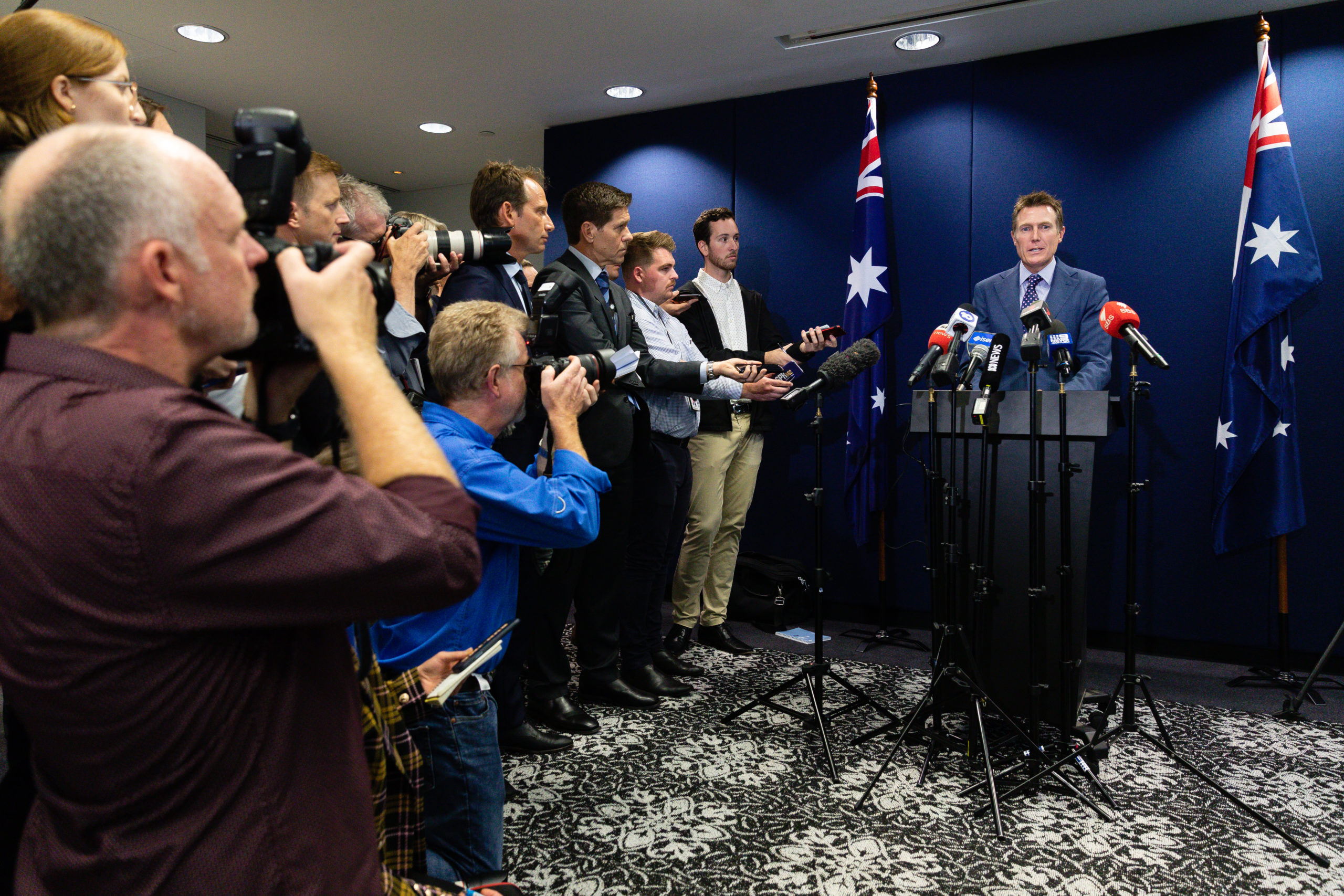 She said any investigation would need to ensure the minister received a fair hearing.

“The Australian people deserve to have it got to the bottom of. There needs to be some kind of investigation into this,” Wright told ABC radio.

Federal police have confirmed it is outside their jurisdiction after senior politicians sent them a letter detailing the claims last week.

South Australia Police say they’ve prepared a report for the Coroner on the woman’s death and it’s now up to him to decide whether to hold an inquest.

But the SA Coroner’s Court has issued this statement: “The cause and circumstances of the death are under investigation by SAPOL on behalf of, and at the direction of, the State Coroner.”

“On the morning of 1 March 2021, an investigation file regarding the death of a woman in June 2020 was delivered to me by South Australia Police,” he said.

“The woman’s death and related matters have been the subject of media reporting in recent days.

“Whilst SAPOL has provided information to me, I determined that the investigation is incomplete.”

Whittle said “this was particularly evident having regard to information contained in recent media reports”.

“Counsel Assisting the State Coroner was allocated to assist SAPOL in the direction of the further investigations which I have requested,” he said.

“The investigation is continuing and once that investigation has been completed to my satisfaction, I shall determine whether to hold an inquest.”

Earlier today, Nationals senator Matt Canavan said he could not see any reason why the minister should not continue in his role.

“To this day what we have seen are allegations, serious allegations,” he told the Nine Network.

“But if the simple mere allegation or making of an allegation would cause someone to be removed from office, that obviously sets a very dangerous precedent.”

Nationals MP Barnaby Joyce backs an independent inquiry but wants it held behind closed doors to avoid a trial by media.

The government has been under intense scrutiny for more than two weeks after former Liberal staffer Brittany Higgins alleged she was raped by a colleague in Parliament House in 2019.

There is no connection between the two allegations.

If this story has raised issues for you, you can call 1800 RESPECT, which provides support for people impacted by sexual assault or abuse.