All state and territory leaders – except Western Australian Premier Mark McGowan, who stayed away citing adherence to health advice about co-mingling with South Australians – met in the national capital, with Prime Minister Scott Morrison emphasising the need to increase hotel quarantine capacity across the country.

However, South Australia has not been asked to lift its existing cap of 490 new arrivals per week, after local medi-hotels resumed accepting international arrivals from Tuesday – the first flights since last month’s Parafield cluster prompted a brief ban on repatriation efforts.

Marshall did not speak at a media conference after the meeting, but his office confirmed SA was not asked to lift its intake, saying: “As of next week our cap for international arrivals is 490 per week.”

Marshall last month unveiled an eight-point plan as a response to concerns about the state’s medi-hotel system, which included transferring all positive COVID-19 cases from medi-hotels to a dedicated health facility and asking national cabinet to “consider testing all returning Australians citizens prior to their flight with the view they must have negative test results before boarding”.

“Once these new actions are implemented we will be able to gradually resume our international arrivals for returning Australians,” Marshall said at the time.

However a dedicated facility is yet to be established, with positive cases now quarantined on separate floors of an existing facility at the Pullman Hotel.

A spokeswoman for the Premier told InDaily that Marshall today raised the question of testing returning citizens before they boarded their flights, but “the advice from the Chief Medical Officer was that it was unlikely to significantly reduce the risk and unable to be implemented”.

Morrison today revealed that 45,954 Australian citizens had been repatriated since September 18, with almost 39,000 still registered to return.

More than 10,000 of those are in India with another 5000 based in the United Kingdom, he told reporters.

“Our first priority is Australians returning home,” he said, noting that NSW currently “carry half the burden” of facilitating this.

“Victoria has begun again and the Premier [Daniel Andrews] and I looking forward to seeing that uplift in the new year,” Morrison said.

“What we all understand is there are physical limitations on the hotel quarantine capacity but that is the safest and most effective way for people to come home and quarantine.”

He said the assembled government were keen to create additional capacity for seasonal workers and international students but “our first priority is quarantine capacity for returning Australians”. 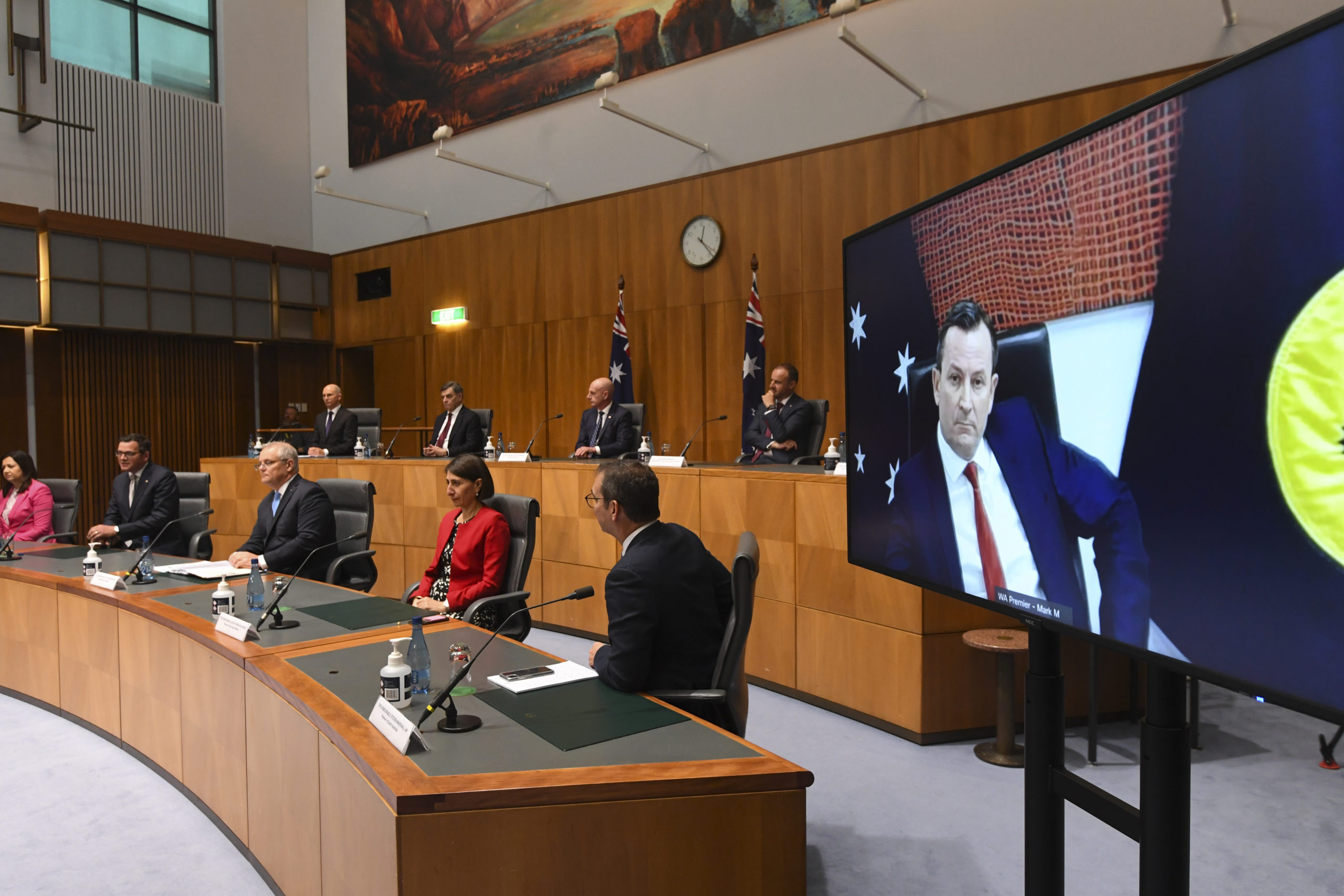 Mark McGowan did not attend in person, but was ironically seated – virtually – next to the SA Premier. Photo: Lukas Coch / AAP

The PM noted re-engaging with international students was “an important part” of Australia’s economic recovery “but that can’t come at a cost of Australian citizens, who have every right to return to their country”.

Andrews said “the PM and I had a conversation last night about [Victoria] lifting our numbers, and we’re confident we’ll be able to do that – but it’s got to be done safely”.