The gatehouse on the corner of Cross Road and Fullarton Road, built in 1890 and linked to the University of Adelaide’s Urrbrae House historic precinct, will be demolished to make way for a road-widening project, Transport and Infrastructure minister Corey Wingard announced overnight.

Wingard justified the demolition on the basis of a government-commissioned feasibility study into the possibility of relocating the building. The Government told The Advertiser that the study found that moving the gatehouse was too expensive and likely to be unsuccessful.

In a media release put out by Wingard’s office, fellow minister David Pisoni said “the realisation that retaining the Urrbrae Gatehouse was not feasible was particularly difficult”.

However, the study by FMG Engineering clearly states the opposite – that relocating the historic building “is feasible”. It details how it could be done to minimise damage to the structure.

National Trust SA and the University of Adelaide have both registered significant concerns about the project today, with the latter saying it would lead to the destruction of 20 trees, some of which are over 100 years old.

A University of Adelaide spokesman told InDaily today that the university was “deeply concerned” about the potential impact of the Government’s road project on its Waite campus, which is also home to the Urrbrae House historic precinct.

He said Wingard’s Department of Infrastructure and Transport had notified the university that it would compulsorily acquire some of the land bequeathed to the university a century ago – a decision which was “unacceptable”.

“The proposed widening of the roadway would result in the carving off of bequeathed land, demolition of a heritage building, destruction of significant trees, and have a detrimental impact on the Waite Arboretum collection,” he said.

“The bequest of land to the University of Adelaide from pastoralist Peter Waite, stretching back almost 100 years, is one of the largest and most significant philanthropic gifts in the history of South Australia. The Waite campus, which includes the Waite Arboretum, is held in perpetuity by the University and is a South Australian treasure.”

As well as demolishing the building known as “The Lodge” or “Gatehouse”, the removal of the roadside section of the Waite Arboretum on Cross Road “would destroy a number of trees of historic significance”.

“The University estimates that under the current proposal approximately 20 trees would be removed, some of which are 120 years old and significant in size.

“The University of Adelaide is opposed to the acquisition of Waite campus land and is advocating that government reconsider its plans and seek alternatives. The university will strive to protect the campus, its heritage and the legacy of Peter Waite.”

Wingard’s decision to destroy rather than relocate the gatehouse is based on an FMG  study, dated June 30, 2020.

That study finds: “From FMG’s inspection of the building and its construction, it is FMG’s opinion that the proposal to move the building is feasible from a structural point of view. However, FMG recommends that consideration must be given to the issues discussed below.”

The report then goes into detailed engineering considerations that it says would help to minimise damage to the structure during the relocation process.

In particular, FMG recommends a methodology for moving the building that ensures the “structural integrity of the wall fabric is maintained at all times”. It also recommends new footings for the building at any new location.

“This is expected to minimise typical limiting factors for transportation of the building, such as road widths, traffic management and the like,” the report says. “However, FMG notes that there are a number of large trees located in the vicinity of the existing site and therefore careful consideration of the route is required in order to minimise the tree removal … to accommodate the transport of the building.” 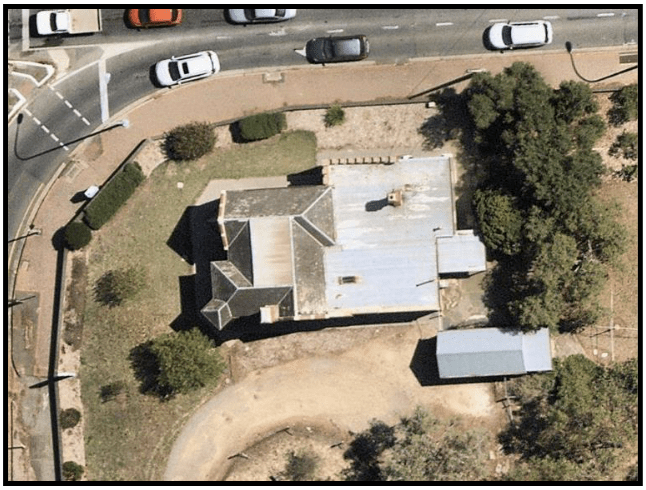 An aerial image included in the FMG report which shows the proximity of the heritage building to the intersection.

The report is predicated on the expectation that the building will be moved and notes some upsides for the building’s preservation.

“The process of moving the building will impose new loads on the building and provide a good test of the building’s structural integrity,” the report says. “Once the move is completed, the building should be inspected for any signs of distress that may indicate hidden structural flaws.” The full report is available here.

National Trust SA chief executive Dr Darren Peacock said the decision was part of a pattern from the government in relation to heritage-listed buildings of choosing “expediency over imagination”.

He said relocating heritage buildings to protect them was done all over the world – it was, in fact, a standard practice.

“It’s done all over the world – this is just a lack of will and imagination to take care of these places,” he told InDaily.

“We’ve had this repeatedly from the department in that they misrepresent what the options are and don’t give the public the opportunity to properly assess those options.

“We have to have more transparency around these decisions.” 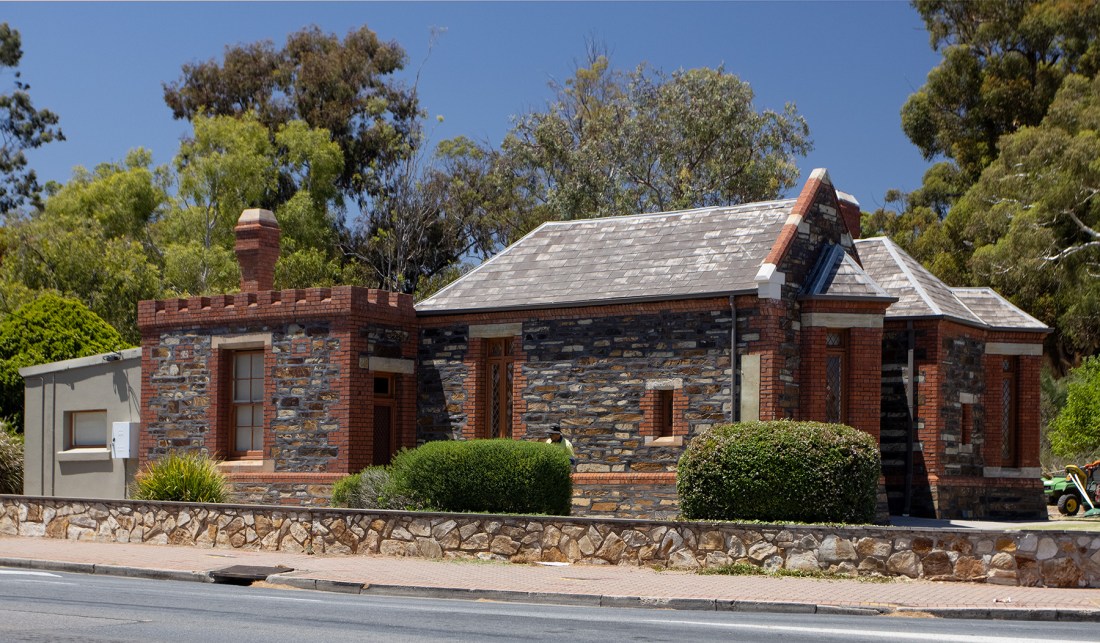 A side view of the gatehouse. Photo: Tony Lewis/InDaily

He said the National Trust was opposed to the demolition of any state heritage-listed place, because to do so defeated the purpose of the heritage listing process.

He expected a strong reaction to the Government’s decision from the community.

Keith Conlon, the chair of the South Australian Heritage Council, expressed his disappointment, noting the particular significance of the Waite precinct.

“It’s very disappointing that we lose any state heritage place,” he said.

“This one is particularly symbolic.”

He said he accepted that the current heritage legislation allowed the government to demolish heritage places on land it owns or acquires in the public interest.

Wingard said retaining the gatehouse in its current location” would require the full acquisition of 18 additional properties and partial acquisition of another seven and a report has also found the structural integrity of the Gatehouse would be at significant risk if it were to be removed”.

“We will work with Heritage SA and the community on opportunities to archive the Heritage context of the Gatehouse, and explore other opportunities within the local area to improve State Heritage assets, including up to $2 million dedicated to support these activities.”

The road widening that will lead to the gatehouse’s destruction is part of a $100 million federal and state-funded project to upgrade two intersections on Fullarton Road – at Cross Road and Glen Osmond road.

The project is designed to cut travel times and improve safety.

Wingard said early works were expected to begin on both projects in 2021.

InDaily asked Wingard’s office why he suggested the study found relocation wasn’t feasible, and sought a response on the criticisms from the National Trust and the university.  We did not receive a response before the publication of this article.