SA Police Commissioner Grant Stevens told ABC Radio Adelaide this morning that the Government was considering whether to follow New South Wales’ lead and mandate the use of scanning and QR technology in all licenced premises.

NSW Premier Gladys Berejiklian yesterday flagged that she would introduce legislation after a Sydney restaurant did not comply with a requirement to record the contact details of all patrons, making it difficult for contact tracers to locate diners who came in contact with a positive case.

The SA Government is currently in contract negotiations to introduce contact tracing technology here, but it is not yet clear what will happen to venues or patrons who fail to comply.

“We are talking about whether this is going to be mandatory,” Stevens said.

“It may well be a requirement for certain types of premises to have a QR code or use the Scan Tech technology, but we’re not yet settled on the policy position, I suppose, in terms of whether it will be a mandatory requirement to enter a premises that you do this.”

Stevens said the QR technology would provide a “uniform process” of storing data in one location, to allow authorities to isolate people within about 48 hours if they come in contact with a person who has tested positive for COVID-19.

He said the Government was “hoping” that the technology, which is already operating in New South Wales and Queensland, would be available in South Australia “in the next couple of weeks”.

“You get your phone, you scan the QR code, it will ask you to enter your details, which it will remember – you really only have to do that once – and it will give you an indication that your details have been accepted and you’ve basically logged yourself into that premises.

“That means that in the unfortunate event that we do have an outbreak that is linked to a particular establishment, we will be able to tell almost immediately who was there at that time, which means we can get in contact with those people, get them to quarantine, find out if they’ve got symptoms and really ring-fence the virus so we don’t have the Victorian situation in South Australia.”

Authorities are also looking to introduce “Scan Tech” technology, which is used to verify people’s identity in licenced premises.

“People on the premises – say a hotel – will scan your ID like a driver’s licence or business card – something that’s got your details on it – so we know you were at the hotel (and) we can come and contact you if there is an outbreak,” Stevens said.

Venues would be given the option of using both the QR and Scan Tech technology, or only one.

Stevens said yesterday that the data would be dumped after 28 days and only used to track people if they come in contact with a known case of COVID-19.

Australian Hotels Association SA general manager Ian Horne told InDaily he supported the introduction of QR and Scan Tech technology as a precursor to lifting the ban on stand-up drinking inside premises.

But he said that support was contingent on the technology carrying no cost or staffing burden on venues.

“It all depends on the complexity of what they’re proposing and we haven’t been consulted in any detail,” he said.

“We’d be saying it should be of no cost to the industry because if this is to apply to every single hotel – half our industry is small to medium-sized business, half of the pubs are in regional areas – so they just don’t have the capacity.

“It’s a hand-to-mouth existence what we’ve all been through, so we would have a high expectation that there should be no cost on the venue and that way there will be a high level of cooperation.

“Success must see the hospitality industry being brought into the equation to make sure what’s proposed will actually work and does not impose any additional cost or burden on businesses that can’t afford it.”

“It’s just me and (co-owner) Ben in the pub at the moment – we were the only two that qualified for JobKeeper – so controlling everyone coming through the door won’t be possible,” he said.

“There’s no way I can afford extra staff and security to do that.

“It’s been about six months now without community transmission – we’re just tired and annoyed about not being able to get back to normal.” 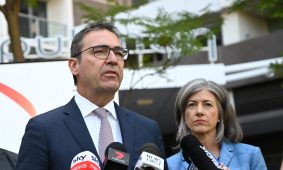 But Exeter co-owner Kevin Gregg said the move “seems like a step in the right direction”.

“I don’t think we will have to go out and purchase anything,” he said.

“I think contact tracing is in the best interests of keeping people safe in the future.”

Horne said the majority of people who visit licensed venues would have a mobile phone that is capable of reading QR codes, but for those who don’t, it was likely pen and paper forms could be used as an alternative.