The State Government last week launched its energy and mining strategy, ‘Building on our Strengths – South Australia’s Energy and Mining Strategy,’ in which it recommitted to a 100 per cent net renewable target by 2030.

It followed a strong week of action in the renewables sector, with the state achieving 100 per cent of its demand from a combination of rooftop and large scale solar for a 30-minute period on one day.

A few days later, on Sunday, October 11, all energy demands were met by solar panels for just over an hour.

While the Australian Energy Market Operator said it was the first time in Australia a state had been able to sustain itself on solar power alone, the combination of wind energy and rooftop solar have previously allowed the state to meet its electricity demand entirely from renewables for more than eight consistent hours.

Earlier in the month, the state energy demands were met for a portion of a day from wind power entirely as well.

“Much more so than an absolute 100 per cent target,” he said.

“We use only about 6 per cent of the power in the National Electricity Market, but we have the wind and solar resources to generate much more than that.

“The critical thing is not the generation mix but the outcome the system provides to SA industry and households. Is the grid as a whole affordable, dependable and clean?  SA’s plans look compatible with that.”

He said while the price of wind and solar were being driven down, operating a renewables-heavy grid required flexible demand response, energy storage and dispatchable generation.

“With stronger connections to the other states it will be manageable to export at least as much renewable energy as the nonrenewable power we import to help fill gaps in supply,” Myatt said.

“Finding the best mix of technologies for cost, reliability and emissions at the national level is a big challenge.

“It’s far from settled whether an absolute 100 per cent renewables will be the right answer nationally, or a high share supplemented by other clean energy sources.”

“The government ambition outlined by the minister is net-100 per cent renewable by 2030,” Roberts said.

“My guess is that we will surpass that before 2030.

“For a short time there, SA Power Networks met all of its energy needs from the sun and 73.6 per cent of that state demand was actually from rooftop solar.”

He said between January and September the Network had received close to 40,000 applications to install rooftop solar across the state, which was about the same number as for the whole of 2019.

He said the high rate of rooftop solar uptake suggested the challenge would be managing energy stability.

“We’ve gone basically in 10 years from very, very little solar to one-third of customers or about 270,000 customers now with solar on their rooves,” Roberts said.

“They’ve moved from being consumers to being generators as well, and the network was never configured and built for that, it was built to be a one-way network.

“The reality is, networks are built to a capacity to meet peak demand, which is 6 O’clock and 7 O’clock at night, but now what we’ve seen … is very low demand and this creates the challenges AEMO (the Australian Energy Market Operator) sees in managing the supply of the network.

“It also creates challenges for us in the supply of the distribution in terms of maintaining voltage and allowing people to export.” 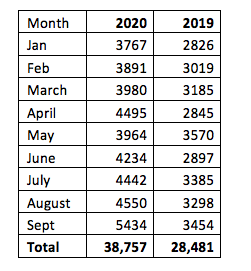 He said the state electricity distributor was looking for ways to apply “flexible exports” which would enable more rooftop solar in areas which were reaching the limits of their capacity.

“The exports will be a smart solution to aid further in the way we manage large amounts of solar in the network,” Roberts said.

“As we’ve got more and more solar in the network that pushes up voltage in local networks, particularly when the network becomes constrained or highly loaded with solar, and at certain levels of voltage an inverter on your home will turn off and stop exporting to the grid and maybe turn off your panels.

“We’ve been installing some voltage management systems in our network … and this will allow us to manage voltage as we need to because, in the middle of the day, when demand is low and solar exports are high, we need lower voltage.

“But at the peak time of the day when solar is no longer generating and energy is at its highest, we actually need to get more energy through to get energy to the customers.”

Roberts’ comments followed a decision in August which allowed authorities in South Australia the power to deliberately trip existing rooftop solar panels, in a bid to prevent a state-wide blackout.

Earlier this month, the State Government opened construction of the country’s largest wind-solar hybrid plant and the second stage of the Lincoln Gap wind project.

Spanish energy company Iberdrola’s $500 million wind and solar hybrid project is set to be a combination of 270MW of wind generation and 110 MW of solar.

Meanwhile, UniSA research fellow Stephen Berry told InDaily that investors were looking to back renewable energy assets, which had fast-tracked the number of solar and wind farms being developed.

“I don’t think people can grasp how quickly the world is changing in this space. We go ‘can we really do it in 10 years’?”

“Well how did we go from having the vast majority of our grid from fossil fuels in coal and natural gas to 100 per cent renewables on some days in the period of about 12 years?

“In South Australia, because we had the iron triangle, we’ve built significant electricity infrastructure all the way up Whyalla, Port Augusta and Port Pirie, and that’s unusual because that’s where there is a lot of sunlight, very consistent sun and very consistent wind.

“And because our solar and wind resources are so close to high voltage wind lines that means the economics of renewables in South Australia is better than pretty much anywhere else in the country.”

He said the challenges for the state’s renewables sector would be producing twice as much energy as required.

“We’re going to have to produce twice as much as we actually need at any one moment in time. We have to have a market to send the rest to, because there are lots of times when the sun isn’t shining and the wind isn’t blowing – and so it’s a net issue.

“So that means we’re going to have to build far, far more than we actually need to provide for South Australia to allow for a net 100 per cent renewables.

“We need inter-connectors, and of course we need to have storage to maintain the quality of the electricity.

“If you’re going to invest and you’re going to spend $1 billion dollars on a very big solar and wind power plant then you want to know that the market is going to be there for you to sell this.”