Lucas told InDaily on September 1 that he had decided to change official guidelines to require public reporting on the proposed budget for all Government advertising and marketing campaigns worth more than $50,000 as they began, rather than only publishing evaluations after campaigns had ended.

However, as of yesterday, despite numerous Government campaigns being approved in September, there was no reporting on the Department of the Premier and Cabinet website, as required by the new guidelines.

After InDaily inquired yesterday about the lack of reporting, the body that oversees government advertising campaigns – the Government Communications Advisory Committee (GCAC), chaired by Lucas – published its report for September.

That report shows that at least six campaigns have been approved since Lucas made his September 1 promise – including five on that day – worth a total of more than $8.8 million.

Lucas defended the near two-month lag in reporting today, saying that under his new guidelines, he expected information to be published in the month following approval of campaigns.

He also insisted the new measures still provided much greater transparency than in the past (scroll down for a full statement from the Treasurer).

The bulk of the new spending approved in September – more than $5 million – is earmarked for inter- and intra-state tourism campaigns, to capitalise on South Australia’s relative success in containing the coronavirus. (Solstice Media, publisher of InDaily, receives Government advertising spending from time to time, including tourism campaigns.)

An additional $1.5 million was approved on September 1 for a campaign to attract New Zealand tourists to SA – well before the so-called travel bubble with our trans-Tasman neighbour was approved.

The GCAC report says the money will be spent on an “international campaign to encourage New Zealanders to travel to South Australia when able”.

By contrast, another substantial campaign – worth just under $1.2 million – is directly targeted at South Australian voters.

Approved on September 27, the “infrastructure campaign” – designed to “raise awareness of the government’s record investment in infrastructure across the state” – has sparked a change in political rhetoric from government MPs, from the Premier down to backbenchers.

The advertising insists the Government is “building what matters” – “because the things that matter to you, matter to us”.

The messaging has been echoed in coordinated political rhetoric by the Government in recent weeks.

Liberal marginal seat MPs, ministers and Premier Steven Marshall are using the messaging in their social media campaigning ahead of the State Budget in November, many including the hashtag #BuildingWhatMatters. 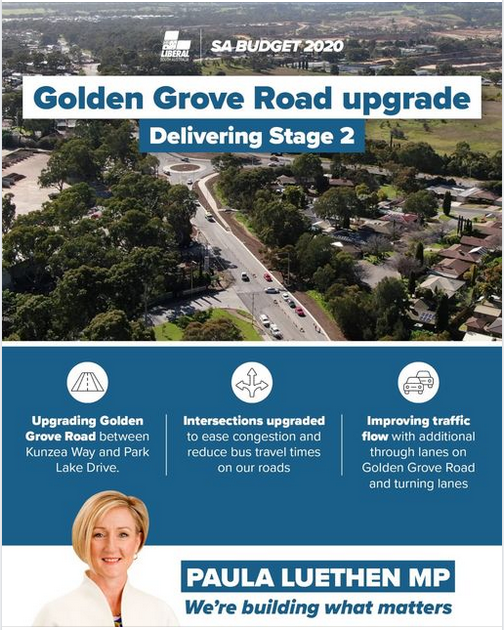 A screenshot from Member for King Paula Luethen’s Facebook page. Similar messaging is being used by other Liberal MPs. 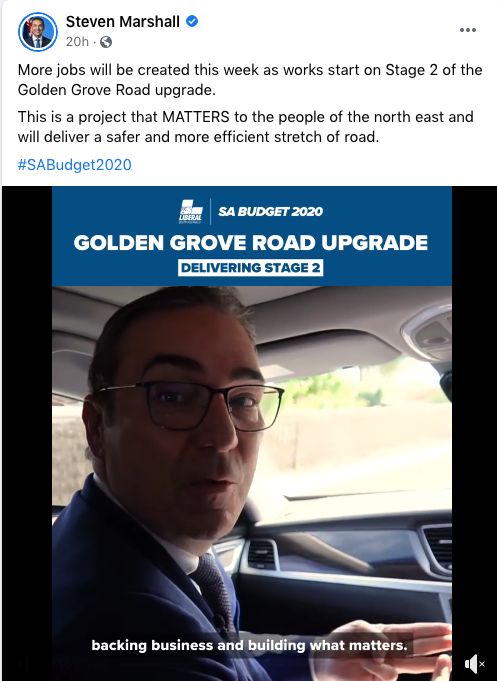 A screenshot of a video on Steven Marshall’s Facebook page.

Announcing Government funding for road maintenance projects this week, Marshall said: “This is another part of our plan to keep South Australia safe and strong, by creating jobs, backing business and building what matters.”

Government rules explicitly prohibit the use of paid advertising campaigns for party-political purposes.

The rules also state that public funds cannot be used for paid advertising when “members of the government are named, depicted and promoted in a way that could be seen as excessive or gratuitous” or “it can be interpreted as political”.

In this case, the main advertising campaign does not include politicians, but supplementary social media posts, media releases and interviews with politicians have been used to explicitly reference the paid campaign messaging.

InDaily asked Rob Lucas whether the campaign could be construed as political, given it is promoting the Government’s broad infrastructure spend, rather than providing direct information about individual projects.

“The infrastructure campaign is an important initiative to inform South Australians about where their money is being spent to build and upgrade roads, schools, hospitals and affordable housing across the state and create jobs,” he said in response.

“The campaign encourages South Australians to visit sa.gov.au to learn more about the infrastructure projects and jobs being created in their local area. It also engages the private sector to register their infrastructure projects on the website, which also provides helpful direction to local businesses who wish to gain access to project tender information and job seekers pursuing employment.”

InDaily reported in July that GCAC had scaled back its public reporting on communication campaigns’ cost and effectiveness.

The GCAC was formed in July 2019 and, as of June this year, had published one evaluation report for the financial year. In the previous financial year, the Government had reported monthly on campaigns’ cost and effectiveness.

In response to InDaily’s questions in July about the frequency of reporting, Lucas promised to review the guidelines for reporting on government advertising.

On September 1, he said he had approved an amendment to the guidelines to require additional reporting and greater transparency about the cost of campaigns.

In addition to the rules requiring public reporting of the total cost and an “evaluation summary” for each approved communications initiative, typically done after its completion, the GCAC would now publish the cost of each campaign as it begins.

“This enhanced reporting will ensure South Australians are better informed about Government communications initiatives’ associated costs at the start of a campaign period, not just at the end,” Lucas said.

“The total cost and an evaluation summary for each communications initiative above $50,000 (ex GST) will continue to be published on the DPC website.”

However, the new guidelines – effective from September – don’t specify a timeframe for reporting campaigns.

They simply say: “To further improve transparency, the proposed budget, total cost and an evaluation summary for each communications initiative (above $50,000 ex GST) will be published on the DPC website.”

InDaily has asked Lucas how transparency has been improved, if the timing of reporting isn’t specified.

“The September report was approved by me in the past week and it has been subsequently published,” he responded. “As per the new guidelines, communications initiatives (above $50,000 ex GST) approved since July 1 are now published, together with their proposed expenditure.