Premier Steven Marshall was the keynote guest at a Property Council function at the Adelaide Convention centre yesterday, with the 450-person gathering spruiked as the biggest of its kind in SA since the onset of the COVID-19 pandemic.

Marshall told the audience while the vast majority of public servants were now back in the office, he wanted to see more businesses abandoning Zoom meetings in favour of returning to city offices.

“But a lot of that is driven by the directives that national and international companies are giving to all of their employees, not the directions of individual businesses based in SA – and certainly not the direction of the State Government.”

Marshall said it was “incumbent on people in SA” who worked in the local arm of national or international firms “to be telling that story up the line in their organisations about how safe it is here in SA, and how productivity will improve if we get people back into their offices in the CBD”.

“It’s really important that the business community starts to model the types of behaviours that we want,” he said.

“Having nearly 500 people in the room [at the luncheon] is actually very positive, because it’s legal to do – it has been legal for quite some time,” he said.

“Each one of you should be saying to your organisations, ‘instead of continuing with Zoom meetings, instead of cancelling the Christmas party or awards night for the organisation and leaving that to 2021, you will have an economic impact on the state and employment if you can start bringing those events forward’.”

SA COVID-19 restrictions still impose a cap of 150 people for weddings and funerals, with gatherings at private residences limited to 50.

In a public outdoor space, gatherings are limited to 1000, subject to the ‘one person per two square metre’ rule.

Events such as yesterday’s are subject to individual COVID management plans, but the Government is encouraging industry to stimulate the economy through functions held within current guidelines.

Marshall said that businesses in the CBD had been “disproportionately hit” by the pandemic’s economic fallout, noting the Government had already targeted stimulus and support to this area – and declaring that will be expanded in next month’s state budget.

“It works in a virtuous cycle – the more people that are employed, the better returns there are going to be for the property sector,” he said.

“I honestly think COVID has given us an opportunity to sell our state in a way that we haven’t before… a lot of the global companies are saying ‘why do we have our head office in a major city, where we’ve got people in a big tower?’ I don’t think employees want to be in that big tower anymore [and] it can often be very expensive in some of those major cities around the world…

“So the off-shoring many of our global companies have done, I think those companies will be looking to bring those people back to Australia [and] cities like Adelaide will be very, very compelling going forward.”

But Deb Coakley, Sydney-based Executive General Manager of Funds Management at real estate investment firm Dexus, told a panel discussion at the event the “investment thesis for Adelaide” had to move beyond “that low-cost thematic flowing through the discussion in the past”.

“Now’s really the time to change that – there are some advantages here in terms of the diversity of skills and specialisations that Adelaide has that we really need to highlight,” she said.

She noted there was significant Government planning in areas such as health, ports, aviation and aerospace industries.

“We spend a lot of time discussing with investors the merits of Adelaide and frankly, we’ve knocked the whole low-cost component right to the bottom of that list because, frankly, it’s got a lot more to offer,” she said.

“We’ve actually got to get our promotion and rhetoric much more focussed on, where’s the value outside of purely just occupational cost?” 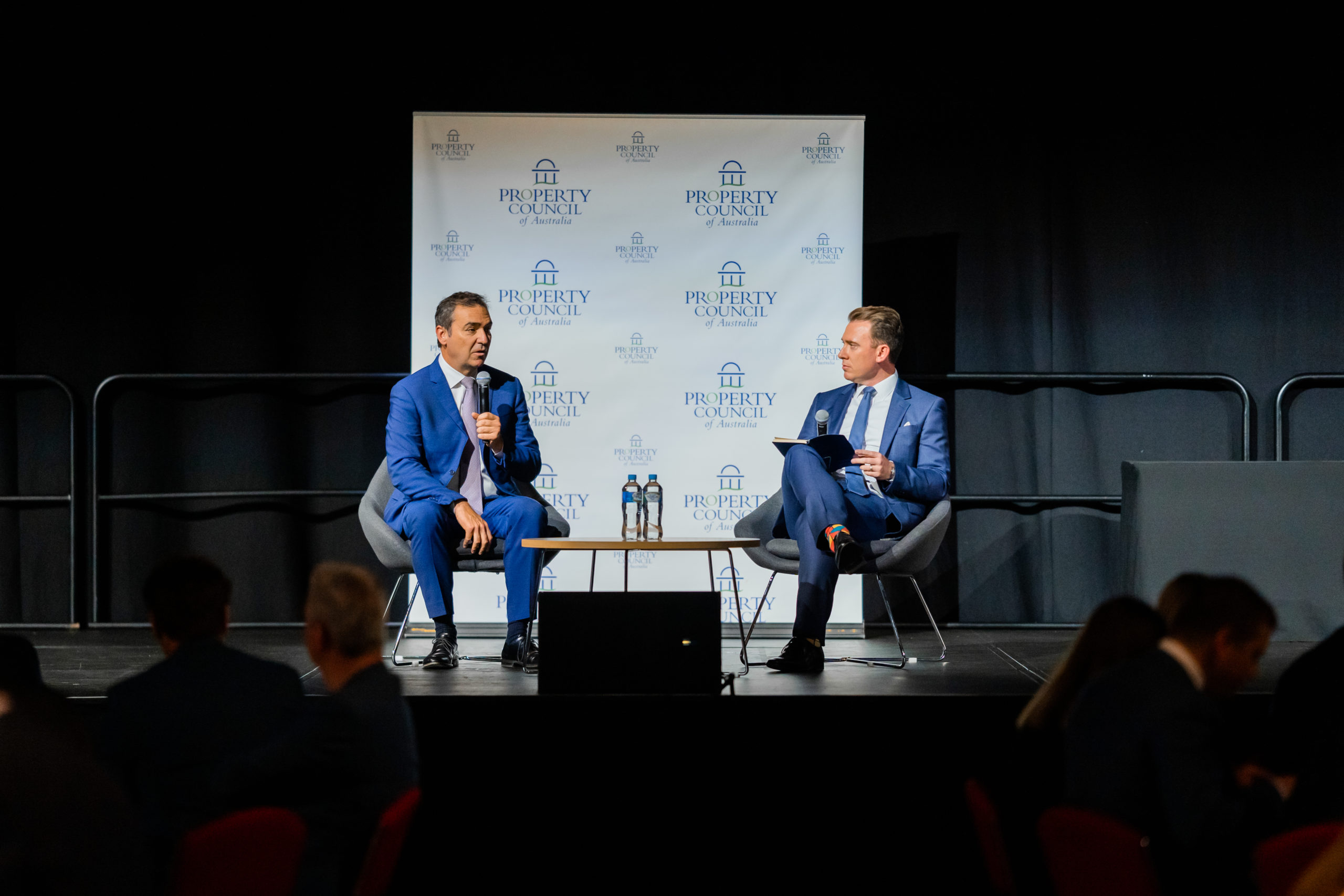 Marshall interviewed by the Property Council’s Daniel Gannon at the event. Photo: Metric

Property Council data suggests Adelaide CBD office building occupancy has grown each month since July to sit at 67 per cent in September – higher than Sydney, Canberra, Brisbane and Perth as well as lockdown-hit Melbourne.

National Property Council president Stephen Conry, head of leading commercial property services firm JLL, told a panel discussion at the event he estimates the rate in Adelaide would now be higher than 70 per cent.

“It’s great to see Adelaide leading the way – of course businesses should be back in the office,” he said.

“It’s ridiculous that so many corporates and government departments aren’t back in the office – it’s perfectly safe, [and] it is far more productive.”

He said “the problem is too many CEOs and government leaders are surveying their staff” about whether they wanted to continue working from home.

“Why would you? Of course staff want to stay at home and work [but] they have to get back to the office,” he said.

“It’s far more productive, and if you’re back in the office in the CBD you’ll have more thriving CBDs – you need thriving CBDs for a growing economy.”

Property Council SA executive director Daniel Gannon said while more than two thirds of workers had already returned to CBD offices, “the viability of our city and its businesses, cafes and restaurants is reliant upon all workers returning to their office workplace”.

“To a large extent, the private sector is dragging its feet rather than government – a number of businesses that are based abroad or interstate are still maintaining ‘work from home’ policies without any consideration of our positive local circumstances, which is hurting small business owners and deactivating the CBD,” he said.

“If business leaders don’t implore their people to return to the office, Adelaide’s CBD and South Australia’s economy will face a protracted period of pain.”