Minister David Speirs told InDaily he decided this morning to reject a request from Australian developer Charter Hall to intervene in a Heritage Council decision to list the 1930’s art deco façade of the Sands and McDougall building on the state’s heritage register.

The Art Deco and Modernism Society of Australia describes the building, once housing a printing press, as “the first art deco façade in South Australia and the oldest-surviving art deco façade”.

Charter Hall lodged plans with the State Commission Assessment Panel in July to demolish the building and neighbouring Southern Cross Arcade to build a 15-storey office tower extending from King William Street to James Place – making it one of the biggest office blocks proposed for Adelaide.

In August, one month after Charter Hall lodged its plans, the Heritage Council decided to provisionally list the building at 64 King William Street as a state heritage place, describing its “highly intact” front façade of coloured cement, copper panels and metal grilles as an “outstanding and early example of art deco architecture in South Australia”.

Consultation on the provisional listing ends in November.

Speirs had the power to overrule the Heritage Council if he deemed it to be “in the public’s interest”.

I was quite disappointed that it got to this stage

But he said he made the “unenviable” and “tricky” decision to support the council’s decision as the “uniqueness of the façade is such that it plays a very significant role in the art deco movement in South Australia”.

“I met with a range of stakeholders in my role as the responsible Minister and I consulted widely on both sides of the debate,” he said.

“As I moved through the process I learned more and more about its value and felt strongly that the developer could incorporate it into the design of the new build.” 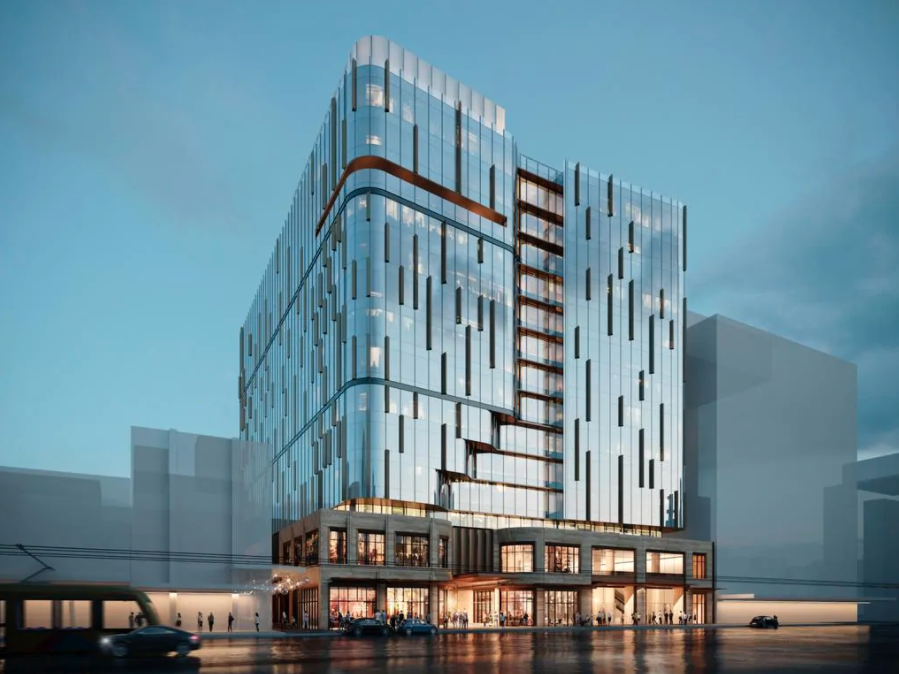 Speirs said he informed Charter Hall about his decision this morning, after it asked him to overturn the Heritage Council’s decision.

He said the Government supported the development as a “state significant economic development project”, but it was his “strong view” that the local heritage-listed façade could have been “relatively easily incorporated into the development”.

“It’s my view that the developer didn’t place enough significance on the status of local heritage listing,” he said.

“At the end of the day local heritage listing is not an insurmountable protection, but it’s there for a reason.

“The developer knew it when they purchased the Sands and McDougall building and came up with their proposal for a new building on that site.

“This wasn’t a surprise to them, so I was quite disappointed that it got to this stage.”

Charter Hall’s regional development director Simon Stockfeld told The Advertiser in August that the company hoped to start construction on the tower early next year, with completion scheduled for the middle of 2023.

A State Government planning spokesperson told InDaily last month that Charter Hall had placed its development application “on hold” but had not withdrawn its plans.

He said the society supported new development on the site, provided the front-facing façade and awning of the Sands and McDougall building were retained.

“Being the first art deco façade it’s an important marker,” he said.

“It’s also in remarkably good original condition other than needing restoration, in particular, the original rendered finish has never been painted… which is compelling reason to keep this façade for all-time as an excellent example of art deco pretty much as it was originally built.

“We think it’s very easy to integrate that into the new building design.”

O’Loughlin said it was “incredibly disappointing” that Charter Hall had paid “no attention whatsoever to the building’s local heritage-listing”.

“That is completely inappropriate,” he said.

“If the Government stands by while successive local heritage listings are demolished you are undermining the entire system of heritage protections and it will result in every council and every heritage lover seeking state protection for every single item on the local heritage register because they’ll see that’s the only one that works.”

Adelaide City Council Lord Mayor Sandy Verschoor on Tuesday night was forced to withdraw a motion she lodged calling for the council to support the state heritage listing of the Sands and McDougall building, after it was revealed doing so would contravene a previous confidential decision relating to a toilet block on James Place, which borders the Charter Hall site.

The council will meet next Tuesday to reconsider the motion.

Speirs said the public could still submit feedback on the decision to list the Sands and McDougall building on the state heritage register.

“In the meantime, the developer can and should proceed with their development application based on this new information that the building will be protected under state heritage listing and we will be there to work really closely with them,” he said.

“It is our intention that our insight and experience and resources of government around heritage preservation and design will be provided to the developer to give them the support to do this well.”

“On the other side of the ledger today I’ve made sure that the Sands and McDougall façade will be listed,” he said.

“It is a difficult job sometimes – you’ve got to weigh up a lot of things – but I think we’ve made the right decision on both of those items.”