A “preliminary” costing for the project was revealed this month to be $1.895 billion, but Health Minister Stephen Wade dismissed that figure as outdated.

However, a firm figure won’t be known until a business plan is released next year, with Wade insisting the new hospital will now be open for business in the 2025-26 financial year – two years later than originally planned.

Drilling works began today on the site, adjacent to the new Royal Adelaide Hospital – for which the previous Labor government had to shell out more than $69 million in remediation costs in a settlement with consortium builder SA Health Partnership after a bitter legal row.

SA Health director of infrastructure Brendan Hewitt told media today while preliminary soil testing had previously been done to a depth of one metre, the current operation would test to up to 50 times that depth, “so we get a better idea of the soil structure”.

Asked if he expected to find similar levels of contamination that bedevilled the previous build, he said: “That’s part of the purpose of the testing.”

“The purpose of doing this test is so we know with confidence what we’re dealing with and can put in contingencies,” he said.

“We are purely doing it to determine whether there’s contamination… once we’ve done that work we’ll be better informed for the business case in terms of putting in contingencies.”

Asked whether the project cost or timeline could blow out, he said: “That’s very much dependent on what we find.”

“We have quite a journey ahead of us – it’s quite possible if we find something we need to deal with we can deal with it well and truly in the time[frame], but that will be determined by the evidence from the testing,” he said.

WCH CEO Lindsey Gough said: “Whilst we acknowledge that the timeframe is tight, the work going extremely well [and] we’re well on track to deliver the final business case next year.”

Asked whether she expected the cost to exceed the $1.895 billion identified by last year’s steering committee report – finally released this month – she said: “All I will say about that is that the taskforce work was at a point in time.”

But she said she “can’t comment” on whether that cost was likely to increase “because the work hasn’t been completed”.

The steering committee report, overseen by WCH chair Jim Birch, painted a scenario that allowed for significant contingencies, with Wade downplaying its significance today – despite his office keeping it under wraps for 18 months despite an ongoing Freedom of Information battle with the Labor Opposition.

That culminated in a direction from the Ombudsman for SA Health to release the report early this month, at which point the Government instead dropped the costing details to News Corp before finally handing the documents over to the Opposition.

The report included a preliminary cost estimate of $1.895 billion, comprised of $195 million for site preparation and car parking works, $1.143 billion for construction and equipping of the hospital, $241 million for cost escalation to project completion in 2025-26 and $316 million in project contingency representing 20 per cent of total project costs.

It also includes $100 million for ICT infrastructure “to be delivered as part of the overall construction cost by the building contractor to enable the hospital building to function”.

Wade said “the reality is we’re continuing to work with clinicians as to what they need in their hospital” and “the business case will inform the costings”.

“Labor’s relying on a briefing that’s 18 months old,” he said.

Asked why he had been secretive about the steering committee report, Wade said: “I think the figures from the beginning of last year are not particularly useful, in terms of a project that’s going to take years to design and deliver.”

However, he maintained “the project will still be completed in the 2025-26 financial year”. 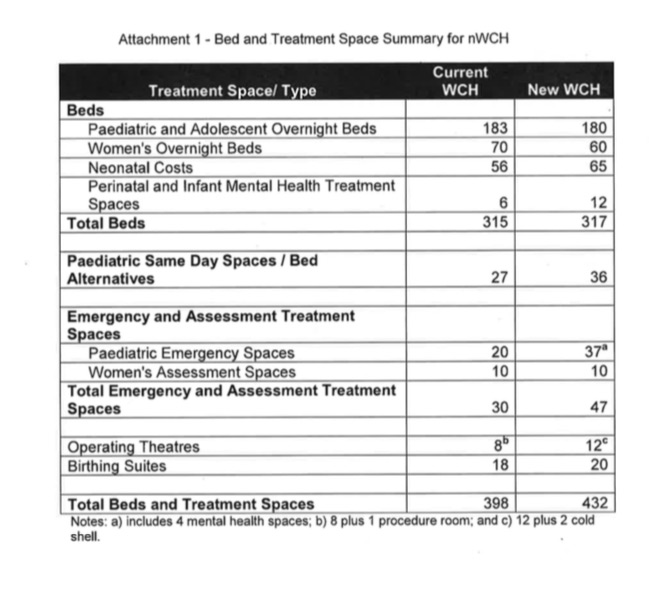 An excerpt from the steering committee documents released under FoI.

The documents released also suggest there will be 172 fewer car parks than at the current WCH, with less on-street parking available at the city site.

Wade said planning for car-parking formed part of the business plan, suggesting patients would be encouraged to utilise public transport.

“Many people don’t have cars… this site has very good access to public transport,” he said.

“This will be a facility that will continue to support women and children for years to come,” he said.