According to the SAPC, the state’s National Health and Medical Research Council (NHMRC) grant success rate plummeted from a high of 28 per cent in 2010 to just 18 per cent in 2019, amid increasing competition from east-coast universities and research institutes.

The commission cites a focus on buildings rather than people, a loss of health and medical research leadership positions in public hospitals and universities, and disruption resulting from the transition of research centres away from the old Royal Adelaide Hospital to the new “state-of-the-art” “BioMed City” precinct further west of North Terrace as causes for the decline.

The findings follow a five-month inquiry into the effectiveness of health and medical research funding in South Australia, which was ordered by Premier Steven Marshall in February amid concerns the state was lagging behind interstate rivals.

According to a draft report released by the SAPC yesterday, the state and federal governments have over the past two decades listed medical research growth as a top priority for SA.

But despite the state investing heavily in infrastructure – including spending $200 million on the SA Health and Medical Research Institute (SAHMRI), $100 million for the two university buildings in the BioMed City precinct and $273 million on the yet-to-be-completed SAHMRI II – grant funding is drying up.

Over the past five years, SAHMRI was awarded $18.5 million in NHMRC grants, while Adelaide University received $119 million, Flinders University $44 million and UniSA $68 million.

According to the draft SAPC report, Adelaide University’s share of NHMRC funding has declined, while the two other public universities have increased their share and SAHMRI’s funding fluctuated.

“The worsening of the state’s HMR (health and medical research) environment occurred as HMR competitors in the eastern states strengthened their capabilities and better positioned themselves to capitalise on the shift in national funding priorities toward larger-scale HMR projects with translational impact,” the report states.

“South Australian institutions also made significant investments, although not to the same degree and with a focus on buildings and not people.”

The SAPC states there is an “emerging deficit of key HMR talent” in South Australia because “HMR workforce development has not received appropriate levels of investment” at the expense of multi-million-dollar new builds.

It also highlights a reduction in support for health and medical research within the Department for Health and Wellbeing (DHW) since around 2010 and a “systematic de-emphasis” on clinical research in public hospitals.

“A number of stakeholders, both within government and in the wider HMR sector, considered that both the OFR’s (Office for Research) mandate and its capacity to deliver it have been severely cut over time and that the current level of resources is inadequate,” the report notes.

“This appears to reflect a reduced priority within DHW on providing state-wide leadership for HMR, and a tight focus on service delivery, health outcomes and reducing costs.

“The perception that there has been a pronounced shift towards service delivery within SA Health following the decision to establish SAHMRI, combined with policy shifts like Transforming Health, has led several stakeholders to argue that SA Health is not in a position to provide a strategic leadership role in HMR.”

SAHMRI was established in 2009 as an independent medical research institute to arrest the decline in the state’s share of national research funding.

The SAPC said it understood that the institute currently receives an annual operating grant from the State Government, which totalled approximately $5.8 million last year.

“The commission is not aware if the State Government has attached any conditions to the annual operating grant, including, for instance, making continued funding dependent on SAHMRI meeting agreed research performance targets,” the SAPC report states.

The SAPC said that while SAHRMI had achieved “some” important successes – including securing research funding, appointing clinical leaders and gaining international recognition –  “it has been challenged by conflicts in its objectives and membership model and by flaws in its business model for medical research institutes more generally”.

It said SAHMRI’s “inherent structural weakness” was that competitive research grants did not cover the full costs of its research activity and it had “potentially unrealistic financial expectations”.

But the commission said an “absence of hard evidence” meant it was unable to determine the net impact of SAHMRI on the state’s ability to attract grant funding.

“The state’s share of NHMRC funding since SAHMRI’s establishment has declined slightly and is in line with South Australia’s population share,” SAPC states.

“SAHMRI appears to have made a positive contribution to the state’s performance over a period where the contribution of other key players, SA Health and the University of Adelaide, has declined.”

“Before SAHMRI’s doors opened in 2013, South Australia didn’t have an independent institute whose sole focus is conducting and translating health and medical research,” he said.

“We had a mandate to work with our state’s universities and hospitals to reverse the trend in the HMR sector here.

“We’re still very young as an institution but can be proud that the commission has recognised our success and the upwards trajectory of that success.” 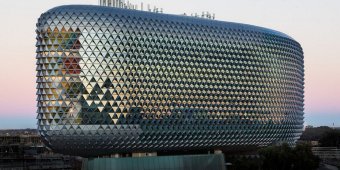 In a statement, Health Minister Stephen Wade described health and medical research as an “important and economy-boosting sector” for the state.

He said the Government was “committed to lift our state into a leader within the clinical and medical research field” and was currently implementing recommendations made in a 2018 review to boost research within SA Health’s local health networks.

“We expect LHN’s to heighten their focus on clinical research and we commissioned the Productivity Commission report because we are determined to rejuvenate the sector and give our brilliant clinicians and researchers the support they need to shine,” he said.

“We look forward to stakeholders’ responses to the draft report and the Commission’s final report.”

The SAPC’s draft report is currently out for public consultation, with a final report due in January.