Professor Nicola Spurrier told ABC Radio Adelaide this morning a South Australian man in his 20s, who self-isolated at the Walkers Arms Hotel late last month after travelling back to the state from Victoria as an essential worker, “did the right thing” by choosing to isolate at the hotel rather than at home where he could infect others.

The man was not aware that he was infectious when he arrived at the hotel on July 27, but later developed coronavirus symptoms and tested positive, leading to his departure on July 29.

He was subsequently found to have infected close contacts, including a woman in her 20s who later visited Roma Mitchell Secondary and Thebarton Senior Colleges, as well as three northern suburbs businesses.

Spurrier told the ABC at about 7am this morning that he also infected a Walkers Arms Hotel employee.

“This gentlemen did attempt to self-isolate correctly and he did the right thing because he went to a hotel rather than his home, but unfortunately quarantine does mean you stay in your room and you don’t have anybody in there and you don’t come in close contact with them,” she told ABC Radio.

“Unfortunately that wasn’t the case because he was able to transmit that to a number of people, one included somebody that worked at the hotel and it just shows how transmissible this virus is.”

Walkers Arms Hotel manager Steven Munro told InDaily this morning after Spurrier’s interview that the only staff member who came in contact with the man – the accommodation manager who checked him in to the hotel – returned a negative COVID-19 test.

He said SA Health advised the hotel that it was not necessary to undertake a deep clean of its premises “as the guest was contained to their room and then removed by SA Health” and that it could continue to trade as normal.

“I’m sure she (the accommodation manager) is going to get plenty more tests in the next 14 days, but as far as we know she got her test back and she’s got a negative result,” he said.

“They (SA Health) said all the way from accommodation through to bistro you’re absolutely fine to go ahead and trade as normal.”

Munro said the hotel had undertaken a deep clean of its premises “off our own back” in an abundance of caution. 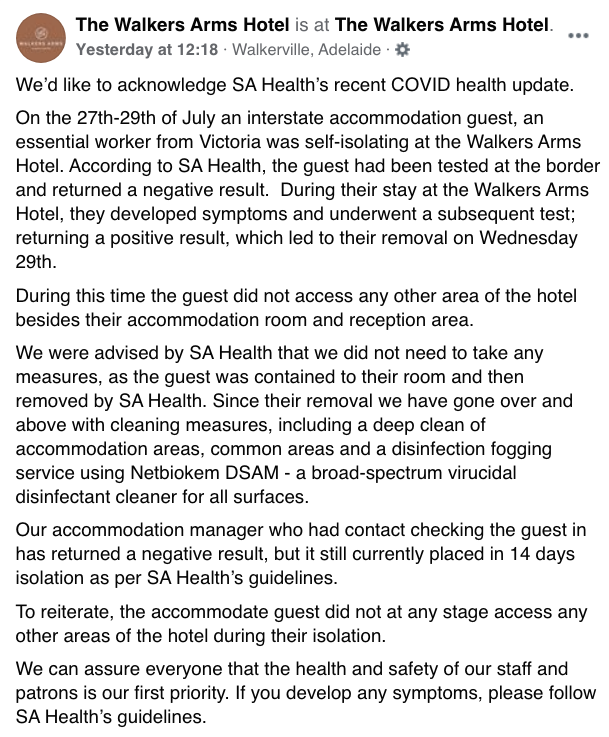 However, at about 1pm this afternoon the Walkers Arms Hotel posted on its Facebook page that it had been made aware – after Spurrier’s ABC radio interview and one week after the infectious man was removed from its premises – that a cleaner in its accommodation department had returned a positive test.

“The staff member is currently in isolation and in good spirits under the care of SA Health,” the post states.

“We emphasise that since the removal of the guest and self-isolation of our accommodation department, we have gone over and above SA Health’s guidelines with cleaning measures, including a deep clean of accommodation areas, common areas and a disinfection fogging service.

“SA Health at no stage advised closure of our venue. We undertook our own measures to ensure the containment of the contact.” 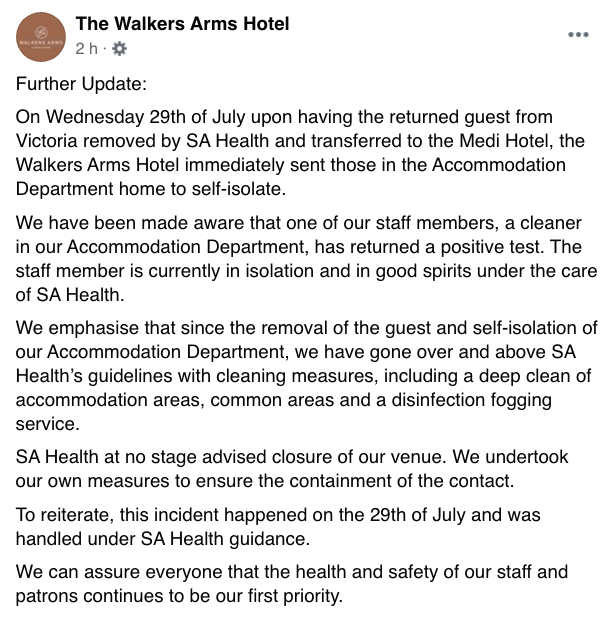 There were no new cases of COVID-19 reported in South Australia today, with one potential case reported on Monday declared to be a negative result.

A spokesperson for Health Minister Stephen Wade said the case linked to the Walkers Arms hotel cleaner was not a new case and it would have been announced within 24 hours of when they tested positive.

SA Health yesterday listed the Walkers Arms Hotel as one of several businesses on alert as a site of COVID-19 infection.

It said people who visited the hotel from July 27 to 29 do not need to self-isolate unless they are contacted by the communicable disease control branch.

InDaily asked SA Health this morning to confirm that a Walkers Arms Hotel employee had tested positive for COVID-19 and, if so, why the hotel had not been directed to shut down if it had been the site of two infections.

In response, a spokesperson referred InDaily to a transcript of Spurrier’s interview on ABC Radio.

“Please refer to Nicola’s interview transcript below that answers your question – I’ve highlighted the part where Nicola discusses the case,” the spokesperson wrote.

It is unclear whether the Walkers Arms Hotel employee referred to by Spurrier is the woman in her 20s who later visited Roma Mitchell Secondary and Thebarton Senior Colleges, a 50-year-old man reported on Monday to have tested positive for COVID-19, or someone else. 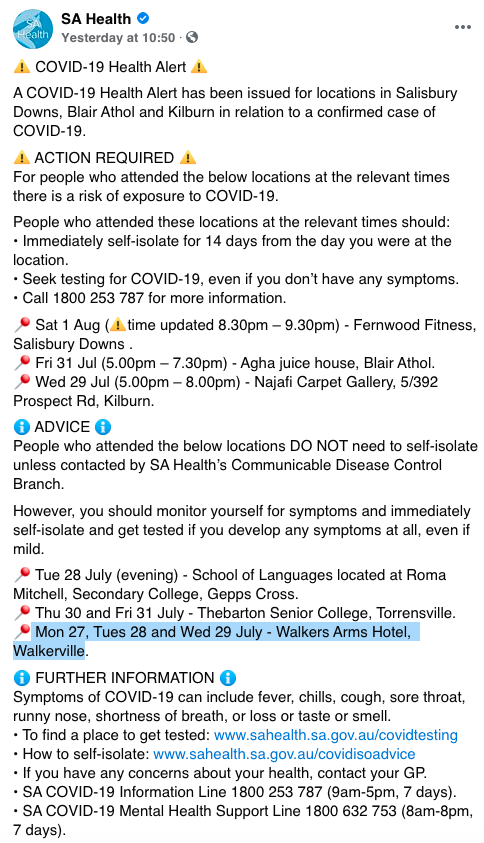 An alert posted on the SA Health Facebook page yesterday.

Health Minister Stephen Wade said in recent months “thousands of people” have come back to South Australia and self-isolated, “many” of whom chose to stay at holiday houses or hotels.

He said it would be “good practice” for hotels to be notified in advance if a person chose to stay at their premises during self-isolation, but the Walkers Arms Hotel quarantine stay was “a private arrangement”.

“We’ve actually expanded the clarity of the requirements for self-isolation in recent weeks,” he said.

The Opposition has today called on the State Government to introduce mandatory supervised quarantine for people arriving from Victoria to stop further infections arising from self-isolation arrangements.

“We are already looking at four hotels that are being utilised to accommodate people who are being repatriated from overseas and also people who are coming into South Australia who are required to undergo supervised quarantine,” he said.

“Each hotel requires a contingent of about 35 to 40 police officers, also nursing staff and security staff, so it is a significant logistical issue to continue to accommodate these people.

“We do have really strict border controls now for people coming in to South Australia and that should reduce the number of people coming in, but we do need to find that balance.

“We’ve already got about 22 per cent of our operational strength deployed to COVID-19 duties, so every time we open up a hotel to accommodate these people that starts to chip in to our ability to do the rest of our job.”

There were today no new cases of COVID-19 in South Australia, with one potential case reported on Monday declared to be a negative result.