EcoCaddy – a carbon neutral micro-transit mobility company – has been offering free, weekly community night rides around Adelaide and the inner suburbs since 2017.

But when coronavirus restrictions hit South Australia, like many other community activities, the group cycling sessions were put on hold.

EcoCaddy founder Daniels Langeberg told InDaily the startup was also forced to stop providing its daily tours and lay off a number of casual staff.

He said one positive take away was the situation gave EcoCaddy the opportunity to begin thinking of ways to diversify its business model.

“There is a word that is being throw around – and that is pivot. Our company has pivoted quite a few times – we’re a startup after all,” Langeberg said.

“We’re not throwing the baby out with the bathwater. We’ve got a really solid business, great community as well as a great client base here in South Australia – but we can’t be reliant on everyone coming back to normal.

“Every sector has been impacted by COVID-19. So, we’re really treating it like a worst-case scenario and it’s giving us freedom to think about how business can grow in the future.”

Named one of InDaily’s 2018 40 Under 40 winners, Langeberg launched Adelaide’s fleet of rickshaw-inspired EcoCaddies in 2015 as a way to solve the city’s lack of short-distance transport options.

Five years on, as EcoCaddy looked for ways to evolve, an influx of South Australian cyclists hit the roads.

Data from the City of Charles Sturt showed the number of riders along the River Torrens Linear Park trail in April increased by 200 per cent on the same month last year. The figures showed 1600 daily riders hit the trail in the April lockdown compared with 800 cyclists per day in 2019.

Meanwhile Norwood-based Treadly Bike Shop manager Sam Neeft said the store experienced an increase in servicing and demand for bikes during the lockdown.

“We’ve been selling a few different bikes because there’s been a shortage. So, some of the stuff that we wouldn’t normally sell quite often has sold a little bit quicker than normal,” Neeft said.

“From what we can see, it’s going to be hard to get bikes through next year – so whatever we can get we’ll get.” 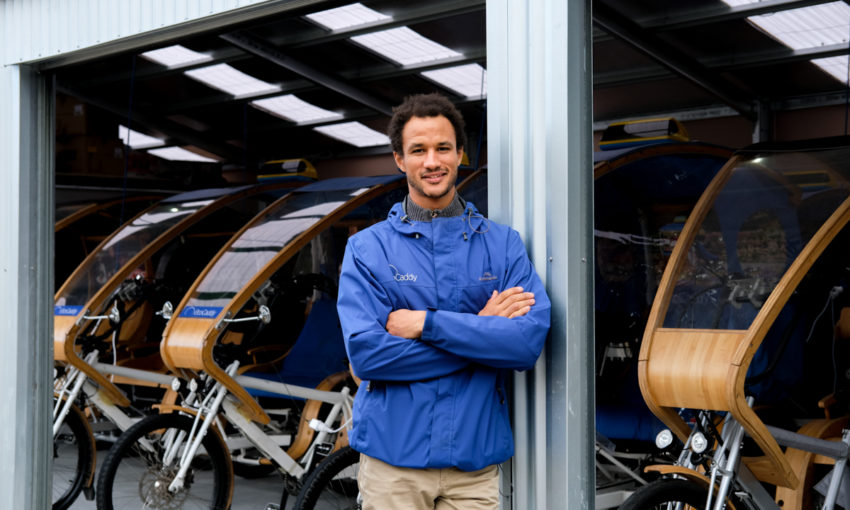 Daniels Langeberg at the EcoCaddy headquarters in the city. Image Johnny von Einem

Langeberg said in response to the demand for bikes, increased trail usage and concern people would stop cycling as they returned to work, EcoCaddy developed its self-guided ride content.

“There was sort of a fear from the bike community that would all go away when restrictions were lifted, and that people would shift to getting in their car rather than using public transport because of a fear of (virus) transmission,” he said.

“We thought ‘is there a way of ensuring people can continue to ride and encouraging new people to get on two wheels?’

“We came up with a very simple answer, which was that we couldn’t offer the rides ourselves – but what if we offered those rides out, free of charge?

“We had done the rides ourselves and had done a lot of mapping. We’ve actually created a lot of content around that … which gave us the confidence to know that what we would offer in terms of self-guided rides would be a really good experience.”

Based on its free community night rides, EcoCaddy has so far mapped 12 urban trails for riders to explore.

Langeberg said the company planned to launch three rides every fortnight until there were a total of 52 trails ranging from about eight to 50 kilometres, which would stretch from the Barossa to McLaren Vale.

Categorised into easy, intermediate and hard trails, the rides are available through the EcoCaddy Self-Guided Cycling Tours app and in printable form on the EcoCaddy website.

“We’ve always been a tech-enthused company. Now we’re really embracing technology even more because we see it as a way to scale beyond geographic boundaries,” Langeberg said.

“The other reason we’ve built these self-guided tours is so people can discover other businesses – like cafes, bike shops and institutions like the museum, which they ordinarily wouldn’t have found.”

Langeberg said part of the impetus to develop an app was as a means to sharing the audience the trail maps attracted with other businesses.

“So that we can help those businesses get more business,” he said.

“It’s a strange time to be an entrepreneur and a business owner, them being one and the same but also completely different mentalities or perspectives on how to do business.

“And now because there are a lot of people with extra time … maybe it’s time to look at starting something yourself.

“It seems that it’s the worst time but it’s actually the best time – this is the big reset.”

Nominations are still open for this year’s 40 Under 40 Awards with judging to commence in August before the awards are held on 15 October.