“South Australia seems to be faring better in both property prices and building activity compared to other states and that is good news,” PointData CEO George Giannakodakis said.

“What we’ve seen across the board in other cities is a fall in property values but one of the key observations is during the COVID period values went up on average for the whole Adelaide metropolitan area.

“It could be because of a significant lack of listings in the marketplace but demand is still outstripping supply.”

Overall, 68 per cent of the statistical neighbourhoods in the report grew in value in the first half of this year with 20 per cent improving by more than. 2.5 per cent since December.

This is a significant improvement on the six months to October 2019 when 56 per cent of the statistical regions reported price declines.

Giannakodakis said this could reflect a lagging property price trend seen in the eastern states just before COVID-19.

“There are more areas in Adelaide now going up than down, which is different to the six months to October 2019 when there were more areas going down in value,” he said.

A PointData trend map for the three months to June – during the peak of the COVID-19 shutdown – shows an upward trend of prices in the majority of Adelaide suburbs.

The CBD, North Adelaide and inner-ring suburbs performed well except for a handful of postcodes on the southern edge of the city and the blue-ribbon suburbs of Gilberton and Medindie.

Several coastal suburbs bounced back from sluggish performances in previous reports but West Beach, Christies Beach and the leafy seaside strip from Glenelg to Brighton continued to struggle.

“During the COVID period some of the inner-city areas have corrected and some of the higher value suburbs that were decreasing in value over the past 6-12 months have come back but some areas are still falling in value,” Giannakodakis said.

“Generally speaking, coastal area have been bouncing back but Brighton and Glenelg seem to be a bit slower off the mark.

“It’s probably a bit of a correction in the market but Brighton and Glenelg also have a high proportion of apartments and there could be an impact there.”

While prices have held, the total number of house, unit and apartment sales in Adelaide more than halved from 10,090 in the three months from March 1 to May 31, 2019 to just 4504 for the same period this year. 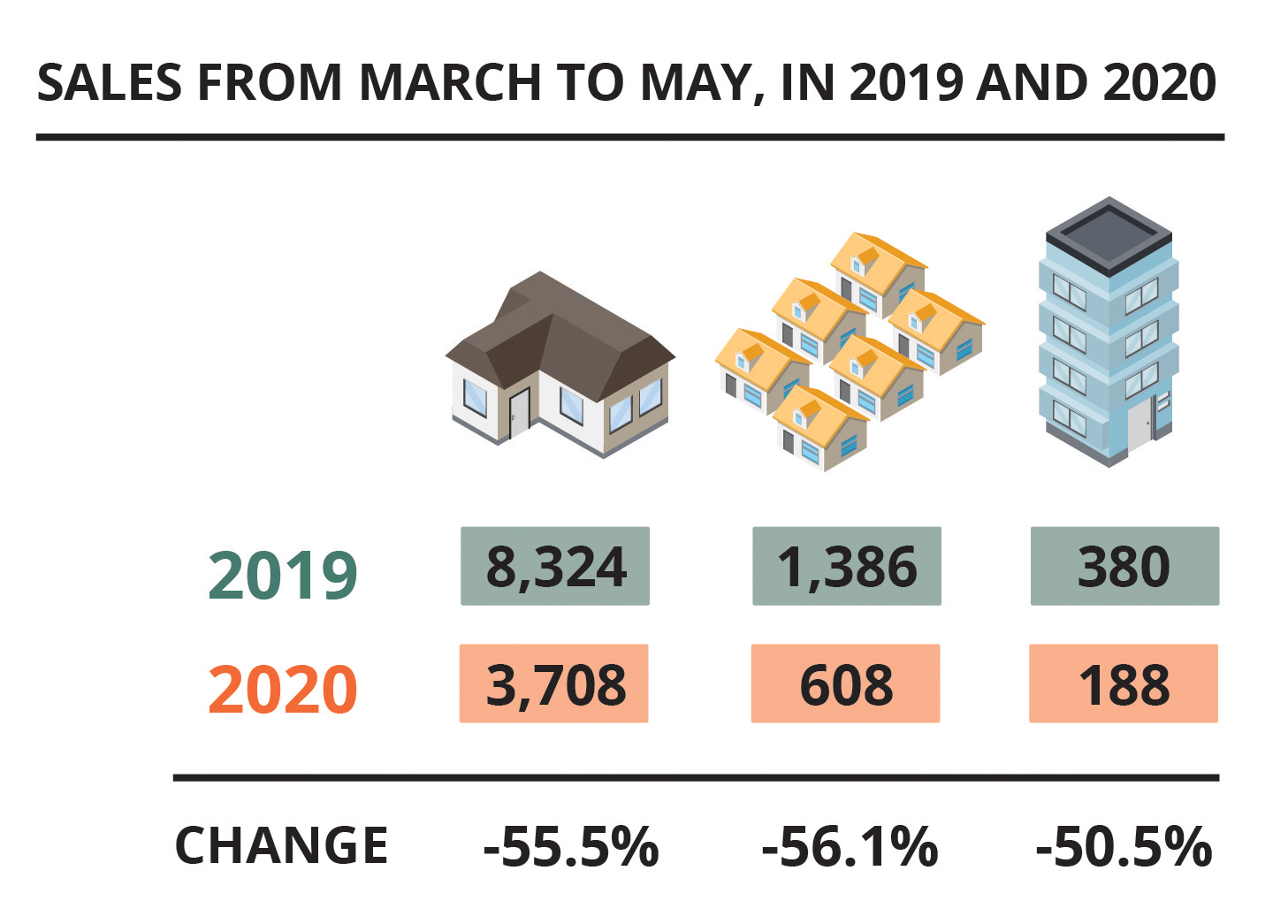 Giannakodakis said the fact that a fall in sales had not resulted in a fall in prices from March to May showed there was still demand despite a lack of supply in Adelaide and physical restrictions on the real estate industry.

“The data suggests there is a small window of opportunity to sell houses while there is a buoyant market but obviously it is still more of a seller’s market at the moment,” he said.

CoreLogic data showed the eight-capital average increase for the quarter was 0.5 per cent and -0.5 per cent for May with Melbourne the worst performer. Only Adelaide and the smaller cities of Hobart and Canberra showed growth during May.

Although CoreLogic’s June figures showed Adelaide prices had reduced by 0.2 per cent for the month, it still performed significantly better than Melbourne, Sydney, Brisbane and Perth. Overall, the eight capital city price for June fell by 0.8 per cent.

“Melbourne in particular has shown a larger decrease in property value compared to other cities but it is the larger cities that are falling,” Giannakodakis said.

In March, economists predicted a 7-10 per cent fall in property values over the next 12 months in Adelaide but falls of that magnitude are yet to materialise.

However, Giannakodakis said industry commentators were concerned about the potential impact in the coming months when macroeconomic stimulators such as JobKeeper and mortgage holidays were pared back or removed all together.

“It’s not as bad as first thought and we may still see a correction but it won’t be as severe as the 7-10 per cent fall they were predicting back in March,” he said.

“We’ve come out of it fairly quickly but having said that, we don’t know what’s in store for us given what’s happening in Victoria at the moment.”