Chief Psychiatrist Dr John Brayley today intervened in three sites of the Southern Adelaide Local Health Network (SALHN) mental health services, 20 months after he began an investigation sparked by multiple concerns raised by clinicians and other staff over many years.

He has revealed he is concerned about the “outdated” model of care used in one of the sites and, more broadly, the processes used for referring and handing-over patients.

InDaily has been seeking an interview with Brayley since October 2018 when he began his investigation into SALHN mental health services – without success.

In a statement released today with the permission of ICAC, Brayley said he had been constrained since January 2019 by the secrecy provisions of the ICAC Act.

He revealed he had been asked by anti-corruption commissioner Bruce Lander to investigate concerns about SALHN mental health services under a section of the Act related to potential maladministration or misconduct.

“Following the commencement of my investigation, in January 2019, certain matters falling within the scope of my investigation became the subject of a referral from the Independent Commissioner Against Corruption, the Honourable Bruce Lander QC pursuant to section 24(2)(d) of the Independent Commissioner Against Corruption Act 2012,” he said.

Brayley has given a preliminary report about the unspecified matters to Lander and SALHN and is awaiting their response.

In the meantime, today he used his powers under the Mental Health Act 2009 to impose temporary conditions on three mental health services in Adelaide’s south: the Adaire Clinic, Noarlunga Emergency Department, and Southern Intermediate Care Centre.

The conditions will be in place until his investigation is finalised and ensure he has direct oversight of care plans and, in the case of Southern Intermediate Care Centre, will limit admissions unless approved by a senior manager.

Brayley said his concerns related to “systems and processes” including referral and handover of patients and the “capacity and capability of community teams to accept referrals of acutely unwell consumers”.

“I also considered that there was a need for additional oversight of the delivery of acute care in the community and in the Emergency Department when consumers are discharged home to community care,” he said.

“In a number of cases I was concerned that telephone reviews were relied on when face-to-face contact would have been preferable.

“I observed that a specific unit, the Southern Intermediate Care Centre (at Noarlunga Hospital), operates on what I considered to be an outdated care model that does not address the acuity of the consumer group it admits.”

In 2018, InDaily reported deep concerns among staff about the functioning of mental health services in SALHN.

A leaked review of the Noarlunga-based services detailed frustration among doctors and nurses about a “lack of a clear and understood strategy, the transparency of decision making, the lack of clear standards for work with appropriate performance measures and varying levels of accountability”.

The review details a “fragmented” service, which has suffered from ongoing staffing problems, including poor planning and patchy staff coverage.

Also in 2018, InDaily reported on then Community Visitor Maurice Corcoran’s concerns about the service, including the death of a patient allegedly discharged too early.

Corcoran’s report to Parliament highlighted alleged “discharge pressure” in the service, according to a psychiatrist from SALHN who contacted him.

“The psychiatrist highlighted a range of examples where he, and colleagues he named, believed it placed clients at high risk,” the report reads.

Back in 2018, SA Health insisted it was implementing reforms to mental health services in the south “to ensure we always provide safe and quality care to our patients” – a message reiterated in an email to staff today from SALHN CEO Professor Susan O’Neill.

“It is reassuring that Dr Brayley’s interim recommendations and conditions are largely consistent with initiatives implemented through this community reform process, but allow us another layer of assurance for our consumers, staff and wider community,” she wrote. 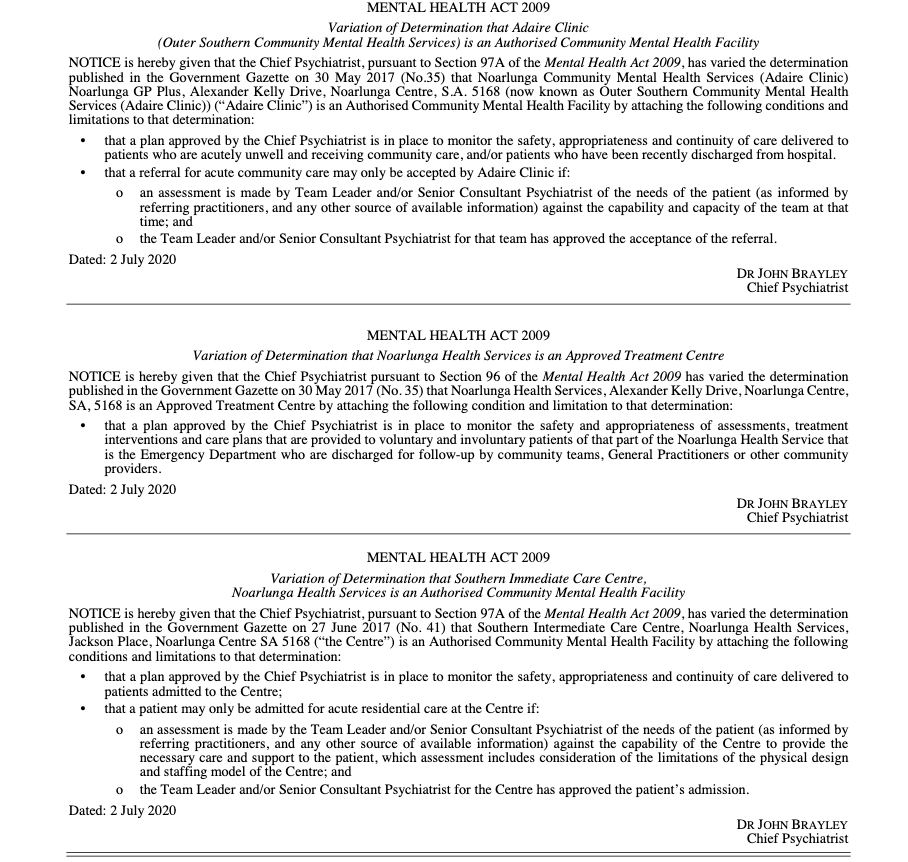 The orders published in today’s Gazette.

He said the report he has provided to Lander is preliminary because he will need to consider the response of SALHN.

A number of matters will also require additional investigation “before I can express a concluded view”.

He said his investigation, which involved help from interstate psychiatrists, had examined the care of 23 SALHN consumers, a review of statistics, and site visits – five unannounced.

“I can indicate based on the case investigations that I have identified a number of issues of concern in relation to the provision of mental health services in SALHN in the outer south in particular,” he said.

“Initially, I considered that the issues predominantly related to a period between 2016 and early 2018, however a review of two matters from 2019 suggested to me that issues could still be current.”

The temporary conditions imposed today address some of these concerns: transfer and referral of consumers into the care of community teams and the Intermediate Care Centre, and oversight of acute community care of people who are unwell.

“I am acutely aware that the public may perceive this as an indication that the Service overall is not functioning as it should, however this is not the case,” he said. “These gazettal conditions address specific issues, and knowing that these precautions are in place, people living in the outer south of Adelaide who need to seek mental care should continue to seek care from the dedicated professional staff of SALHN.

“I emphasise at the outset that my concerns are not a reflection on the dedication and skill of the staff of the outer southern service, but on clinical processes. In our review there have been many positive references to the work of individual clinical staff. The impression that I have gained from my investigation to date is that staff and clinicians across the Service in community teams, in community residential services, and in the inpatient hospital setting are providing care in the vast majority of cases with care, diligence and professionalism – albeit under pressure.”

Brayley also “acknowledged the work of the executive of SALHN in identifying and seeking to address matters of concern in the SALHN service since 2017. SALHN have implemented a new model of care for their community mental health services that commenced operating in September 2019 and should address a number of my concerns. However, I have opted to implement the gazettal conditions at this time, to provide an additional check and balance of the care delivered.”

Last week, the Chief Psychiatrist intervened in the treatment of mental health patients at the RAH, issuing an order demanding improvements within the next three months.

InDaily has previously reported on the “appalling” treatment of mental health patients after the opening of the new RAH.

In September 2018, SA Health was forced to distance itself from an email leaked to InDaily in which a SALHN mental health finance manager congratulated staff on savings made by failing to fill vacancies.