The NSW teenager, who was later released without charge, had his legs kicked out from beneath him before being handcuffed face-down on the ground, after telling a male police officer “I’ll crack you in the f***ing jaw, bro”, in vision uploaded to social media earlier this week.

It's not just the USA, it's here too.. At 5:30 this afternoon in Sydney’s Surry Hills, this is what NSW Police did to a 16yr old boy.
Police MUST be held to a higher standard. #BLM pic.twitter.com/6GZubiEFGL

NSW Police Commissioner Mick Fuller today conceded there were “other ways” the officer could have dealt with the matter, adding he likely regretted the way he arrested the teen.

“This is a case of two things – is it reasonable for someone to swear and threaten a police officer? And then, is the force the officer used reasonable?” Fuller told 2GB radio.

“I don’t know what happened before in terms of the lead-up but there was probably other ways the officer could have dealt with that matter, no doubt.

“I totally accept that officers need to show restraint.”

Perth-based barrister Edward Greaves posted an impassioned critique of the police response on his LinkedIn profile, arguing that “the only thing more disturbing than this footage… is the response of NSW Police command and the NSW Police Minister”.

NSW Police Minister David Elliott today argued Sydney “was not Minnesota”, referencing the death of George Floyd in Minneapolis on May 25 after officer Derek Chauvin – who was since charged with third-degree murder and second-degree manslaughter – knelt on his neck for almost nine minutes.

That incident sparked protests across the US, many of which have spilled over into street violence and mayhem, with the national guard firing rubber bullets and tear gas.

Elliott said he was “just as disturbed about the threat from a young person to physically assault a police officer as I was with the response from the police officer”.

But Greaves, who has previously worked as Deputy Counsel for Proceeds of Crime Litigation at the Australian Federal Police, argued “it is clear that Police were dealing with someone else [when] the young male makes a verbal threat to an officer who is standing many metres away… In short the situation was that a young bloke was talking the talk. NOBODY was in danger.

The post prompted an outraged response from Foley, who was also formerly SA’s police minister.

“Mate..this is a business site not a place to play out your moral outrage,” Foley wrote.

“It really takes a genius to try and compare an Australian Police officer undertaking their duty with the tragedy of the brutal killing of George Floyd.

“Seriously you are a dickhead!”

Foley’s post prompted a similarly strong rebuke by prominent QC David Edwardson, who was frequently at odds with the former Labor Government on various issues, with then-Premier Mike Rann intervening to reject his bid for elevation to Queen’s Counsel in 2006.

Edwardson recalled Foley’s cost-saving policy to allow prisoners to be “stacked” up to three to a cell, saying: “As a former police minister… who famously said about prisoners, ‘rack em pack em and stack em’, your response comes as no surprise.”

“For most of us, we understand that it is the rule of law which underpins the fabric of a democratic society,” Edwardson wrote. 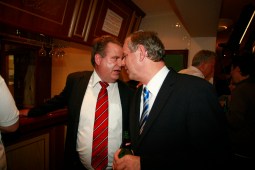 “The rule of law applies equally to police officers. This is a business site and what we are discussing here goes to the core of police business.”

Contacted by InDaily, Edwardson pointed out that Greaves’ post had in fact drawn “no parallel between [the NSW incident] and what’s happening in America”.

“It just happened to be a topic at the moment, and he was commenting how from his perspective it’s inappropriate police conduct.”

Neither Foley nor Greaves responded to inquiries about the exchange, but the former Treasurer’s post appears to have been since removed.

Foley now runs his own consultancy, and works as a strategic advisor to Singapore-based Galaxy Energy and Resources and Adelaide’s Skycity Casino.