With South Australia recording no active cases of coronavirus, the State Government says it will further focus its testing regime as part of the “suppression phase” of its pandemic response.

SA Health confirmed this afternoon there were no new COVID-19 infections recorded in SA. There are no active cases in the state – a situation first reported on Friday.

The last new case was reported on May 7.

One person remains in hospital while they recover from the effects of the virus, but are not considered an active case.

SA Pathology has now undertaken more than 80,000 tests for COVID-19.

“The next priority for active surveillance testing will be the healthcare and aged care workforce.”

He said the testing would help SA plan for every possible outcome.

“As we move into the suppression phase of our pandemic response, by providing additional opportunities for testing specific groups who either work with vulnerable populations or who may have less access to COVID-19 testing clinics, we will be able to further protect the community.” 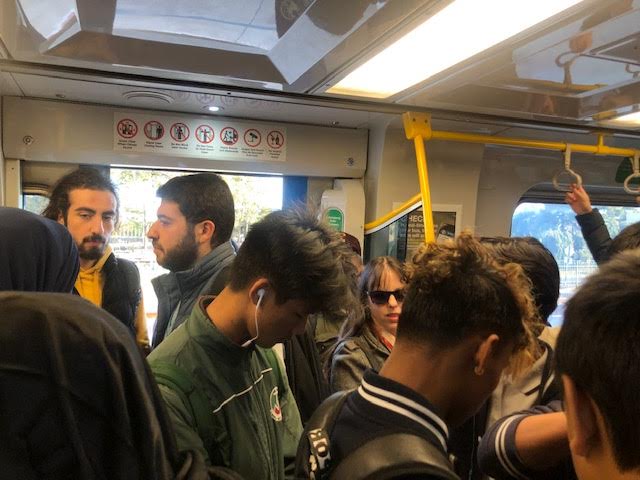 An image taken by a commuter, purportedly on the Gawler line this morning.

Images from the Gawler rail line this morning appear to show a lack of social distancing continuing, after concerns were raised last week by commuters and health authorities.

The Department of Planning, Transport and Infrastructure insists that the peak services were running at normal 15-minute intervals today, after maintenance issues last week exacerbated crowding on some services.

“Currently the health advice is to stagger your travel on public transport, travel outside of peak periods where possible and do not catch public transport if you are unwell,” he said.

“The department are also encouraging people to spread through all carriages and are making announcements on platforms reiterating the health advice.”

Labor pointed today to the real-time information published by Adelaide Metro, which appeared to show trains running at 30-minute intervals.

“Steven Marshall promised this wouldn’t be an issue this morning, he said more frequent services would be made available – however obviously failed to deliver,” said Labor transport spokesman Tom Koutsantonis.

Premier Marshall conceded “we are again concerned about some of the images and we ask people to exercise caution getting on public transport”.

He said top-level health advice on public transport use was being prepared for the national cabinet, as “we need some clarity”.

Asked whether his commitment to provide services at 15-minute intervals in peak hours had been met, the Premier said: “I think we’ve got a lot more trains on the line at the moment [but] I haven’t got the exact details… the reality is there are far more trains on our tracks in SA than there were last week.”

Australia has received international backing for an independent inquiry into coronavirus as its trade tensions with China face further strain.

A draft resolution calling for impartial, independent and comprehensive evaluation of the responses to the pandemic has been co-sponsored by 62 countries, including India, Japan, Britain, Canada, New Zealand, Indonesia, Russia and all 27 EU member states.

Foreign Minister Marise Payne says it’s crucial to review the events of earlier this year to avoid a repeat.

“There is positive support for an independent review into the pandemic to help the world learn the lessons necessary to protect global health,” Payne told The Australian.

“This is about collaborating to equip the international community to better prevent or counter the next pandemic and keep our citizens safe.”

Prime Minister Scott Morrison has previously said the push for an inquiry into the origins of the COVID-19 crisis is “completely unremarkable”.

But China’s Foreign Minister Wang Yi lashed out at foreign politicians for politicising the pandemic.

Australia’s coronavirus death toll has edged closer to 100 after a man died in NSW, while Victoria moves to clamp down on more potential outbreaks.

The man in his 60s had underlying health conditions and contracted the disease from a close personal contact, with his death bringing the national toll to 99.

NSW authorities have urged people to keep their distance from each other as social and economic restrictions are eased across the state.

McDonald’s has closed 12 outlets across Melbourne after a delivery driver tested positive to the disease.

The driver was an extended family member of a worker at Fawkner McDonald’s in the city’s north, where a cluster of 10 cases emerged earlier in the month.

A Domino’s outlet has been shut for cleaning after a worker contracted the virus, while the abattoir linked to 99 cases is beginning to reopen.

The Victorian government has announced a $2.7 billion in road and rail upgrades to kickstart the state’s economy.

Queensland has hinted its NSW border could reopen in September provided health officials give the green light.

More than 7000 people have contracted coronavirus across Australia, with 6367 already recovered.

WA is easing some coronavirus restrictions from Monday, allowing more regional travel and 20 people to dine at restaurants and cafes.

In Tasmania, 10 people will be allowed in cafes and restaurants, and at churches, weddings, auctions and libraries.

Federal Reserve Chairman Jerome Powell says a US economic recovery may stretch deep into next year and a full comeback may depend on a coronavirus vaccine.

“This economy will recover. It may take a while … It could stretch through the end of next year. We really don’t know,” Powell said in remarks aired on CBS’s Face the Nation as part of a longer pre-recorded interview to be broadcast on Sunday night on the network’s 60 Minutes news show.

“Assuming there is not a second wave of the coronavirus, I think you will see the economy recover steadily through the second half of this year. For the economy to fully recover, people will have to be fully confident and that may have to await the arrival of a vaccine.”

In separate, stark warnings, two major European leaders have bluntly told their citizens that the world needs to adapt to living with the coronavirus and cannot wait to be saved by the development of a vaccine.

Pushed hard by Italy’s regional leaders and weeks in advance of an earlier timetable, Conte is allowing restaurants, bars and beach facilities to open on Monday, the same day that church services can resume and shops reopen.

“We are facing a calculated risk, in the awareness… that the epidemiological curve could go back up,” Conte said. “We are confronting this risk, and we need to accept it, otherwise we would never be able to relaunch.”

France has reported 483 new coronavirus deaths, bringing the total to 28,108 as the country eases out of a two-month lockdown. The 483 fatalities figure compared with 96 fatalities on Saturday, and was the highest since April 23.

Spain’s daily death toll from the coronavirus has fallen below 100 for the first time in two months, the health ministry says, as some parts of the country prepare for a further loosening of lockdown measures.

The daily death toll from the COVID-19 epidemic in Italy has fallen to 145 – the lowest since March 9 – against 153 the day before, the Civil Protection Agency says.