South Australia has recorded its fourth consecutive day of no new cases of coronavirus, with the state’s total sitting at 438.

It’s the first time since early March that four consecutive days of no cases have been recorded in the state.

SA Health confirmed 411 people or 94 per cent had recovered from their infections.

Only 23 confirmed active cases remain across the state.

Four people remain in hospital, with two in a critical condition in intensive care.

“These downward trends are causing us some concern and our message is clear – whether you have an acute illness, or a chronic health condition, hospitals and GP practices are very safe places and are open for anyone seeking medical help,” he said.

“It is vital that vulnerable patients keep seeing their healthcare providers for ongoing care, especially as we enter this year’s flu season.” 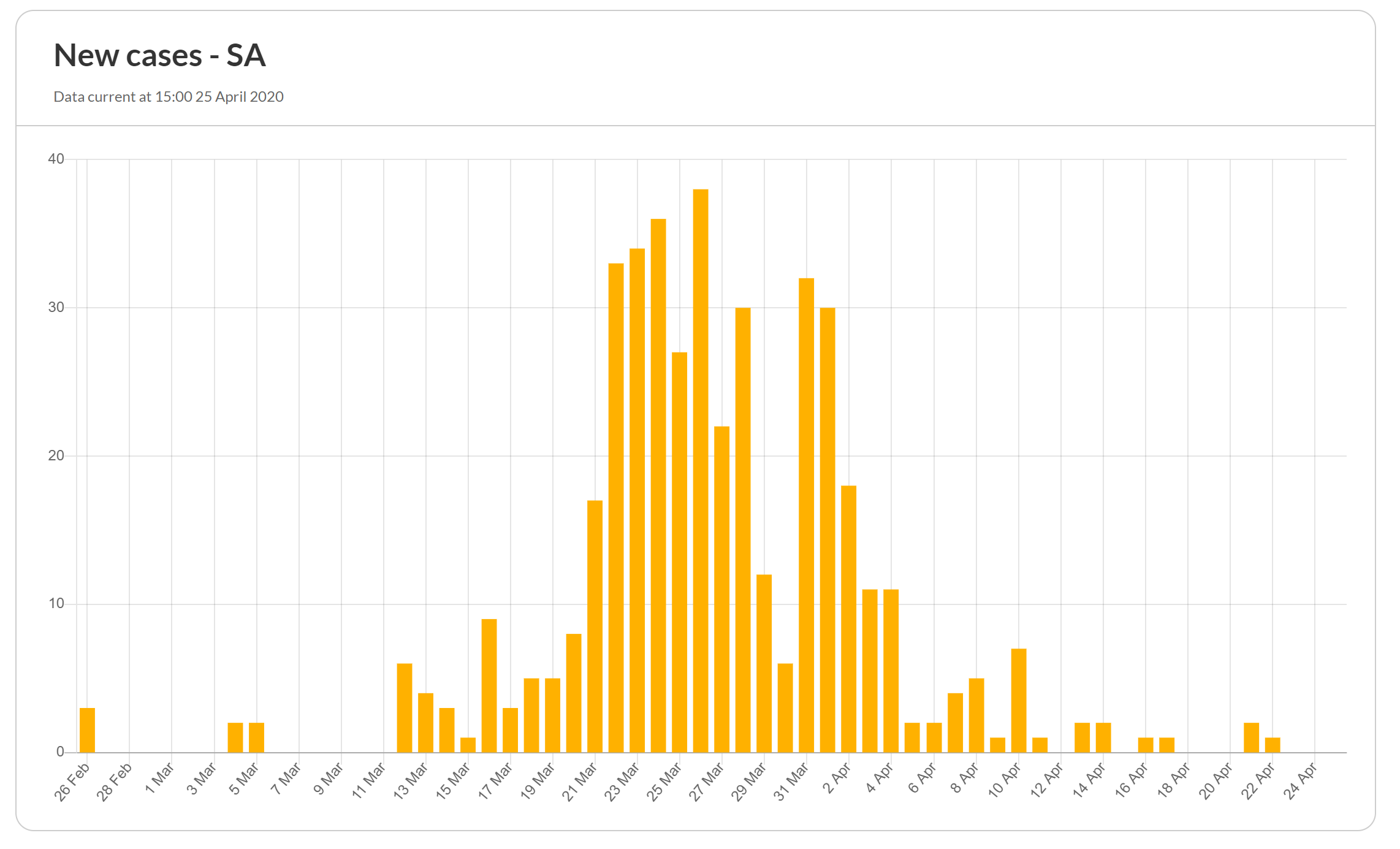 Health Minister Greg Hunt has launched the COVIDSafe tracing app today in a bid to contain the spread of the pandemic.

The app alerts users when they have been in contact with someone who tests positive for coronavirus.

Using Bluetooth, the technology exchanges a “digital handshake” when people come within 1.5metres of another user.

The information is then stored and encrypted on the person’s phone for 21 days.

The data is then deleted if the user hasn’t been in contact with a recorded positive case.

REGISTRATION – on downloading the app people will be asked for their:

* mobile phone number – so they can be contacted if needed for contact tracing.

* name – so the relevant health officials can confirm they are speaking to the right person.

* postcode – to make sure health officials from the right state and territory are dealing with the case.

COVIDSAFE IN USE – The app will record the following contact data:

* Bluetooth signal strength of other COVIDSafe users with which they come into contact.

* This will be logged every two hours in the National COVIDSafe data store.

* No location data will be collected at anytime.

* Contact data stored on a device will deleted after 21 days.

* All data stored will be deleted once the pandemic has concluded.

We’re on the ‘road back’ from virus: PM

Scott Morrison believes Australia is on the “road back” from tackling the coronavirus with some restrictions starting to lift.

The prime minister pointed to the reopening of elective surgery, schools starting to come back and says it won’t be long before some businesses are opening again.

“We are definitely on the road back now,” he told ABC radio on Sunday.

However, he said until there is a vaccine for COVID-19, social distancing will remain in place and Australians need to make hand hygiene instinctive.

It comes as Home Affairs Minister Peter Dutton said an arrangement with New Zealand is a logical first step in lifting border restrictions, and then Australia could look at other nations within the region that are enjoying the same success.

“You could look at an arrangement with New Zealand given they are at a comparable stage as we are in this fight against this virus,” he told Sky News.

Morrison and his New Zealand counterpart Jacinda Ardern discussed the issue last week, but Ms Ardern played down the idea.

“Our current border restrictions and quarantine arrangements are the most important protections we have to stop the virus re-entering New Zealand and taking off again, so they will only be lifted when we are confident it is safe to do so,” a spokesperson for Ms Ardern said.

“So while nothing is going to happen immediately, the idea has merit as something that might be possible down the track.”

Australia’s coronavirus death toll is at 80, as a plane-load of Australians and New Zealanders are due to arrive on a rescue flight out of Buenos Aires.

The more than 150 Australians and 20 New Zealanders left the Argentinian capital at 2pm Saturday local time after being stranded in South America since the outbreak.

Tasmania recorded its tenth COVID-19 fatality on Saturday after a 90-year-old man died at the Mersey Community Hospital in Latrobe.

Nine of Tasmania’s deaths have been in the northwest, where an outbreak has been responsible for the majority of the island’s 208 cases.

Twelve new cases confirmed in NSW include a worker at a Blue Mountains aged care home, prompting concerns of another outbreak.

The nation’s total confirmed cases now stands at 6694, a relatively modest increase on 6565 a week ago. At the peak of the crisis at the end of March, cases were rising by more than 200 a day.

Global deaths linked to the coronavirus has passed 200,000 while confirmed cases of the virus are expected to hit 3 million in coming days, according to a Reuters tally.

More than half of the fatalities have been reported by the United States, Spain and Italy.

The first death linked to the disease was reported on January 10 in Wuhan, China.

By comparison, there are an estimated 400,000 deaths annually from malaria, one of the world’s most deadly infectious diseases.

The United States had reported more than 52,400 deaths as of Saturday morning, while Italy, Spain and France have reported between 22,000-26,000 fatalities each.