Chief public health officer Nicola Spurrier said there were now 437 cases in SA, of which the vast majority – 376 people – had recovered.

Two men, aged 68 and 75, remain in a critical condition in Intensive Care at the Royal Adelaide Hospital.

The new cases, one in their 20s and another in their 60s, had been traced back to close contact with existing COVID-19 cases.

Spurrier said while the small jump was pleasing, “quite clearly we’re still seeing cases [and] we need to be very, very certain when we look at adjusting restrictions”.

She did, however, note it “really is safe for children to go back to school next week”, given the low levels of community transmission of COVID-19.

Her comments come as the SA Education Union launches an online campaign urging parents to keep their children home when term 2 commences next week.

Troubled airline Virgin Australia has gone into voluntary administration, after the debt-laden business was crippled by coronavirus restrictions.

Its board of directors has appointed Vaughan Strawbridge, John Greig, Sal Algeri and Richard Hughes of Deloitte as voluntary administrators of the airline and a number of its subsidiaries.

It will now try to recapitalise the business, to help it emerge “in a stronger position on the other side of the COVID-19 crisis”.

Administrators intend to sell off Virgin Australia within months and don’t plan to carve it up.

“There is an extraordinary number of parties keen to be involved,” Strawbridge said on Tuesday.

“This is a matter of months, not longer than that.”

As the hunt for a buyer rolls on, staff who still have jobs will continue to receive their wages, and eligible staff will get the government’s JobKeeper payments.

The Velocity Frequent Flyer arm, while owned by the group, is a separate company and is not in administration.

A board meeting of international shareholders on Monday night voted against providing more financial support.

The meeting came after Virgin went into a trading halt on the stock exchange last week and the federal government rejected its pleas for a $1.4 billion bailout, with Treasurer Josh Frydenberg last week saying the airline’s international shareholders had “deep pockets”.

Virgin is 90 per cent foreign-owned, with Singapore Airlines, Etihad Airways and Chinese conglomerates HNA Group and Hanshan owning 80 per cent between them, and Richard Branson’s Virgin Group holding 10 per cent.

Finance Minister Mathias Cormann said today the government wants to see two airlines remain in Australia, and  he believes administration can find a sustainable private-sector solution to the company’s future.

“The government is not in the business of owning an airline,” Cormann told ABC News Breakfast on Tuesday.

“But we do want to see two airlines continue and we believe that the opportunities (are) there out of the administration process for that to happen.”

Labor wants Prime Minister Scott Morrison to save Virgin through extending or guaranteeing lines of credit and taking an equity stake.

Shadow treasurer Jim Chalmers said having two airlines was crucial for the economy.

“The government should stop leaving 15,000 Virgin workers hanging. They need to step in and step up on behalf of those workers,” he told reporters.

A second plane load of Australians flown home from India has arrived in Adelaide to enter a two-week quarantine as part of coronavirus restrictions.

The passengers were flown from Mumbai via Indonesia and arrived early on Tuesday.

About 325 passengers were met by police, customs and SA Health officials and checked for COVID-19 symptoms.

Most passengers will be moved to the CBD’s Playford Hotel, while 20 were transferred to the Pullman at Hindmarsh Square, and another taken to the Flinders Medical Centre for observation.

On Monday, 374 people arrived on a similar flight from Chennai and were taken to 14 days quarantine at the Pullman.

Passengers from an Australian citizen evacuee flight from India arrive at an Adelaide hotel for quarantine. Photo: Tony Lewis/InDaily

There will be a “gradual restart” of elective surgical procedures, as Australia takes a tentative step towards winding back coronavirus restrictions, Prime Minister Scott Morrison said today after a morning national cabinet meeting.

Morrison said the nation was “very much in the middle of combating this terrible virus” but stressed “we are doing better than most”.

The cabinet agreed today “to lift restrictions on elective surgery after the Anzac Day weekend” but the PM said: “It will not mean an immediate return to normal… it is a gradual restart, subject to capacity.”

It will include all Category 2 procedures and selected Category 3, including IVF, post-cancer reconstructive surgeries, a range of dental operations and procedures for children under 18.

The restart, which will account for around 25 per cent of the previous surgical activity, will be reviewed on May 11, when further easing of restrictions could be considered.

Premier Steven Marshall said the ban on elective surgery in SA had been “mainly due to PPE [Personal Protective Equipment] availability”, an issue which was now “under control”.

The State Government will provide $13.8 million to support international students at South Australia’s universities, with the sector facing a potential loss of hundreds of millions of dollars.

The funding comes out of the previously announced Community and Jobs Support Fund.

The universities will distribute the funds to international students suffering hardship. It includes emergency cash grants and a one-off assistance payment for students living with South Australian families.

Restrictions under the microscope after three days without infections

For the third day in a row, South Australia recorded no new COVID-19 cases on Monday, capping off what chief public health officer Dr Nicola Spurrier called “a trifecta, perhaps”.

“This is in the context of many more tests being done,” she added, saying SA’s testing ‘blitz’ had seen almost 100 people tested on every day since Thursday, with 968 yesterday setting a new record for tests done on a Sunday in SA since the pandemic began.

“If we were getting very low numbers but our testing rate was dropping, we’d be concerned,” Spurrier said, adding authorities were now undergoing “intensive planning to see what restrictions should be lifted”.

She said this would be likely to include elective surgeries in the first instance, although a time-frame remains unclear, with Premier Steven Marshall urging caution and Spurrier noting “there may be times [in the future] when we need to put the brakes on again”.

Six people remain in hospital, with two in intensive care – a 68 year-old man and a 75 year-old man, both of whom are in a critical condition.

“Whilst we’re feeling very happy we have, again, no new cases, our thoughts go to the families of those two gentlemen,” Spurrier said.

The nation as a whole had only eight new coronavirus cases on Monday, from three states. 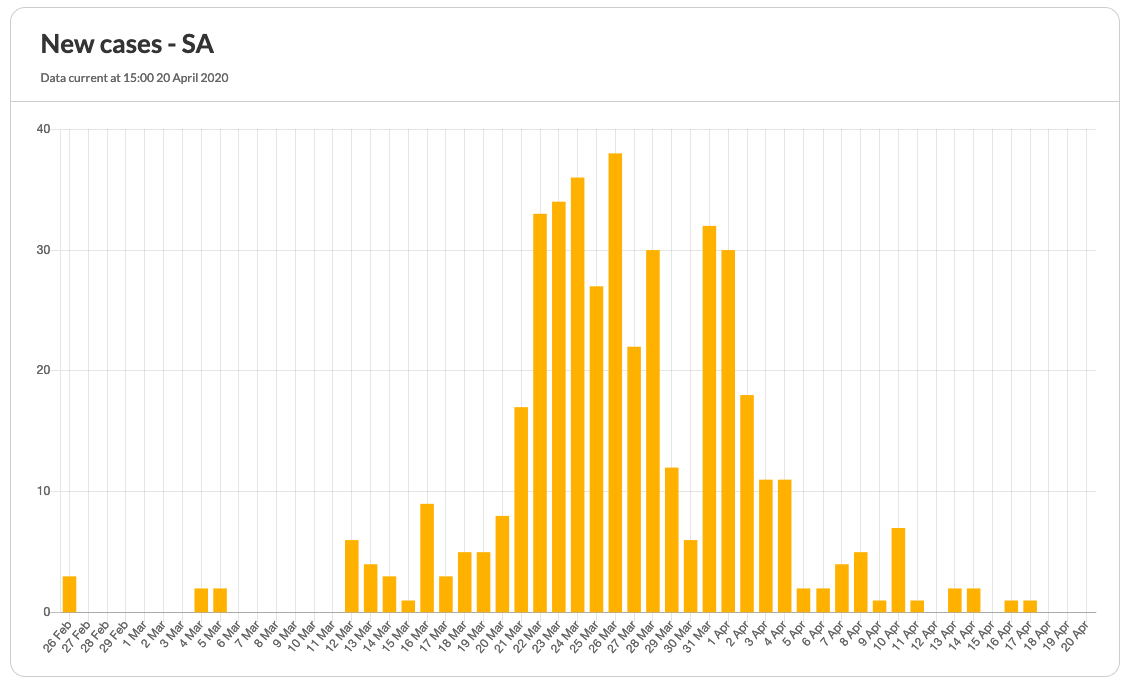 US crude oil futures collapsed below $US0 for the first time in history, amid a coronavirus-induced supply glut, ending the day at a stunning minus $US37.63 a barrel as desperate traders paid to get rid of oil.

Brent crude, the international benchmark, also slumped, but that contract was nowhere near as weak because more storage is available worldwide.

While US oil prices are trading in negative territory for the first time ever, it is unclear whether that will trickle down to consumers, who typically see lower oil prices translate into cheaper petrol at the pump.

As billions of people around the globe stay home to slow the spread of the novel coronavirus, physical demand for crude has dried up, creating a global supply glut.

US traders fled from the expiring May US oil futures contract in a frenzy on Monday with no place to put the crude, but the June WTI contract settled at a much higher level of $US20.43 a barrel.

“It normally would be good for an extra two per cent on the GDP. You’re not seeing the savings because no one is spending on the fuels,” he said.

Louise Dickson, oil markets analyst at Rystad Energy, said “it’s like trying to explain something that is unprecedented and seemingly unreal”.

WHO warns the worst is yet to come

The World Health Organisation chief has warned “the worst is yet ahead of us” in the coronavirus outbreak as many countries ease restrictive measures aimed at reducing its spread.

WHO Director-General Tedros Adhanom Ghebreyesus did not specify why he believes the outbreak that has infected some 2.5 million people and killed more than 166,000 could get worse.

He and others, however, have previously pointed to the likely future spread of the illness through Africa, where health systems are far less developed.

“Trust us. The worst is yet ahead of us,” Tedros told reporters from WHO headquarters in Geneva on Monday.

“Let’s prevent this tragedy. It’s a virus that many people still don’t understand.”

The WHO warned a large proportion of the public remains susceptible to COVID-19.

Early results from sero-epidemiologic surveys from around the world – which monitor levels of immunity within a population – suggest that a relatively small percentage of the population may have been infected, the WHO said.

“So that means that the virus can take off again,” she said.

“And so we need to ensure that the measures that are put in place (to transition out of lockdown) are done carefully.”

Some Asian and European governments have gradually eased or started relaxing lockdown measures such as quarantines, school and business closures and restrictions on public gatherings, citing a decline in the growth of COVID-19 case counts and deaths.