But gradual gains in recent weeks in a continually volatile market have seen total market capitalisations grow by $5.14 billion across the 10 companies.

Agribusiness Elders Limited has led the way with its share price almost 10 per cent higher than it was at the market peak on February 20 when its shares were valued at $8.26.

While its priced dipped as low as $7.31 on March 25, strong consumer demand for agricultural products such as beef and lamb has caused its share price to surge to $8.80 in the past four weeks. Its $8.80 share price is just one cent shy of its highest level since 2010.

As an essential service provider to the agricultural sector, Elders is not subject to any Government mandated shutdowns or border crossing restrictions.

Santos is the state’s biggest company and had more than $10 billion wiped off its value between February 20 and March 20 as the global oil price hit a two-decade low. However, the oil and gas giant has recovered more than $2.51 billion in the past month to have a market capitalisation of $8.85 billion.

The Santos share price reached $4.61 on April 9 before slipping back to $4.29 ahead of today’s opening following last Thursday’s announcement it would sell a 12.5 per cent interest in its Barossa offshore gas project, 300km north of Darwin. 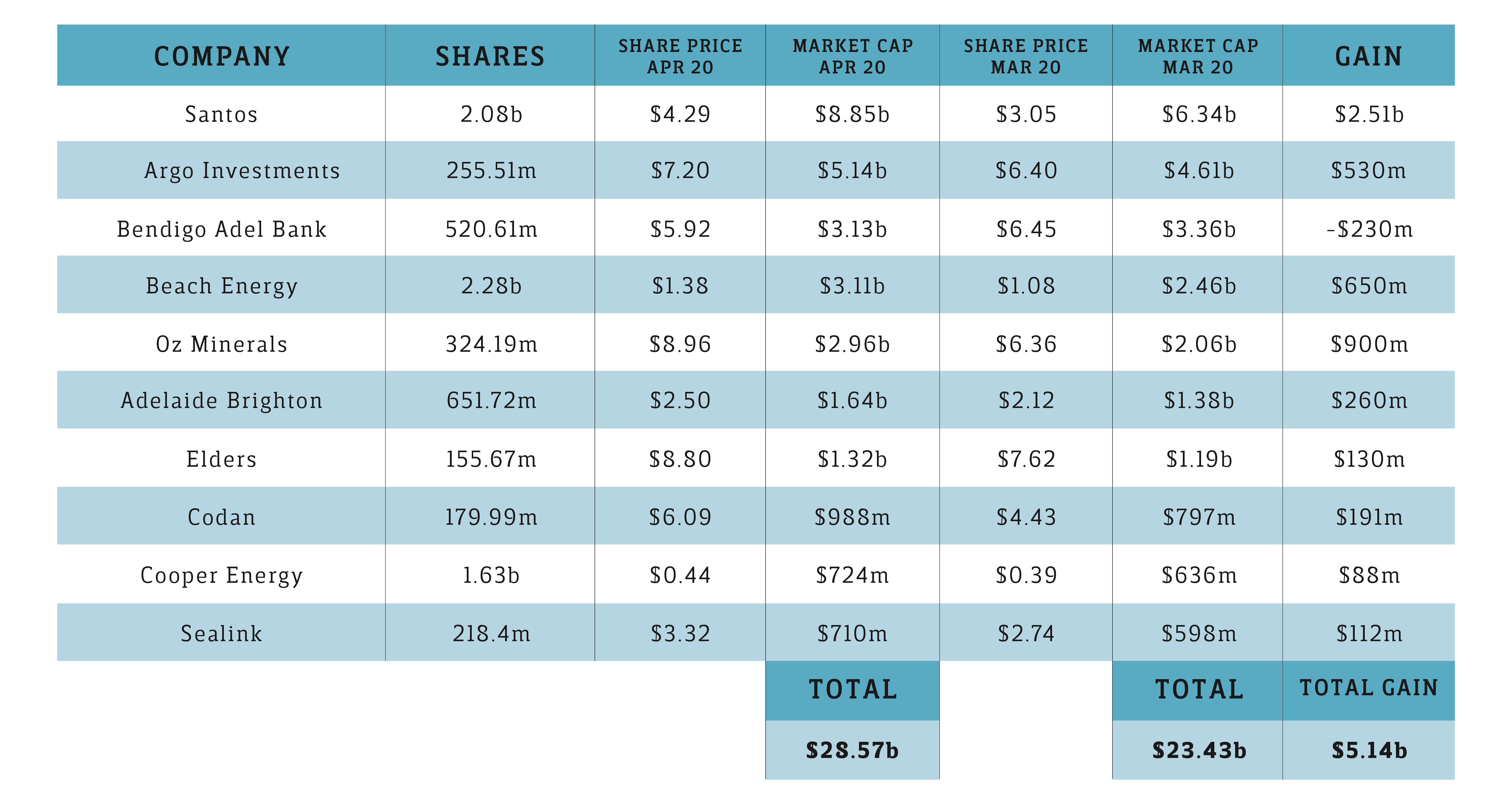 “Given the uncertain economic impact of COVID-19 combined with lower oil prices, we expect to defer FID on Barossa until business conditions improve. Barossa remains an important project for Santos due to its brownfield nature and low cost of supply, and we will continue to use this time to achieve alignment and seek to further strengthen the economics of the project,” Gallagher told the ASX on Thursday.

Overall, the ASX All Ordinaries index closed up for the week on Friday, its fourth straight week of gains.

After plunging 33 per cent between February 20 and March 20, the All Ordinaries has risen 14.2 per cent since then.

However, the 10 SA companies have fared much better in the past month, gaining 21.9 per cent. But the gains could be short lived with Australian stocks slipping this morning after an ABS survey showed nearly a quarter of Australian adults are working fewer hours due to the coronavirus pandemic.

Bendigo and Adelaide Bank was the only company in the SA top 10 list not to recover any market cap losses in the past month, losing a further $230 million from its market capitalisation since March 20. The bank’s share price fell from $10 on February 20 to $6.45 on March 20. At this morning’s open, Bendigo and Adelaide Bank shares were $5.92 with a market capitalisation of $3.13 billion.

Despite being the only top 10 listed SA company to go backwards in recent weeks, Bendigo and Adelaide Bank’s performance has been only marginally worse than that of Australia’s big four banks in the past month as the sector struggles through the crisis.

The bank’s share price fell further late last week after it announced on Thursday it was withdrawing its 2H20 financial outlook commentary due to the effects of COVID-19.

However, in its statement to the ASX it said its balance sheet remained strong and was also well positioned from a funding and liquidity perspective.

“We are open for business and as an essential service, it is vital we provide our customers with the dedicated and necessary support they need. We have been actively engaging our customers to support them during this challenging period,” Bendigo and Adelaide Bank managing director Marnie Baker told the ASX.

“We will continue to collaborate closely with the wider banking industry, government, regulators and health authorities to help manage this unprecedented situation and to protect our customers, shareholders, communities and staff.

“As Australia’s fifth biggest retail bank and one of Australia’s most trusted brands, Bendigo and Adelaide Bank is in a very strong position to support customers, staff and communities throughout this pandemic and beyond. We’re here to help them through this.”