No new cases in SA

South Australia has recorded its second consecutive day of no new cases of COVID-19, with the state’s total sitting at 435.

SA Health confirmed today that 354 people have recovered from their infections across the state or 81 per cent of all cases, leaving only 81 people with active COVID-19.

Seven people remain in hospital with one in intensive care who is in a critical condition.

There remain four cases with no known epidemiological link.

It comes after SA Pathology performed over 5,000 tests in the past three days, following the launch of a two-week testing blitz.

Dr Michael Cusack, SA deputy chief public health officer, said there had been an underrepresentation of young people getting tested.

“I would very much encourage anyone between those ages from 21 to 30 who has symptoms (such as) a sore throat, cough or a temperature to get themselves tested,” he said.

South Australians who return a negative result for COVID-19 will now be alerted by a text message to check their results online.

The fast-tracked system aims to cut waiting times and ease the anxiety for people following their tests.

However, patients who return a positive result will still be contacted directly by SA Pathology.

“We are performing in excess of 7000 tests per week, and on average, 98.7 per cent are negative results,” Dr Tom Dodd, SA Pathology’s executive director of clinical services, said.

“The process of undergoing testing for COVID-19 and waiting for the results can be stressful so it is hoped the portal will reduce delays and ease some of the anxiety for patients.” 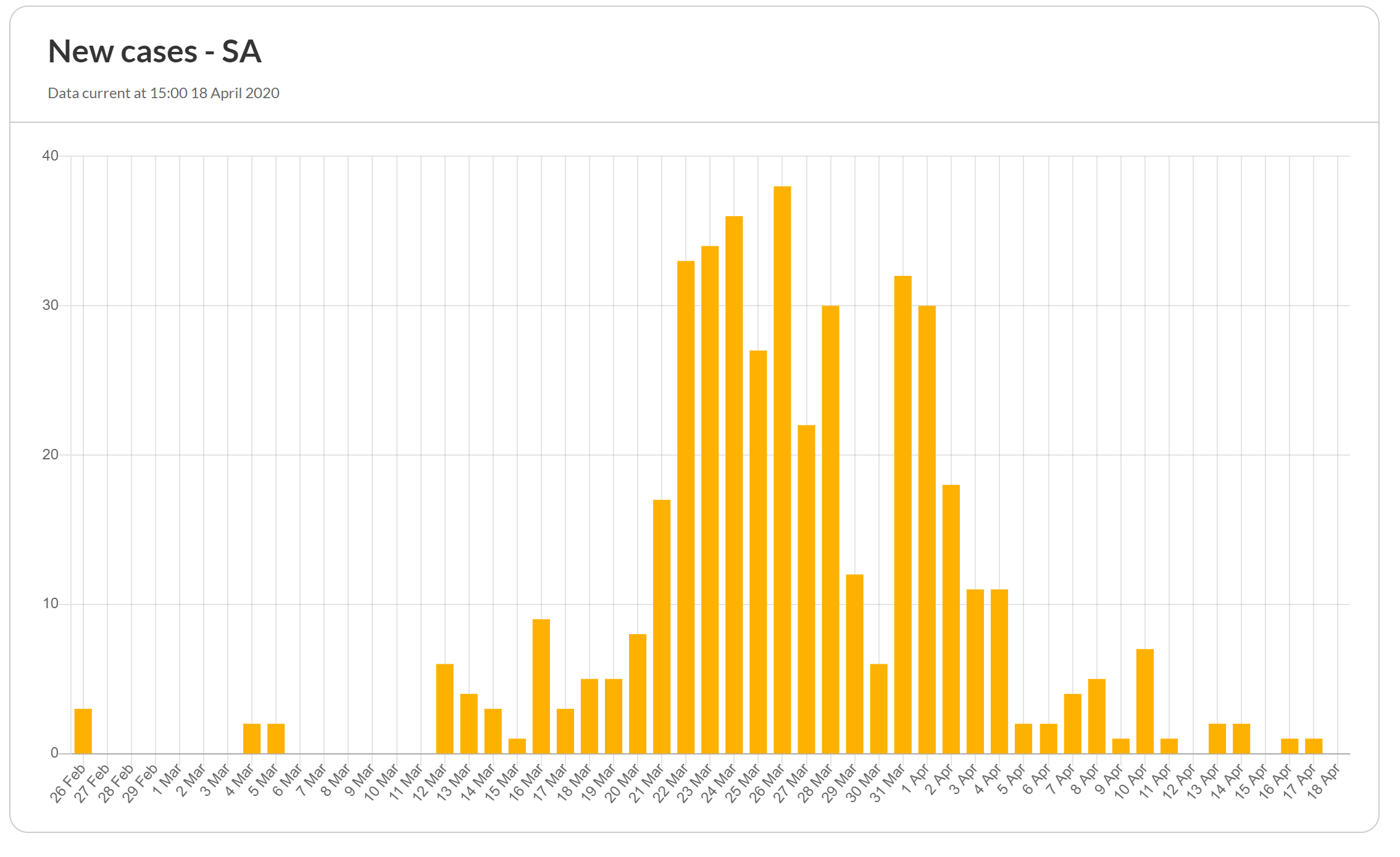 SA economy to ‘rebound faster than other states’

Premier Steven Marshall believes South Australia’s economy is set to rebound sooner than other states from the effects of COVID-19, despite economic modelling showing we’re likely to be the third hardest-hit state.

However, the Premier is predicting a tough road ahead, with the state’s unemployment rate topping the nation in the most recent figures, the local tourism industry haemorrhaging $430 million a month, and local universities facing a billion-dollar hit.

Marshall said focusing on key election promises of population growth, tourism and hi-tech industries could help get the economy back on track.

“We are looking to create a silver lining to an otherwise very dark cloud,” he told the Sunday Mail.

“As a state, we are in a good position because, compared to many other countries in the world, we still have the ability to borrow, and this will enable us to fully fund the health recovery as well as fully fund the economic recovery.”

Deloitte Access Economics predicted at the end of March that South Australia would be the third hardest-hit economy, with Gross State Product expected to decline in the latter part of the current financial year, before a sharp 6.9 per cent drop in 2020-21.

Australia’s infection rate of COVID-19 is flattening, with the rate of new cases falling below one per cent.

“The rate of increase in new cases has been below one per cent for seven consecutive days now, and that is an important national achievement,” federal Health Minister Greg Hunt said today.

“What it means is we now have a sustained and genuine flattening of the curve.”

But he warned the was more work to be done to maintain that position.

The national total of deaths is 70.

SA Police have issued fines to a group of young drivers on Friday for breaching COVID-19 restrictions.

Police said a group of around 100 people attended the private meet-up in Penfield just after 10pm.

Eighteen people were issued with expiation notices for breaching crowd gathering directions, while five were handed fines for traffic offences.

Coronavirus not an old person’s disease

The federal government will be able to allocate more protective face masks to healthcare workers after receiving an earlier than expected shipment of 58 million masks.

The positive news comes even as deputy Chief Medical Officer Paul Kelly warned Australians that COVID-19 is not an old person’s disease.

It comes as the federal government has now received 58 million protective face masks.

Earlier, Mr Kelly said the death of a man in his 40s shows COVID-19 is not an old person’s disease.

The man was a crew member of the Artania cruise ship, which was finally leaving Fremantle, Western Australian waters on Saturday on its way to the Philippines.

“So that is by far our youngest person that has died in Australia from this disease and a terrible tragedy for that man and his family,” he said.

“But it is a reminder for us that this is not just an old person’s disease.”

Flu vaccine manufacturing is being ramped up this season in the hope higher public immunity to influenza will free up hospitals to focus on coronavirus.

Melbourne manufacturer Seqirus has partnered with the federal government to make an additional two million influenza vaccines for the 2020 flu season, with nine million vaccines in total to be distributed across the country.

The company says there is already strong early demand for flu vaccines.

“This is a positive trend, because we know that flu vaccination programs will be more important than ever due to the COVID-19 pandemic,” Seqirus executive director Danielle Dowell said.

The additional vaccines will be available through GP clinics, pharmacies and immunisation providers.

Latest on COVID-19 from around the world

The coronavirus pandemic has infected more than 2.2 million people worldwide and more than 150,000 deaths have been recorded.

The daily increase in coronavirus deaths in the state of New York has dropped under 550 for the first time in over two weeks as hospital admissions continue to decline.

However, governor Andrew Cuomo warned the crisis is far from over. Hospitals are still reporting nearly 2000 new COVID-19 patients per day.

The state logged 540 deaths on Friday from the virus, the lowest number since April 1.

Nearly 13,000 New Yorkers have died since the state’s first coronavirus case was reported on March 1.

Prime Minister Justin Trudeau said the US and Canada have agreed to keep their border closed to non-essential travel for another 30 days.

Spain has reached 20,000 deaths for the coronavirus pandemic, and total infections have increased to more than 190,000.

Spain’s health authorities reported 565 deaths in the last 24 hours. Only the US and Italy have more deaths.

New infections rose by nearly 4500. More than 74,000 people in Spain have recovered.

Strict confinement rules are expected to be extended beyond April 26.

French authorities have barred a cruise ship that has been at sea since early January from allowing more than 1000 passengers to disembark before its final destination in Italy.

The French administration said that the Costa Deliziosa sought to make a stop in Marseille on Friday to let off 1400 passengers who wanted to get out before the final stop in Venice.

The administration granted exemptions to six other cruise ships in recent weeks to allow French passengers to get off, but refused this time.