A second South Australian has died from COVID-19.

SA Health said that a 62-year-old woman from metropolitan Adelaide died this morning from the virus at the Royal Adelaide Hospital.

“The woman acquired COVID-19 from the Ruby Princess cruise ship,” the department said.

Premier Steven Marshall said today there was no doubt the virus would take more lives.

“That’s why we have to put restrictions in place,” he said.

“They will unequivocably save lives.”

Chief public health officer Nicola Spurrier said the woman would have booked her cruise without any knowledge of coronavirus.

Spurrier said it was tragic that despite receiving world-class intensive care treatment the woman could not be saved.

“As I understand it she did have some very mild health problems but that would be the same as most other 62-year-olds in our society,” she said.

“So this is a virus that doesn’t discriminate.”

The premier said he had passed along a hand-written note to the woman’s family but was otherwise respecting their privacy.

One of the new cases is believed to be due to community transmission.

Of the confirmed cases, 120 have now recovered. Seven people remain in Intensive Care, with five in a critical condition.

There are now 33 cases linked to an outbreak at Adelaide Airport, of which 18 are baggage handlers and 15 are secondary contacts. 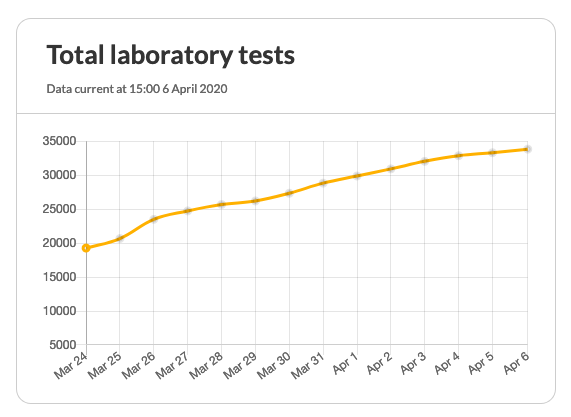 Australians have been urged to stay home with their immediate families over Easter to restrict the spread of coronavirus.

The daily increase in new cases has dropped to about three per cent, but health experts are concerned COVID-19 could be widely transmitted among unwitting community members.

Federal parliament will meet briefly on Wednesday to pass a $130 billion wage subsidy scheme, which will see eligible workers paid $1500 a fortnight.

Labor is concerned more than one million casual workers are being denied access to the JobKeeper program, but will approve the spending regardless.

The scheme is designed to save six million jobs.

More than 500 people have been infected with coronavirus by someone in the community who didn’t know they had it.

Nearly 6000 Australians have caught the coronavirus and 50 have died.

The government continues to work on the basis that the tough restrictions and economic support for businesses suffering under them will only need to be in place for six months.

South Australia’s Department for Environment and Water has confirmed that no camping will be allowed on crown land, nor in any SA parks and reserves, “for the foreseeable future”.

With governments across Australia discouraging people from travelling at Easter, the department said the ban was in place to protect the community’s health.

“The State Government is actively discouraging all unnecessary travel across South Australia in an effort to limit the spread of COVID-19 and is asking people to cancel or reschedule any trips or holidays to regional communities this Easter,” said department executive director Mike Williams.

“Therefore it is not appropriate for people to be camping, or congregating in groups and possibly sharing facilities on unalienated, or vacant Crown Land. Authorised officers will be directing anyone doing this to leave.”

Panic buying is causing a shortage of grocery supplies in remote indigenous communities, forcing many vulnerable Aboriginal and Torres Strait Islander people to travel long distances to shop, exposing them to the spread of COVID-19.

Bate said store managers in remote indigenous communities were receiving as little as 40 per cent of their orders as suppliers met increased demand from big retailers.

The Mai Wiru stores, often the only place for hundreds of kilometres where indigenous people can shop, are struggling to secure basic items, including toilet paper and baby formula.

“They can’t simply get in a car and drive to the next supermarket, and the consequential effects on these already vulnerable communities could be disastrous,” Bate said.

Central Land Council, which covers more than 750,000 square kilometres in the southern half of the Northern Territory, says governments must act or residents will continue to defy orders and travel to regional towns for supplies.

Reducing the cost of fresh fruit and vegetables would be an incentive to stay home, King said.

The death toll in the US coronavirus hot spot of New York City has passed 3200 as in the UK Prime Minister Boris Johnson lay in intensive care.

The twin developments came even as the crisis seemed to be easing or at least stabilising, by some measures, in New York state and parts of Europe, although health officials warned people at nearly every turn not to let their guard down.

After 76 days, China finally lifted the lockdown on Wuhan, the city of 11 million where the outbreak was first recorded.

But in an encouraging sign, the governor said hospital admissions and the number of those receiving breathing tubes are dropping, indicating that measures taken to force people to keep their distance from one another are succeeding.

And alarming as the one-day increase in deaths might sound, the governor said that’s a “lagging indicator,” reflecting people who had been hospitalised before this week. Over the past several days, in fact, the number of deaths in New York appeared to be levelling off.

In London, the 55-year-old Johnson was in stable condition and conscious at a hospital, where he was receiving oxygen but was not on a ventilator, officials said.

Foreign Secretary Dominic Raab was designated to run the country in the meantime.

“For all of us in cabinet, he is not just our boss. He’s also a colleague and he’s also our friend,” Raab said. “And I’m confident he’ll pull through because if there’s one thing I know about this prime minister, he’s a fighter.”

Deaths in Britain reached nearly 6200, after a one-day increase of almost 800.