Regional newspapers interstate and overseas have been shutting down over the past weeks and, today,  The Bunyip – first published in 1863 – announced it would close “indefinitely” due to losses caused by the pandemic.

The Gawler-based newspaper, owned by the Taylor Group which has five newspapers in regional SA, had employed 12 people, including journalists, salespeople and administration staff, who have been stood down.

Taylor Group managing director Ben Taylor told readers in a front page editorial that the decision had been “agonising”, but the Federal Government’s JobKeeper wage subsidy wasn’t enough to keep the newspaper going.

“Regional newspapers through Country Press SA and also our national association Country Press Association, have been lobbying governments for many years to support our industry,” Taylor wrote.

“This has fallen on deaf ears as governments continue to shift their ad spend to online platforms.”

The titles include the Messenger Newspapers in South Australia, which will continue to publish online content.

Taylor told InDaily today that he hoped to re-open The Bunyip once the coronavirus crisis had passed.

However, he said country newspapers had been facing tough times even before the pandemic hit.

“It was the final straw,” he said.

“We have been struggling on with that paper.

“I had to do something sooner rather than later. Even with the JobKeeper allowance (federal government wage subsidies announced this week), I just couldn’t keep it going back a few grand each week, waiting for that to come.

“JobKeeper does give me hope that I can re-open. But no-one knows the future – it’s a week by week proposition.” 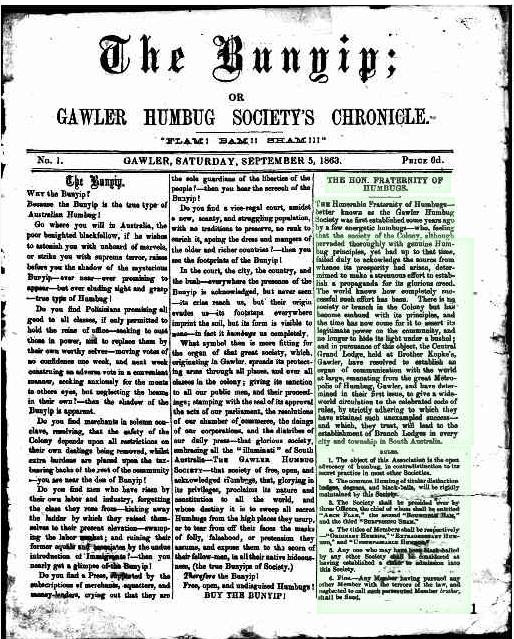 The first edition of The Bunyip, published in September 1863.

Regional publishers have been lobbying the Federal Government to release an estimated $40 million which has been sitting – unallocated – in the Regional Small Publishers Innovation Fund, to help newspapers continue to operate through the pandemic.

The fund was part of a deal negotiated by then South Australian Senator Nick Xenophon in 2017 in return for his support for the Federal Government’s media reform package.

The reforms primarily benefited Australia’s biggest media companies, by removing regulation, including the “two out of three” rule, which prevented a media company from controlling more than two out of three platforms – commercial TV, commercial radio and newspaper – in any licensed market.

However, very little of the regional and small publishers fund was ever allocated.

Ben Taylor says those funds should have been quickly re-allocated to a regional newspaper “survival fund”, with a simplified application process.

For the time being, it’s all too late for The Bunyip, which, in a bitter twist, Taylor’s company took over on this day in 2003.

Country newspapers interstate have been closing over the past few weeks, including Mildura’s daily paper, the Sunraysia Daily, and the more than century-old Barrier Daily Truth in Broken Hill.

News Corp’s decision to suspend its community print products was not taken lightly, according to the company’s Australasia executive chairman Michael Miller.

“The suspension of our community print editions has been forced on us by the rapid decline in advertising revenues following the restrictions placed on real estate auctions and home inspections, the forced closure of event venues and dine-in restaurants in the wake of the coronavirus emergency,’ he said.