Bushfires blackened half of the popular tourist destination in early January, claiming two lives and 89 homes, but some residents have said the clean-up has barely begun.

Islander Estate co-owner Yale Norris lost his 280-hectare farm including his house, shearing shed, equipment, office and much of the vineyard.

“And I lost a lot of hope on that night as well,” he said.

As his vines and the surrounding landscape show signs of growth, he is eager to see his property cleaned up so he can start rebuilding.

The asbestos-ridden debris of his house still lies at the entrance to his winery.

“We’ve just been driving past this pile of asbestos rubble for the past seven weeks, which is kind of disheartening,” he told ABC News.

“It knocks your psyche down a little bit and it puts you in a mood where you think it’s never going to end.

“It’s important for your mental health to see signs of progress.

“A fair few people are digging pits in the back of their property and just pushing things into a hole because they’re fed up with waiting.” 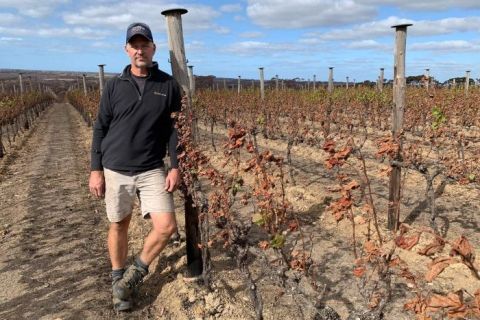 After much confusion, the State Government has agreed to pay the clean-up costs for bushfire-affected residents in the Adelaide Hills and Kangaroo Island.

But owners of burnt-out properties said they still had no idea when help will arrive.

“I think the Government dug their heels for a long time … it took nearly five weeks for them to decide to help,” Mr Norris said.

“This should have happened straight away and it’s disgraceful that it hasn’t.”

Kathy Barrett was the first local to lose infrastructure on Kangaroo Island when the fire started in December.

Her house was spared but she lost the farm workshop, vehicles, machinery and several sheds — yet she still has no idea when the site will be cleared of debris, glass and nails. 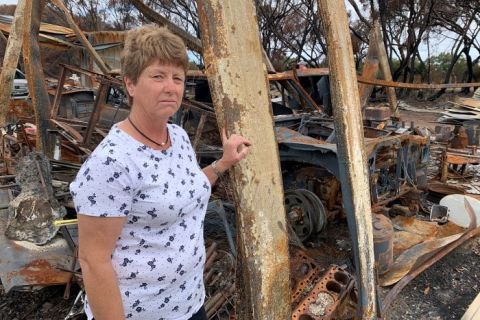 Kathy Barrett is still waiting for her property to be cleaned up. Photo: Claire Campbell/ABC News

She and her husband have ordered new sheds, but they cannot build them until the site has been cleared — a process she fears could still be months away.

“It’s actually frustration, I’m sick of looking at it … we want to be able to move forward — we’ve got other things we need to do,” she said.

“We didn’t want to dig a hole and bury it in … but I think there’s so much there that could be recycled and I think, environmentally, we need to deal with our waste properly.

“We’ve put ourselves on a lot of lists to get the help that we’re told is coming to us and the information from those people is not flowing back down to us.

“I would have thought that there was a disaster plan and step-by-step process of what you need to do.”

Vaughan Levitzke, the chief executive of State Government agency Green Industries SA, said five of 170 properties had been cleaned up on Kangaroo Island.

But he said he hoped another 28 properties would be cleared within the next two weeks.

“We’ve been focusing on the key areas that are either ecologically important or have a high risk to the public in terms of asbestos,” he said.

“It’s probably going to be around three months to get through the whole lot and if we can possibly speed that up, we will.

“We’ve been so focused on the task I think the risk is we forget to tell people where we’re at.” 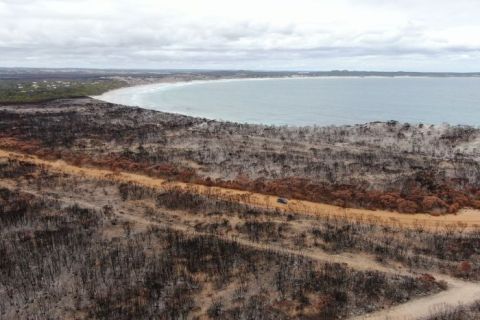 finding asbestos-ridden properties that had not been on the Department of Human Services’ list.

He said his staff had been “flat-out” but conceded more resources were needed.

He said clean-up priority was going to asbestos removal, businesses affected and people who had lost their house.

“People will unfortunately have to be a little bit patient as this isn’t the only fire ground we’re cleaning up,” he said.

“We can always do with more [resources], and we’ve advertised also on the island and here to try and find anyone else who’s licensed to be able to deal with asbestos … that we can contract.”

While the clean-up process has been slow for those directly affected by the deadly bushfire, the island’s tourism operators have now reopened nearly all attractions.

But visitors have been slow to return, and many operators have taken a further hit with Chinese tourists cancelling due to the coronavirus travel ban.

The area is now safe to visit but business has plummeted about 80 per cent in what is usually the busiest time of year. 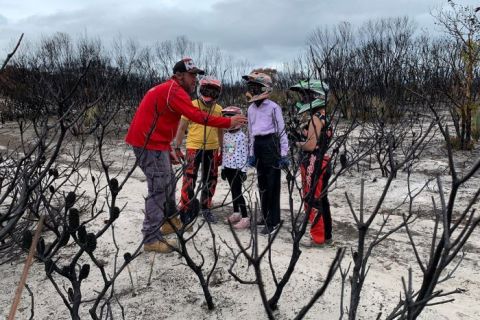 Tour guide Sam Florance said they had to lay off staff.

“At this time of year, we’d normally still have 10 cars in the car park, four guides doing quad bike tours here — today we’ve had one,” he said.

“We had to send at least four guides off the island because there’s just not enough work for them, and even the guides we’ve got now — they’re getting very limited hours as well.

“We can’t give them any money when we’re not making any money either.

Desperate to entice visitors back to his island home, Mr Florance is trying to turn adversity into opportunity, running tours through the burnt

landscape and showing groups the resilience of the Australian bush.

“Bushfires are a massive part of Australia, we need this to happen … the only problem is we don’t want people’s livelihoods to get stuck in the way of it,” he said.

“The island is still beautiful, it’s a little bit black, but we’re still here, we’re 100 per cent ready for action and it is magnificent.”

Waves and Wildlife Cottages owner Paul Stanton believes the “Book Them Out” campaign is working.

Mr Stanton lost his family home and is now living in one of his cabins overlooking Stokes Bay, along with several other bushfire-affected families. 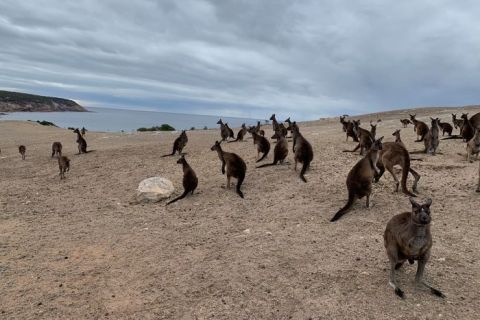 But he is now welcoming back visitors to the other available cabins and has been touched by their generosity and support.

“Everyone cancelled basically — not only were we getting calls about cancelling, we cancelled everyone for January,” he said.

“We’re getting stacks of enquiries now and we’re having to say no to most of them, so I think the campaign is definitely working.

“Thank you so much to Australia for helping people who have been through this disaster.

“It is wonderful and I think that is encouragement for everyone to get their feet back on the ground and move forward.”