One of them, a 31-year-old man formerly of Adelaide, was arrested at a library in Sydney’s Green Square yesterday, while the other two, a 32-year-old man and a 28-year-old woman, were arrested in the Adelaide suburb of Seaton last night.

New South Wales police said more than 80 personal and financial profiles were stolen for the purpose of committing fraud.

They said the 31-year-old committed the crimes in South Australia from early 2019, and then in NSW from August 2019.

He will face 24 fraud-related charges in Newtown Local Court today.

The two Seaton residents will appear in the Adelaide Magistrates Court today charged with money laundering and deception offences.

Searches were conducted in the Adelaide suburbs of Brompton, Somerton Park and Seaton, and in Sydney’s Newtown and Erskineville. 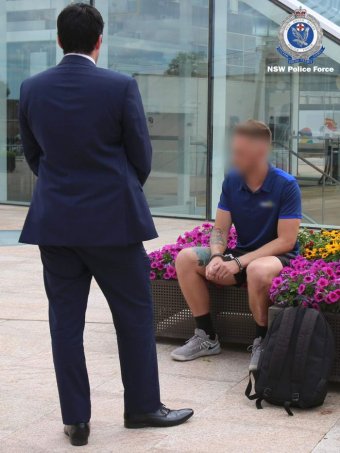 The 31-year-old man after being arrested at the library. Photo: NSW Police Force

“Cybercrime and this investigation in particular presented unique challenges for law enforcement who were able to tackle this issue collaboratively with law enforcement and industry partners,” he said.

“This investigation is an excellent example of police working together to ensure that cybercrimes which are committed across our state and territory borders will be thoroughly investigated by law enforcement.”

“Identity information is a valuable commodity on the black market and dark web, and anyone who stores this data needs to ensure it is protected,” Superintendent Craft said.