According to the documents, released under Freedom of Information laws, McGowan organised a meeting with the major healthcare company Silver Chain Group and consultancy firm Deloitte by text message – but a decision was then made not to proceed with that meeting, citing probity concerns, in early July last year.

Last week, InDaily revealed that McGowan had been registered as the sole director of Silver Chain Corporate Services, a Silver Chain Group subsidiary, during the first two months of his public appointment – between May 7 and July 16, 2018.

The parent company had begun work on a $13 million contract for SA Health during the same period.

McGowan referred the matter to the Commissioner for Public Sector Employment for investigation after InDaily made enquiries on the subject, but stressed that he had not received any money from the subsidiary during the early months of his tenure as SA Health CEO, and that he had no part in negotiations over the parent company’s taxpayer-funded contract.

A department spokesperson said an administrative error by Silver Chain had led to a delay in changing officeholder details on a non-operational, dormant subsidiary company of Silver Chain.

But new documents suggest that something else happened between early May and mid July 2018: McGowan agreed, by text message, to a meeting concerning “potential partnerships with Silverchain (sic) and SA Health”.

His office later cancelled the meeting on the SA Health CEO’s behalf, “as it could be perceived as a probity issue”.

In an email, dated July 5, 2018, a Deloitte staff member writes to McGowan’s office, noting that the chief executive had agreed to a one-hour meeting about the potential “partnerships”. 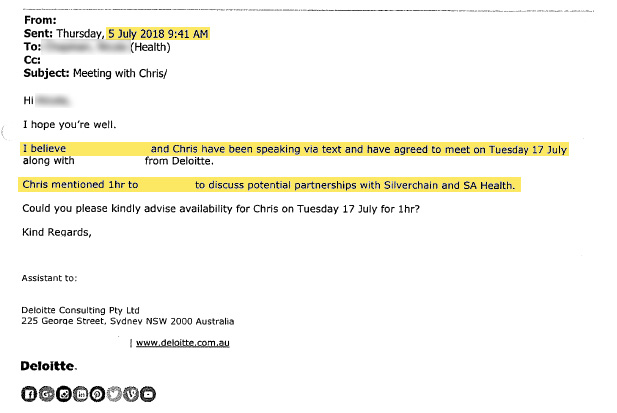 In an emailed reply, sent that same morning, McGowan’s principal executive officer does not dispute that the text exchange occurred – but says that such a meeting would not be appropriate. 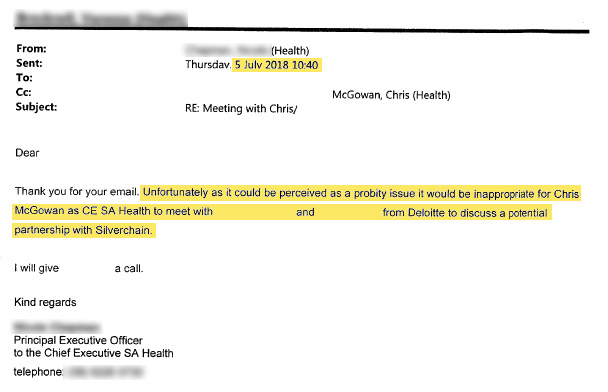 The Freedom of Information documents – released in partially redacted form by SA Health to the Opposition, and provided to InDaily – also appear to show McGowan was receiving information about hospitals policy from Silver Chain employees well into his tenure as SA Health CEO.

An SA Health spokesperson told InDaily today that McGowan “is fully aware of his probity requirements within the public sector”.

“To ensure transparency and in an abundance of caution, Dr McGowan has provided the documents to the Commissioner for Public Sector Employment for review,” the spokesperson said in a statement.

The spokesperson said all of the documents from the Freedom of Information request have been sent to the Commissioner, Erma Ranieri.

The Commissioner last week handed control of her inquiry into McGowan to an independent investigator after questions were raised in parliament about her role in the process that elevated him to the top job in SA Health.

McGowan had been CEO of Silver Chain Group for a decade before he was appointed to the department.

Early last year, while he was the company’s CEO, McGowan asked Silver Chain research officer Ching Wong to dig up hospital admissions data on his behalf, the documents say. 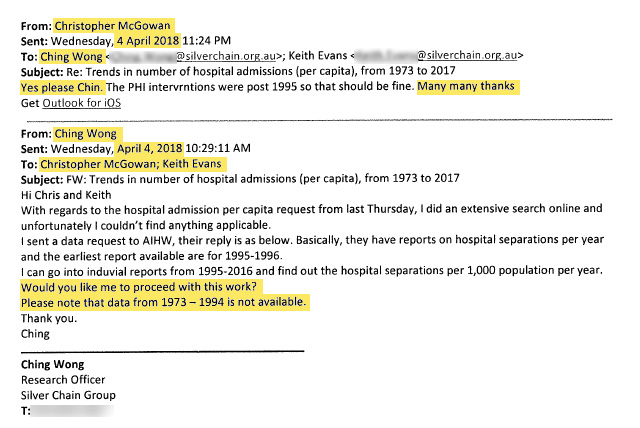 On May 21, 2018, two weeks after his public appointment as SA Health CEO, the same Silver Chain staff member provided him with that data.

The email features a series of reference articles, building the case that a large proportion of hospital admissions are avoidable.

McGowan forwards the email from his private account to his official SA Health email account a few days later.

InDaily asked Silver Chain Group whether the emails had the potential to influence the CEO on matters of public policy, and whether the communications were appropriate, given McGowan’s role.

A spokesperson for the company said: “Given the matter has been referred to the Commissioner for Public Sector Employment, it would not be appropriate for Silver Chain to provide further comment.”