It comes after a review tabled in Parliament yesterday recommended that the State Government enshrine Commissioner April Lawrie’s role in the Children and Young People (Oversight and Advocacy Bodies) Act “to make a major impact” on alleviating Aboriginal disadvantage.

Lawrie was announced as the inaugural Aboriginal Children’s Commissioner in October last year in the wake of the Nyland Royal Commission into South Australia’s child protection systems, where Aboriginal children remain grossly overrepresented.

But InDaily reported in November last year that Gardner had binned that move and had instead “fast-tracked” Lawrie’s appointment through a clause in the Constitution Act, meaning her role was not set out in legislation.

I don’t have powers, I’ve only got functions

One year later, Lawrie is still without defined legislated powers, meaning she is unable to conduct inquiries or formal investigations into issues brought to her office’s attention.

“The fact that this has taken a long time has been out of my control,” Lawrie told InDaily this morning.

“I don’t have powers, I’ve only got functions.”

In the paper, Dennis argued that there should be “statutory recognition of the office of the Commissioner for Aboriginal Children and Young People” to affect “major reform”.

“The provisions for independence, and for the appointment and tenure of this Commissioner, should be the same as those applying to the Commissioner for Children and Young People,” he wrote.

“It is essential that Aboriginal and Torres Strait people feel that they are being represented by, and are having their interests protected by, a trusted person who understands their culture.”

In response, Gardner told InDaily he would “prioritise” enshrining the role of the Aboriginal Children’s Commissioner in the Act.

“My intention is to incorporate stakeholder feedback into the preparation of a Bill that may be introduced into Parliament next year,” he said.

But Lawrie said a Bill should be introduced sooner to allow her to “bring about the true change that our Aboriginal children and young people deserve”.

“What I’d like is the power to actually bring about a motion of inquiry, to really dive deep into pressing systemic issues,” she said.

“It would mean I could perform the role with a level of authority where an inquiry can be formed with investigative research to truly understand the experiences of Aboriginal children and their families.”

Among the issues identified by Lawrie as needing formal investigation is the Department for Child Protection’s adherence to the Aboriginal child placement principle, which prioritises the placement of Indigenous children in care within their family or cultural group.

Latest figures provided by the Department to InDaily shows the number of Aboriginal children in South Australia who are fostered by members of their extended family or community has slightly risen from 62.5 per cent (711 children) in June 2017 to 63.4 per cent (850 children) in June this year.

However, this year’s figure is markedly lower than what was recorded 10 years ago, when 74.4 per cent of Aboriginal children were placed with members of their extended family or community.

“The fact is we’ve got over 150 Aboriginal kids in non-Aboriginal care,” Lawrie said.

“I’ve heard on a number of occasions from the sector that there aren’t enough carers.

“I want to test if that’s a myth because if you really have an understanding about how you engage Aboriginal families and community in terms of Aboriginal children, we have concepts of large extended families.

“I find it very hard to understand how agencies in the sector can go on record that they can’t find families for our Aboriginal children who do need to be removed.”

Lawrie said she would also like to investigate the extent to which Aboriginal babies are removed from their mothers at birthing units and antenatal services. 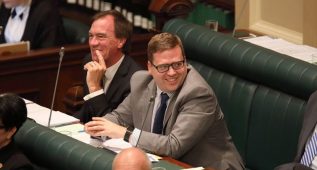 “The health system says it doesn’t remove kids but it certainly does,” she said.

“The cruellest thing to do is to remove a child from its mother, particularly in the perinatal stages, because all the experts will say you do more harm than good, so it’s worth supporting the mother with her newborn baby.”

Other issues flagged by Lawrie for formal investigation were the overrepresentation of Aboriginal children in youth detention and the education gap between Aboriginal and non-Aboriginal students.

Gardner said the recommendations made by Dennis “speak for themselves”.

“We welcome comments from any interested stakeholders on the recommendations in that report,” he said.