The second South Australian consultation meeting for the new, 10 year Closing the Gap framework, held this week in Port Lincoln, heard government services and housing were issues of concern for Indigenous communities.

“They were just talking about how particularly young people are homeless… and a lot of the old people are still living in some very low condition homes that haven’t been furnished,” said Ruth Miller, lead convener of the South Australia Aboriginal Community Controlled Organisations Network.

“Port Lincoln is really quite poor and even though it’s got the most millionaires per capita, Aboriginal people are still living in third world conditions,” she said.

“One of the other issues that came out yesterday was the debit welfare card; they’re really unhappy with that as they feel that their position of making choices in their lives has, once again, been taken away.

“There’s a whole lot of [government] services in Port Lincoln which they mentioned they don’t get treated [as well] as the mainstream do.”

In December last year COAG (Council of Australian Governments) agreed to work with Aboriginal and Torres Strait Islanders on the refreshed Closing the Gap strategy through the Coalition of Peaks – a group of 40 Indigenous community-controlled organisations engaging with First Nations across Australia.

They are asking communities about issues of concern, and their thoughts on the draft Closing the Gap goals.

They will form the Commonwealth’s focus for helping Aboriginal and Torres Strait Islander Australian communities for the next decade.

Miller said that the first, held in Ceduna, revealed that mental health was of great concern.

“There’s a lot of drug and alcohol involved here and I think anxiety is common,” she said.

“Health and specifically mental health came up in our discussion… [and] housing, education, employment.

“Because we haven’t reached some of the targets, Aboriginal people and Torres Strait Islander people are still suffering, are still disadvantaged, their life expectancy is still a bit far apart.

“The housing situation, the employment situation – nothing has changed.”

The seven original Closing the Gap targets in bold

In 2016 the Australian Institute of Health and Welfare revealed more than 25 per cent of Indigenous Australians used an illicit drug in the last 12 months – almost two times higher than non-Indigenous Australians – and tobacco, alcohol and other drugs are key risk factors contributing to the health gap between these groups.

The Coalition of Peaks have fought for their voice to be heard since the first Closing the Gap agenda was rolled-out in 2008.

Miller said the last strategy failed for a myriad of reasons, but predominantly cited a lack of Aboriginal and Torres Strait Islander Australian input.

“There’s a lot of issues around why: a lack of consultation, a lack of Aboriginal community contribution,” she said.

“We weren’t involved as Aboriginal and Torres Strait Islander people… in what were the targets [but] this time around, we’re looking at having the Aboriginal community controlled organisations involved.”

COAG said in a statement in order to effect real change, governments must collaborate “in genuine, formal partnership with Aboriginal and Torres Strait Islander peoples as they are the essential agents of change.”

Although data from the final Closing the Gap report (2019) shows First Nations children were enrolling into early education and completing Year 12, other issues such as infant mortality, employment and life expectancy – considered a “national priority” – had not been significantly improved. 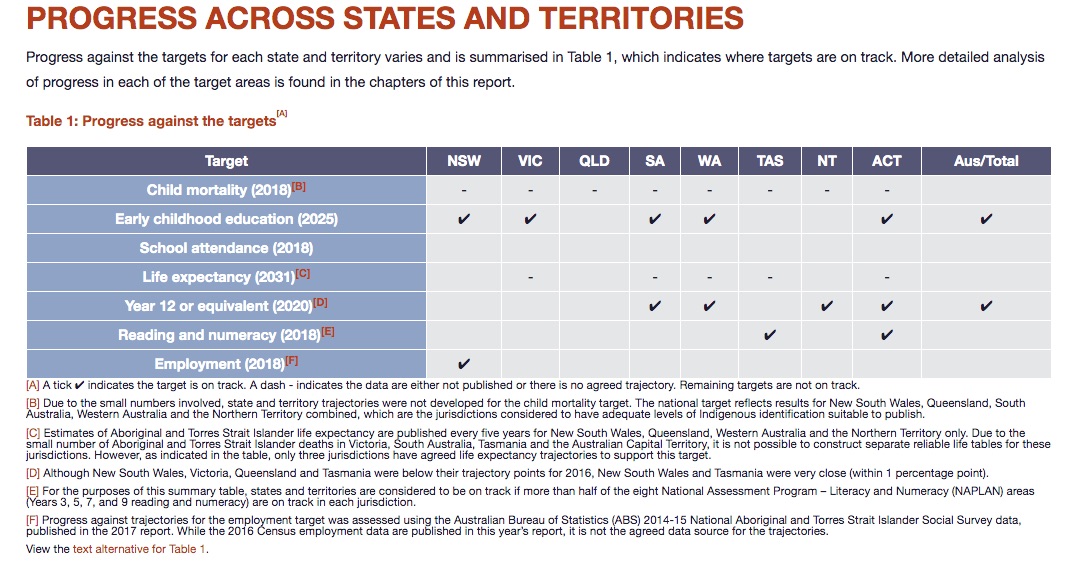 When Prime Minister Scott Morrison delivered the final report to Canberra in February he said the targets had been “set up to fail.”

“While it was guided by the best of intentions, the process has reflected something of what I believe is the hubris of this place – it did not truly seek to partner with Aboriginal and Torres Strait Islander peoples,” he said.

Miller said the refreshed national strategy aims to puts First Nations people at the forefront of the new 10-year policy through community consultation rather than a “one size” “fits all” model.

“We have to work on what the community needs, as what one community may need is going to be very different to another,” she said.

“We’re talking to Aboriginal and Torres Strait Islander community control members, people and their members, about what exactly is it that you need to change and how do we do it, in your community?”

The Coalition of Peaks held an engagement in Port Augusta yesterday. Another is being held in Adelaide today.

A Have Your Say survey will also be open until November 8 for online commentary.

Questions in the survey include how effective mainstream services such as hospitals, courts, prisons and policing, universities, income support and Medicare are for Aboriginal and Torres Strait Islanders.

It also assesses the need for “community-controlled” businesses to roll-out the policy.

A report collating each state’s findings and recommendations will be generated at the beginning of December for COAG.