InDaily has found 10 advertisements posted in online classified networks in the past month by men offering free accommodation, or reduced rent, in exchange for sex acts.

Young people have also posted advertisements seeking help to cover their rent or a place to stay in exchange for nude photos or sex acts.

The advertisements follow media attention around the sex for accommodation markets in Sydney and Melbourne last year, which highlighted the extent of the cities’ housing crisis.

One year on and there are still online ads offering places to stay in return for sex around the country, including in Adelaide and the surrounding areas, in a development which some advocates have linked to financial stress, particularly in South Australia’s regional communities.

Under the Summary Offences Act 1953 and Criminal Law Consolidation Act, exchanging sexual services for money is legal in South Australia – but a number of the activities surrounding sex work are not.

These include soliciting, living on the earnings of sex work, publishing an advertisement “to employ or engage a prostitute”, keeping a brothel and more.

In June, South Australia’s Upper House voted in favour of a bill to decriminalise sex work.

Introduced by Greens MP Tammy Franks, the sex work decriminalisation bill has been sent to the House of Assembly for consideration and will be debated in State Parliament later this month.

The bill aims to decriminalise sex work by removing from the state’s laws all offences relating to engaging in, soliciting or living off the proceeds of sex work, as well as other provisions.

Under current legislation, however, the legality of exchanging sex for services seems to be uncertain, with SA Police telling InDaily they did not believe sex for rent arrangements were illegal – but refusing to elaborate.

President of the Law Society of South Australia Amy Nikolovski said it was murky as to whether or not exchanging sex for accommodation was illegal, and the society was not aware of the law ever having been tested in that respect.

“With regards to both prostitution laws and the issue of consent, these kinds of arrangements can exist in a grey area and very much depend on the specific circumstances of the arrangement,” Nikolovski said.

“However, it is unlikely that the person accepting the invitation to provide sexual gratification to a landlord would be charged with soliciting or keeping a brothel. 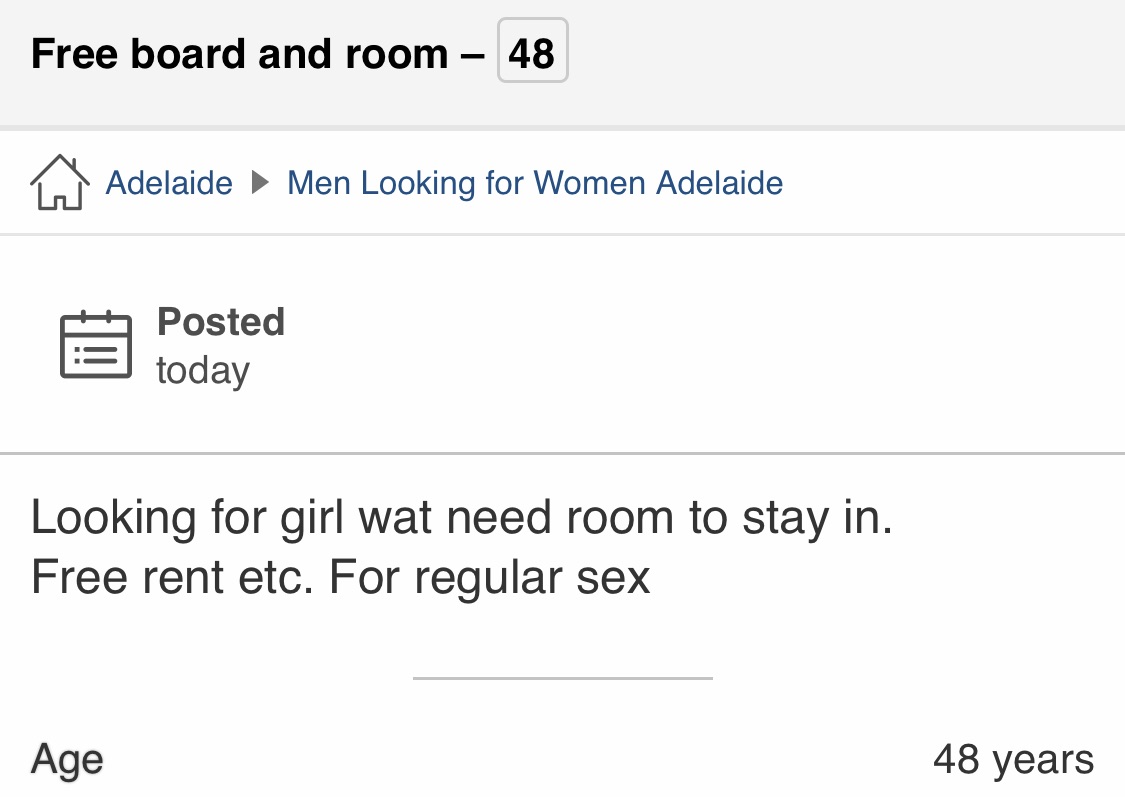 Nikolovski said it was more likely that sex for accommodation arrangements could result in an abuse of power, which could fall under sexual servitude or sexual assault laws.

“The society hopes that proposed laws to decriminalise sex work are passed soon, in which case there would be little need from a criminal perspective to consider whether parties in these arrangements are acting as prostitutes,” Nikolovski said.

“However, given that these types of arrangements could lead to the exploitation of vulnerable people, it would be worth looking into the efficacy of laws and policies to address these issues.”

The majority of sex for accommodation advertisements seen by InDaily appear to be posted by men.

One offered “a live in FWB [friends with benefits] situation” while another, which was allegedly posted by a 55-year-old male, requested “young, slim, sexy 18+ girls”.

A person describing themselves as a “fit 18-year-old guy” was looking for a room to rent for $50 per week or less in exchange for “company and adult fun to couples”.

While the advertisements were primarily for accommodation in Adelaide, vice-president of the Australian Unemployed Workers Union Hayden Patterson said the practise was especially prevalent in South Australia’s regional areas.

“Particularly around the cashless welfare card… when people’s money is quarantined or they have less money available to them to pay things like rent, they are finding other ways to get around it or to make up the shortfall,” Patterson said.

“Previously they would have cash to be able to pay their rent and [now] they are using that for other things that they need to live.

“People still need to have housing security so they are reaching for other ways to do it, whether they’re stealing groceries and selling them on the black market or in some cases they’re leading to sex work.”

Patterson is among a growing number of advocates pressuring the Federal Government for an increase to welfare benefits.

He said raising the rate of Newstart would alleviate some of the financial stress that was driving people to perform “opportunistic” or “survival sex”, which included sex for accommodation.

“With things like Newstart… people have started to come to the conclusion that they’re going through so many hoops and it’s so demoralising to be punished at every turn that they’ve gone: ‘you know what? It’s not actually worth what I’m getting on Newstart’,” Patterson said.

“And so, they’re choosing to walk away from income support and create a whole new income.”

No-one who used sex for accommodation would speak with InDaily on the record – even anonymously.

“Anonymity isn’t enough to protect them or they work in the industry and they’re not allowed to publicly have their opinion out,” Patterson said.

“It just puts their vulnerability at such a high level. So, they’re drawing attention to what they’re doing, which may impede their ability to do it or they may feel like there’s a further stigma that’s attached to it along with all the other things they are currently facing on income support.

“Even with the guarantee of anonymity, they’re still worried about the repercussions of speaking out about these issues.

“Whether it be the Sex Industry Network… or even advocates that are support workers, they could lose their job for a starter or lose their ability to have people trust in them and come to them. So being able to protect that level of trust and relationships they’ve built either through employment or with their clients is paramount to them.”

Patterson said while sex for accommodation was not uncommon it was hard to quantify because people were loath to talk about it.

“Unfortunately, because people are grasping at straws, they… [are] finding themselves in areas of work that they wouldn’t usually. They are out of their depth when something does go wrong and they don’t know where to go to for help.

“It puts a whole lot of things at risk, which also often feeds into depression and anxiety issues for people who are already living under the poverty line.”

An ad found on Locanto is offering a friends with benefits situation. Photo: InDaily

Sex Industry Network [SIN] general manager Kat Morrison said it was important people were aware that not-for-profits such as SIN were available for sex workers in need of support and guidance.

She said although she had worked with people who engaged in sex for accommodation, the practise did not necessarily fall into the same category as private sex work.

“In a criminalised framework, any kind of sex for accommodation service in exchange for anything, goods or service or cash could be viewed as criminal behaviour.

“So, currently anybody who may be exchanging sex for accommodation may be highly reluctant to call in support service or SA Police if they are experiencing any kind of abuse or victimisation.”

Morrison’s comments follow reports last year that South Australian Police had cracked down on sex workers, which was pushing the industry underground.

“In a decriminalised framework I would hope, and evidence shows, that sex workers are much more likely to contact support services,” Morrison said.

While SA Police said sex for accommodation requests were not illegal, a spokesperson recommended “that members of the public do not engage in this type of arrangement for their own safety”.

A spokesperson said “we will not provide advice regarding interpretation of legislation”.

Greens MP Tammy Franks said not only did sex work need to be decriminalised but more needed to be done to help people living in poverty.

“Clearly they’re desperate for shelter and support… it would be great if they didn’t have to resort to that in the first place,” Franks said.

“Surely, we should actually just be giving those people support and not treating them as the criminal?

“What we should be doing is offering them a helping hand, addressing homelessness and ensuring that people aren’t living in poverty. They are the real crimes.”