Treasurer Rob Lucas revealed that the Solid Waste Levy – a tax on waste sent to landfill – will increase across the metropolitan area from its current $100 a tonne to $110 a tonne on July 1, before leaping to $140 a tonne from January 1.

The regional levy rate is 50 per cent of the metropolitan rate.

The measure aims to raise an extra $14.8 million next financial year, climbing to $24.9 million by 2020/21, with most revenue used to fund environmental regulation and works, including coastal remediation and sand replenishment.

Ten million dollars would be set aside over four years to help councils and the waste industry try to reduce landfill.

The news left councils fuming at the size of the tax increase and its impact on budgets and rates. Councils and the State Government have been at odds over the Marshall administration’s ongoing push to introduce rate-capping.

With the council expecting to send 14,000 tonnes of householder waste to landfill next year, it estimated its levy cost to jump by $609,000 from January 1, with the new annual bill totalling $3.39 million.

Evans said Charles Sturt Council was about to adopt its budget, but the shock cost increase meant it would now be delayed.

“This is going to push out the adoption of our budget by a couple of weeks …it has to go back to council,” she said.

Evans was particularly angered by the State Government recently criticising councils over rates and accusing some, including Charles Sturt, of planning increases above CPI.

She said the government must have known at the time that massively increasing the cost of sending household waste to landfill would force councils to raise rates.

“I’m very unhappy about what I consider to be disingenuous political manoeuvering – very unhappy,” she said.

Charles Sturt Council was planning to fight back.

“We will be discussing a community awareness campaign, using social media and a direct mailout to the community,” she said.

The council would also consider inserting a liftout message to residents in rates notices.

The Local Government Association said the tax was introduced in 2003/04 at $5 per tonne, but would hit $140 tonne in six months.

“Feedback we’ve received from metro councils is that this increase to the levy translates to an average rates increase for 2019/20  of between 0.5 per cent and 1 per cent, ” a spokesman told InDaily.

“While councils have been consulting their communities on their 2019/20 budgets, the State Government has announced an unprecedented increase in their waste levy that will mean a direct hit to the pocket of every ratepayer,” he said.

“We’ll be asking councils what this unjust levy hike means for their rates, and making sure that every ratepayer is aware of every dollar that this disappointing State Government decision is costing them.

“The $2.5 million that the Government has made available to councils and the industry for waste and recycling projects over the next four years is a complete farce when you consider councils will be asked to contribute $42.5 million through the levy this coming year.

“The State Government should be working with us to make waste and recycling more affordable, instead of adding to the cost-of-living for all South Australians.”

Adelaide Lord Mayor Sandy Verschoor said while she welcomed Budget spending initiatives which would benefit the city, she was “very concerned” by the waste levy increase.

“These waste levies are a state government tax that we are forced to collect from ratepayers and have increased alarmingly in recent years,” she said.

Gawler Mayor Karen Redman tweeted after it was an “appalling treatment of local communities”, saying her council’s annual waste levy bill would be more than $700,000. 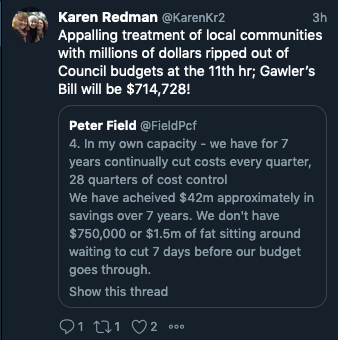 Opposition Leader Peter Malinauskas said the levy hike was “something which is a bolt out of the blue” and which councils would pass directly to ratepayers.

“It’s an unjustifiable tax grab and it comes on the top of huge increases to fees and charges which amounts to a $350 million dollar tax increase… on South Australian families,” he said.

SA Best MLC Frank Pangallo said it was an “act of revenge” for council rejection of State Government rate-capping reforms.

“There is simply no justification for such an extravagant and over the top hike in the waste levy,” he said.

“The fund isn’t depleted. It’s bursting with money which is being spent on other government programs.

“This unfair impost is deliberately intended to hit council operating costs hard because the Treasurer and (Local Government) Minister Knoll know that it will eventually have to be passed on to ratepayers who in turn will unfairly blame councils.”

Treasurer Rob Lucas said Labor had increased the fund from $5 per to $100 per tonne, and increasing it again would pay for works to remediate and protect West Beach and the metropolitan coast.

“But what it did do when it was increased at varying stages is it drove behaviour from councils to actually reduce the amount of waste going to landfill,” he told radio FIVEaa.

“Landfill creates methane gases – it’s much more potent in terms of climate change as compared to carbon dioxide … we have to reduce the amount of waste that’s going into landfill.

“And the environmentalists and the greenies will support the fact that the price impact on councils will drive them to change their behaviour, as it did at various stages over the last 16 years.

“Councils have to reduce the level of waste which is going to landfill; that’s a good environmental initiative and it’s certainly one that the Government strongly supports.”