The star is a “life-changing symbol” for Kerrie; a reminder of the session that forced the veteran to deal with “resistant issues” and achieve what she called a “breakthrough”.

Kerrie is one of eight South Australian Defence and emergency services personnel being treated under Australia’s only art therapy program for veterans with Post-Traumatic Stress Disorder (PTSD) at the Jamie Larcombe Centre in Adelaide.

But it was an event in 1998 that triggered her PTSD and propelled her into two decades of therapy.

“When I was over in Western Australia, a ship caught alight,” she told InDaily.

“A lot of people came back to the medical centre burnt and I was part of the first response team who had to go in and help with taking the bodies.

“That’s where the PTSD sort of started, and I guess I’m still processing it 20 years later.”

Kerrie first started receiving traditional Cognitive-Behavioural Therapy (CBT) in 1999 for what she now believes were the symptoms of PTSD triggered by this event.

PTSD is a cluster of reactions that can develop after witnessing a traumatic event, and can include flashbacks, agitation, social isolation and sometimes suicide.

Although Kerrie said the initial CBT treatment worked to treat the symptoms of her PTSD, last year she was given a brochure that promoted a new approach – art therapy.

The program is based at the Jamie Larcombe Centre, a veterans’ mental health precinct at Glenside, and run by South Australian organisation The Road Home.

Art therapy is a form of psychotherapy where a patient makes art while being counselled by a trained therapist. 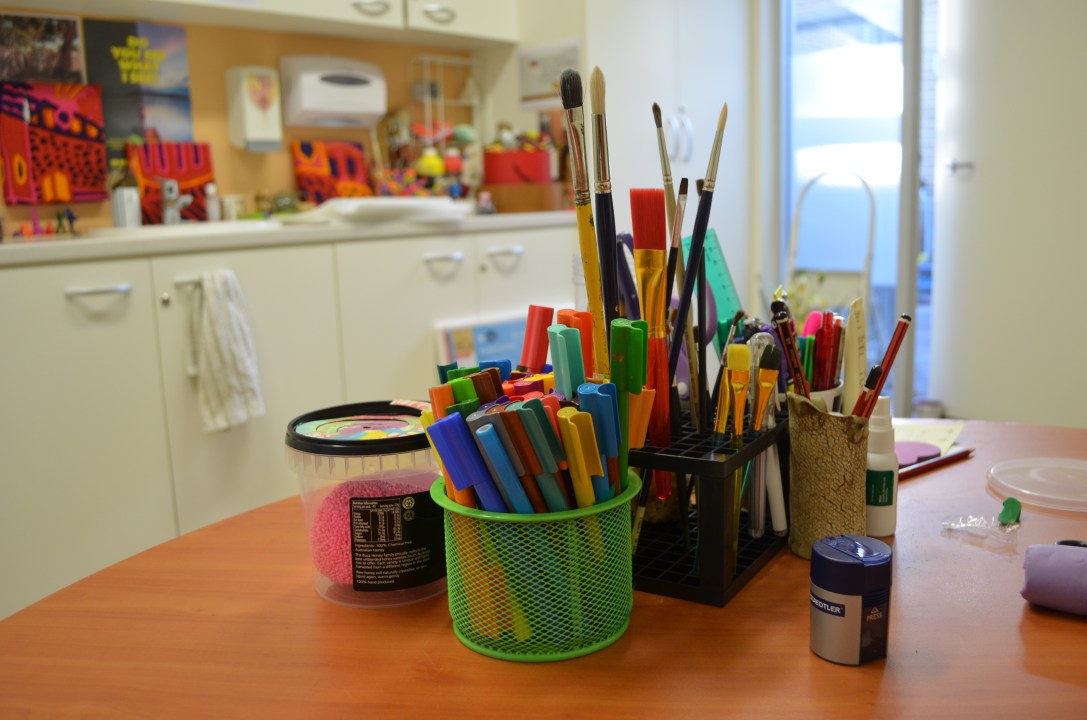 This method relies on the therapist to “decode” metaphors or non-verbal cues the patients present in their art and behaviour during sessions.

“Initially I wasn’t looking forward to coming, but now it’s a way of being able to address situations at a time rather than stewing on them,” said Kerrie.

“When you’re having a really bad day or a really dark day, it’s a way of expressing yourself through art, which may be drawing, painting, or making something out of playdough.

“While you’re actually talking you’re not thinking about what you’re doing but you’re releasing the angst.

“To be honest without art therapy I wouldn’t be here; I entered a really dark place and it really did help.”

While there are other national institutions offering art therapy to veterans – such as the Australian National Veterans Arts Museum and the Heidelberg Repatriation Hospital in Melbourne – The Road Home is the only organisation in Australia that offers art therapy for Australian Defence and emergency services personnel that targets PTSD. 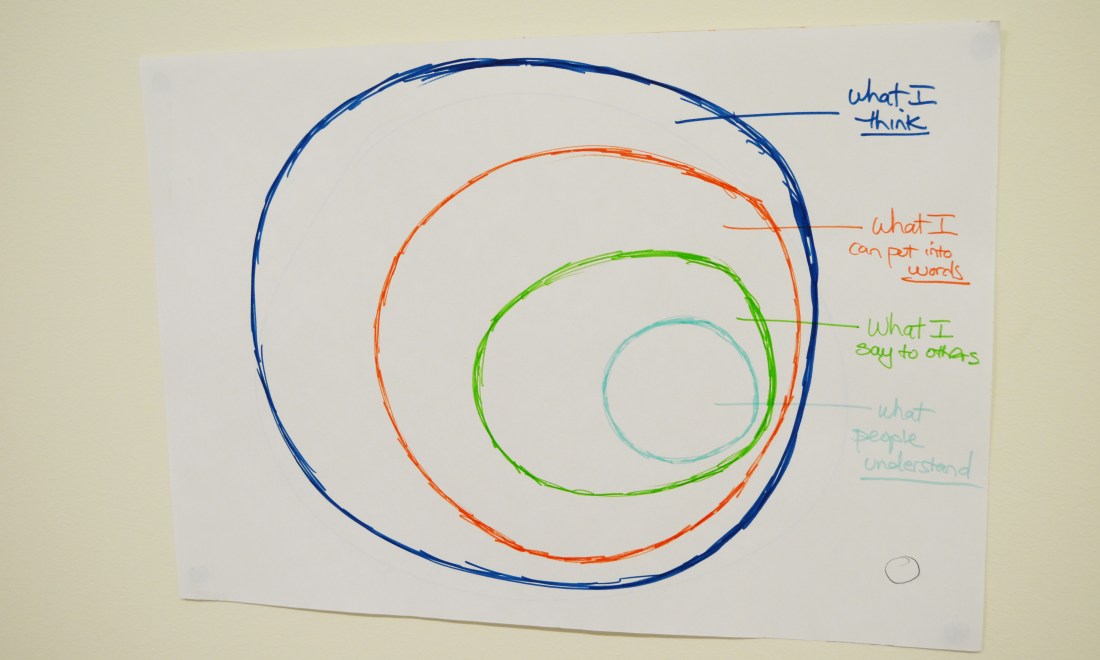 Karin Foxwell reproduced this graphic for her clients after a patient drew it for her. Photo: Angela Skujins

University of South Australia PhD candidate Holly Bowen-Salter wanted to study the treatment in an Australian context as an adjunct therapy, so the treatment could possibly be rolled out nationally in the future.

“We’re looking at what the existing research is, which there is not a tonne, so we’re sort of trying to build a comprehensive mythologically-sound, rigorous research foundation for art therapy, for trauma, in this country,” she said.

“We do qualitative interviews as part of the research, and we interview the patients after their sessions.

“From the raw interviews we’ve seen a lot of the veterans coming and having a certain expectation of what treatment they’re going to receive.

“Most of them have tried a tonne of different types of therapy – they’ve done psychology, they’ve done all the recommended programs – and they would previously go into therapy in a normally really clinical environment, but here they come in and it’s a really friendly environment.”

The 2010 ADF Mental Health Prevalence and Wellbeing Study revealed roughly 90 per cent of ADF members experienced at least one traumatic event in their life compared to the 73 per cent of their non-ADF counterparts.

The Federal Government’s Department of Defence state on their website they offer “a combination of medication and therapeutic interaction or treatment” from ADF Mental Health professionals and specialists, external providers and private hospitals for veterans living with PTSD. 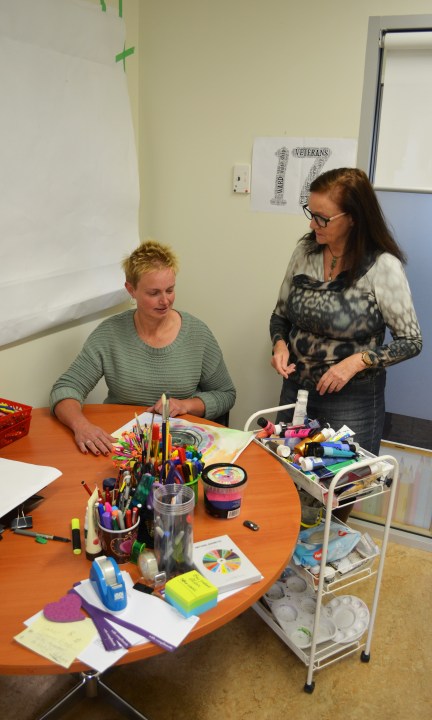 Since Kerrie’s first free visit in September, she has completed 20 sessions with The Road Home art therapist Karin Foxwell.

Foxwell believes art therapy is “just as good” if not “more-so” than traditional therapies currently being offered for veterans with PTSD.

“Verbal therapy or the talk therapies, which they call them, is just really quite traumatising,” she said.

“It’s often things that are repeated over and over again, and art therapy in a way still does that, but it’s in a softer format.

“Difficult emotions, difficult events, people can find answers to through the visual context.”

She said veterans can find these answers in art therapy through mediums like paint, sand trays, textas and pencils.

Foxwell said the therapy is researched and understood in America and the United Kingdom, but Australia lags behind.

“Therapy should be a multi-disciplinary space,” she said.

“We would all like to see art therapy added to the treatment modalities as there are lots of other things people can do to help them, but mostly its kept to talk therapy.

“I feel really privileged to use art therapy in this environment because it doesn’t happen here [in Australia].”