Shortly after the final preferences were distributed today, Leyonhjelm had to alter his bio once again, so it now simply states he’s a “former senator”.

The two One Nation upper house MPs will join a mixed bag of crossbenchers who’ll hold the balance of power in the state’s Legislative Council.

Roberts will join former federal Labor leader and NSW One Nation leader Mark Latham at Macquarie Street when parliament resumes in May.

The Liberal-National Coalition government won eight of the 21 upper house seats up for grabs at the March 23 election while Labor snared seven.

In March, Leyonhjelm declared he had been successful in his bid to move from federal to state politics. 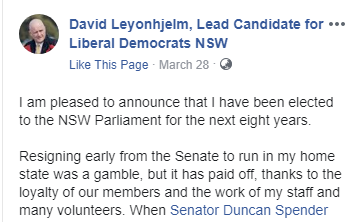