South Australia’s share of the spoils from the national defence boon has come under scrutiny in senate estimates this week, with ASC telling federal parliament it was instructed to explore options for shifting existing Collins Class maintenance jobs to Western Australia, and the Defence official in charge of the future subs project, Stephen Johnson, insisting there was “no set percentage” for Australian content, and a percentage figure had never been put on the table in discussions with the French designer Naval Group.

That’s despite SA-based frontbencher Pyne repeatedly insisting the level of “Australian content” in the $50 billion submarines project would exceed 60 per cent.

“This will be a local build. A local build is defined as being around 60 per cent plus,” he said last December.

He repeated his insistence today, telling ABC Radio Adelaide: “I absolutely guarantee it will be 60 per cent local build – it will be a lot more than that.”

But Labor has responded by pointing to a recent interview in a French industry publication with Jean-Michel Billig, the executive vice president of the Future Submarine program and a member of Naval Group’s executive board.

Contrary to what is said or written, we do not have precise figures on industrial or economic return to Australian companies

According to a translation by InDaily, Billig told Mer Et Marine (Sea and Marine) in a February 12 article that Naval Group was responsible for the “complete industrial fabric in Australia, with certain understandings to avoid all difficulties that may arise from carrying out a complex and costly program”.

“Contrary to what is said or written, we do not have precise figures on industrial or economic return to Australian companies, nor a limit on which supplier we choose,” Billig tells the publication.

“Our commitment is to maximise the Australian content throughout, or where it is possible – on the condition that we do not compromise the submarine’s performance or aspects relating to its dive safety.”

He said it was Naval Group’s responsibility to choose suppliers, “provided we explain our choice to the Australians: why we chose one over the other”.

“Diesel generators for example will be German, but we have asked the supplier to source as much as possible in Australia and the supplier has assured us that part of the production will be undertaken locally.”

He said there would “of course, be French suppliers but for now the contracts haven’t been signed”.

State Opposition Leader Peter Malinauskas leapt on the comments, saying: “Yesterday we heard from Australia’s General Manager of the submarine project warning that there was no local content guaranteed in the project contract – now we have discovered that the French lead negotiator is saying the same thing in France.”

“It’s hard to understand why Christopher Pyne and Steven Marshall wouldn’t have insisted that these guarantees form part of the contract,” he said.

The French article did, however, emphasise that the first program contract for the Attack-class design phase – which Billig expected to be signed in a few weeks – would create “thousands of direct and indirect jobs in Australia, primarily in and around Adelaide … a region that suffered badly in the Australian manufacturing crisis, particularly in the automotive industry”.

“Our subsidiary, Naval Group Australia, set up three years ago, currently employs around 100 people,” Billig said, according to a translation provided by the Opposition.

“Over the next eight to nine years, this figure will rise to between 1500 and 1600 – if one includes local suppliers, the total number of jobs created will be more than double that figure.” 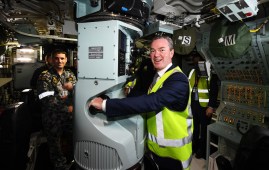 He said there would also be a jobs boon in France, with around 350 workers in Cherbourg already assigned to the program, which would fall to 200-250 “as production ramps up in Australia” – with the same number of jobs again in subcontracting work.