Just over a decade ago, the Rann Labor Government ended the practice of appointing the state’s best-performing and highest-paid barristers to the post-nominal title of QC (Queen’s Counsel), instead allowing the Supreme Court to independently appoint SCs (Senior Counsel).

The SA Bar Association has been lobbying the Marshall Government since mid-last year for a return to the practice, arguing that the monarchical title has better recognition and that top barristers appointed SC are disadvantaged when seeking work overseas.

InDaily can reveal that Cabinet approved a plan to adopt the Bar Association’s proposal this morning.

The decision sets Attorney-General Vickie Chapman on a collision course with the state’s top judges.

Chief Justice of the Supreme Court Chris Kourakis savaged the proposal on behalf of his fellow judges in a letter to Chapman in 2018, arguing it would undermine the independence of the judiciary and was potentially unconstitutional.

“The Judges of the Supreme Court cannot be co-opted by others into a scheme of their own making,” Kourakis’ letter reads.

The approval means South Australian barristers already appointed SC by the Supreme Court will be able to apply to the government if they want to switch their ‘S’ to a ‘Q’.

Lawyers will even be able to apply if they believe they will be appointed SC by the court in the future.

Current SCs can choose to retain their title if they wish.

Chapman told InDaily this morning the decision would give the state’s best barristers the greatest opportunities – and meant her focus could now turn to more pressing issues.

“As I’ve said from the beginning of this process, this has not been a priority of Government,” said Chapman in a statement.

“I had an opportunity to deal with this matter in a timely manner once I received the Bar Association’s submission and I have done so.

She said the change followed similar decisions in Victoria and Queensland and enjoyed the support of most of the legal profession in SA.

“(This) simply seeks to provide lawyers in SA with the option of adopting the title which they believe will provide them the greatest opportunities in the course of their practice,” said Chapman.

“The Government has made the decision to reinstate the option of having the title of QC in South Australia, following what Victoria and Queensland have done in this space and the overwhelming support for it in the South Australian legal community.”

In his letter, dated October 2, 2018, Kourakis warned Chapman she should not assume that judges will not actively obstruct the appointment of QCs because conferral of such a “favour” by the Government on particular lawyers undermined the Supreme Court’s independence, as well as the credibility of appointment.

“It should not be assumed that if the SA Bar’s proposal were adopted that the Judges would facilitate it,” the letter reads.

“The SA Bar’s proposal assumes that if the Executive (the Government) were to adopt the proposal, the Judges of the Court would continue to make appointments of Senior Counsel and not require an undertaking from Senior Counsel not to seek an appointment as Queen’s Counsel.

“The Judges of the Supreme Court cannot be co-opted by others into a scheme of their own making.”

The Government insists that the Supreme Court will continue to appoint eligible counsel to the title of SC.

Kourakis’ letter argues that “the contemporary constitutional independence of the Courts from the Executive raise the question of whether the Crown prerogative to appoint Queen’s Counsel has been abrogated.”

“The independence of the judiciary is a cornerstone of liberal democratic government.

“(The) conferral of a prerogative title on persons already appointed as Senior Counsel by this Court … signifies nothing but the conferral of Executive favour.

“… from a 21st-century perspective, the office of Queen’s of King’s Counsel is an anachronism.”

Kourakis was the only QC to voluntarily change his title to SC when the Rann Government changed the rules.

The text of the motion passed by the Bar Association endorsing the reestablishment of QCs says that there will be “no downside to the change, in that those wanting to remain as SCs can do so” and “the keeping of the current appointment system (for SCs) means that the independence and apolitical nature of that system will not be displaced”. 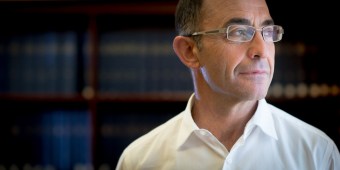 'We cannot be co-opted': Judges savage Bar's push for return of the QC

However, the motion explicitly proposes that SCs would to apply to the Attorney-General in order to become QCs.

Hoffmann told InDaily last month that: “Executive Government will have no role in the decision to appoint – contrary to what is asserted.”

“There will be no change to the process for appointment of Senior Counsel – that will be dealt with by the Supreme Court.

“The model proposed by the SA bar that is before the Government for consideration mirrors and adopts that in place in Victoria.

“It has operated in Victoria with a Labor Government in place without any difficulty.”