A survey conducted by National Shelter, the National Association of Tenant Organisations and consumer group Choice of more than 1500 Australian renters found that of the South Australian respondents, 51 per cent were living in houses that needed repairs.

The findings, published in Choice’s Disrupted: The Consumer Experience of Renting in Australia report, also found 68 per cent of Australian renters said they were concerned that notifying their landlord of property damages would result in a rent increase.

Shelter SA executive director Alice Clark said it was “worrying” that the report showed South Australia was “just as bad as the rest of the country” when it came to substandard rental properties.

She said it was unfortunate that there were no protections in South Australian law to allow people in the private rental market to take action against their landlords if property damage issues were not adequately addressed.

“I worry that because of increasing land value and house prices in South Australia, we are seeing some landlords who are not very willing to attend to repairs and are taking retaliatory action against their tenants if they do ask for them – either through a rent increase or an eviction,” she said.

“I heard recently from a private renter who was living in a property where the electrical wiring was ‘unearthed’, as she called it, and when she asked for that to be remedied it went on for several months.

“You’d have to think that once things become unsafe for people, never mind just broken, that we would have landlords quickly wanting to do those repairs.”

According to the Choice report, rental property damages are most likely to be located in the kitchen (57 per cent) and the bathroom (38 per cent).

The report found one-third of Australians who rent have experienced problems with mould in their bathroom, with a further 28 per cent reporting issues with pests (cockroaches, moths and ants) and 23 per cent reporting electrical issues. 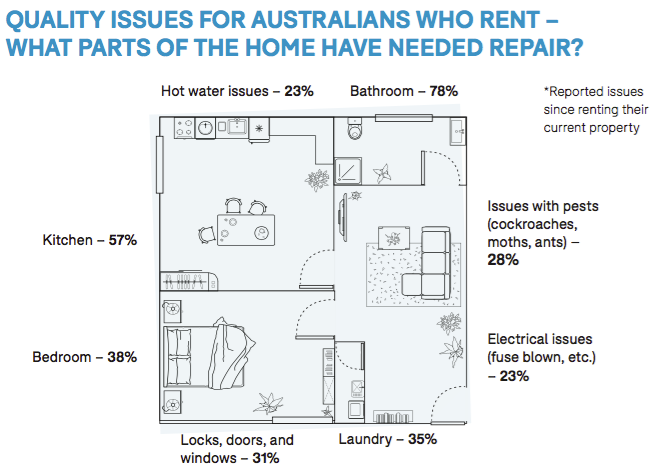 Clark said the report’s findings highlighted the need for a government-funded tenants’ union for South Australian renters, in particular, the 46 per cent who said they would find it difficult to afford a 10 per cent increase in rent.

“Every state and territory in Australia has a dedicated tenant union except South Australia – we are lagging behind and must do more to protect renters and their rights,” she said.

“What tenant unions do interstate is they have the community legal centres with lawyers that can give individuals legal advice and they can do to hearings with tenants and really just make sure they feel they’re as informed as they need to be if they feel they’ve received unfair treatment.

“What we’ve got here in South Australia is some of the ingredients of the tenant union, but we haven’t got a coordinated hub that is specifically looking at private renters.”

Human Services Minister Michelle Lensink did not respond to InDaily’s question asking whether she supported the call for a government-funded tenants’ union, but she said the Government had “hit the reset button” on what she described as a “broken” housing system.

“The State Government is currently seeking input from service providers and key community and industry stakeholders about how to best plan for South Australia’s future housing needs,” she said.

“After 16 years of mismanagement in this portfolio under Labor, the Liberal Government has hit the reset button on a broken system and will explore all options about how we can improve public housing in South Australia now and for future generations.”

Clark welcomed the task force, saying it would ensure that “all sectors of housing” could collaborate to improve housing outcomes in SA.

“To me, the governance settings are coming together really well,” she said.

“We need industry around the table – we can’t just welfare-ise housing, we need to be thinking about home ownership, private rental and social housing as part of the equation.”