Harris Real Estate director Phil Harris was appointed president of the REISA in late September – the same month his agency settled a court battle with rival agency Toop and Toop – but subsequently stepped down from the role.

In a statement this morning, REISA announced its former vice-president and prominent Adelaide auctioneer Brett Roenfeldt was last night promoted to president, with former director Andrew Friebe stepping into the role of vice president.

Harris had been elected in September to replace Alex Ouwens.

In a media release announcing Harris’ presidency on September 24, REISA CEO Greg Troughton said Harris’ appointment would ensure that “both REISA and the profession will be held in good stead for many years to come”.

But Roenfeldt told InDaily today Harris had voluntarily decided to step down from the role after a Harris Real Estate agent, Arabella Hooper, was found to have used confidential files in breach of her contract to lure clients away from rival agency Toop and Toop.

Harris Real Estate and Hooper agreed to pay Toop Real Estate $750,000 in a settlement executed in the District Court on September 21 – three days before REISA announced Harris as president.

The settlement said Hooper, a former Toop employee, improperly used 230 of Toop’s confidential files and several hundred pages of client contact details when she left the agency in 2015.

Hooper used the files to develop business with Harris, where she commenced employment a day after resigning from Toop.

Roenfeldt said the REISA board had been aware of the court case and that after lengthy discussions with Harris, the former president had decided to step down.

“The decision was made not to throw the industry into disrepute,” Roenfeldt said.

“We had a lengthy discussion with Phil about it and he voluntarily decided to step down from the board in light of the publicity surrounding the court case. 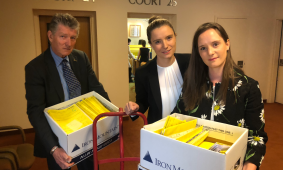 “From the board’s perspective it has all been resolved and we will just get on with what we’ve been doing.”

Harris served on the REISA board for three years both as director and as vice-president in 2017.

He declined to speak to InDaily about his resignation.

Roenfeldt confirmed that Harris would remain a member of REISA.