Out of the South Australian local government areas, the City of Salisbury tops the list of councils benefitting from a $75 per week raise, with increased spending of $33 million per year estimated for the area.

Nationally, around 12,000 jobs would be created if the Federal Government injected an initial $3.3 billion to support the raise – generating $1 billion in revenue from increased economic activity.

The report comes as South Australian welfare groups, politicians and local councils ramp up pressure on the State Government to lobby its federal counterpart to increase the Newstart and Youth Allowance payment.

Approximately eight per cent of working-age people in South Australia receive an unemployment or student payment. Those living on Newstart receive $273 per week (just under $40 a day), which is $160 per week below the poverty line. Newstart has not been raised in real terms since 1994. 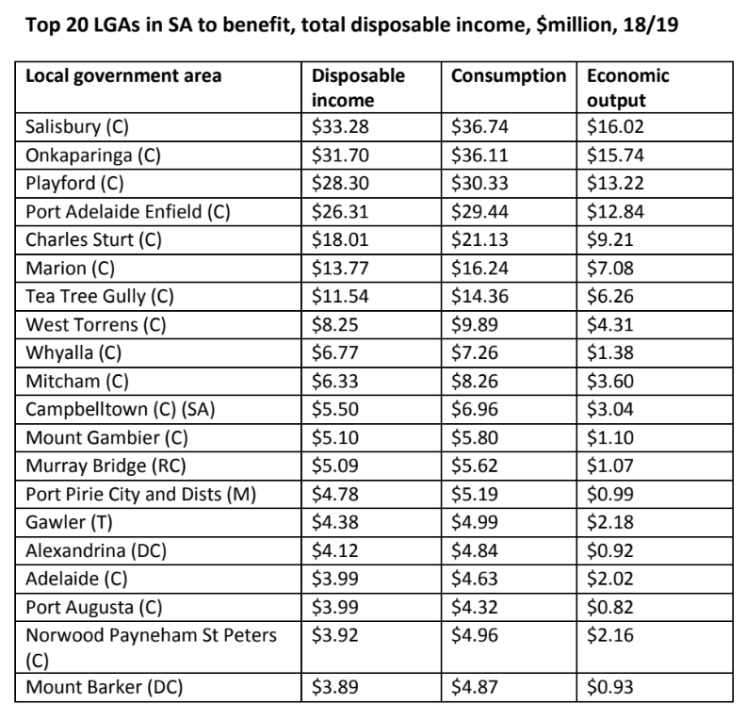 “Put simply, if Australia is to live up to its reputation for equity and fairness, Newstart needs to be raised to a level which actually ensures the employability of recipients,” Storer told reporters.

“Letting it fall further and further behind national living standards for so long has just not worked.

“It has condemned many of the jobless to a life of poverty where they cannot afford the clothes they need or the bus tickets they require if they are trying to get a job.”

South Australian Council of Social Service CEO Ross Womersley told InDaily the $75 per week figure was calculated based on “the absolute minimum income people would need to get close to the poverty line”.

“We have always argued that it’s not negotiable – we can’t go to a figure below the $75 per week,” he said.

“Ideally we would like a bigger increase but a $75 increase would allow people to live frugally but reasonably.”

Womersley said “huge economic benefits” would fall to South Australia if the Federal Government were to increase the income support rates.

“It obviously is a fantastic job creator by stimulating the local economy. It would result in more spending comparative to what is currently in practice and it would be an excellent job creator,” he said.

“Our hope for this would be to see this report have an impact on local councils and the State Government to join the call to rate the rate of Newstart by $75 per week.”

So far 13 South Australian councils have voted in support of raising the Newstart payment, a number which Anti-Poverty Network SA coordinator Pas Forgione said made SA the “leading” jurisdiction advocating for a raise in Australia.

“The South Australian local councils have really stuck their necks out on this issue far more than any part of the country, which really speaks to SA’s leadership on this,” he said.

“What I would love to see now is our State Government adding its voice to the ground race.

“If John Howard can add his voice why can’t Steven Marshall? What we want is for this to transcend the party divide.

“We think this is a safe issue for him (Marshall). We know two-thirds of Australians support a rise. The point now is for the people on the conservative side of politics to come out – Steven Marshall in particular as the Liberal leader.”

City of Salisbury mayor Gillian Aldridge, whose council area is expected to benefit the most in South Australia from an increase to the income support payments, described the current rate of Newstart as “horrendous”.

“I have a relative who is on Newstart and he was camping out next to a river because he couldn’t afford rent on such a low payment,” she said.

“You literally can’t live on it – it’s impossible.”

The City of Salisbury became one of the first councils in SA to add its voice to the campaign to raise Newstart when it voted on the matter last year.

“At Salisbury, we are working to encourage our economy to grow and our young people to be trained, especially now with all the new business starting up here,” Aldridge said.

“But, for that to happen it would make my year if people – and not just young people but older people too – had a liveable income to end their suffering.

“We absolutely need the State Government to add their voice to this call.”

In a statement to InDaily Human Services Minister Michelle Lensink said Newstart was the responsibility of the Federal Government.

“The Liberal Government supports ongoing consideration and monitoring of Newstart and other related welfare payments to ensure they adequately address the current level of poverty among Australian job-seekers,” she said.

Earlier this year Greens MLC Tammy Franks established a Parliamentary Select Committee into poverty, which heard from welfare groups and individuals last month on the state of poverty in SA.