Former Labor Senator Chris Schacht says merging the University of Adelaide with the University of South Australia will safeguard the financial future of both institutions and eventually give the combined institution a serious chance of ranking among the top 100 universities in the world.

Yesterday, the two universities announced historic talks over a prospective merger – an idea hotly contested in South Australia over the past two decades.

The state’s third major tertiary institution, Flinders University, argues it has strength and room to grow on its own.

Schacht says he was the first to publicly argue for a merger of all three universities during the national debate over the Dawkins Revolution tertiary education reform program in the late 1980s that, among other things, combined the South Australian Institute of Technology with the state’s colleges of advanced education to create UniSA.

He told InDaily this morning a new super university in South Australia would shore up the financial viability of the two universities and enable them to compete effectively with more cashed-up institutions in the eastern states.

But he conceded there would likely be an initial “dip” in international rankings for the new combined entity, compared with the University of Adelaide’s current ranking of 134.

“There may be an initial dip when the merger takes place,” said Schacht.

But he stressed that UniSA’s research capabilities were growing – faster than Adelaide’s – and that the combined academic heft of the two institutions would pay off in the long run.

“It’s going to be extremely hard for Adelaide University by itself … to get in the top 100,” he said.

“It just won’t be big enough … Adelaide University realises that financially (it is) under pressure.

“At a turnover of less than a billion dollars (Adelaide University) is not sustainable against the competition that’s coming.”

He also conceded that the creation of the new university would mean some job losses, but claimed there would be very few forced redundancies and the exercise would be a net job-creator in the longer term.

“There will be job changes … some of the present jobs won’t be needed,” he said.

“Some of the duplication of administration (will be eliminated) and some (job losses) will be in faculties. Overall there will be a bigger employment base at the new university.”

He added that a “snobbish” attitude associated with the University of Adelaide, against joining with UniSA might still exist among some long-time professors, but that it had “long disappeared amongst the young ones”.

But posts on the popular Overheard at the University of Adelaide Facebook page over the past 24 hours suggest otherwise. 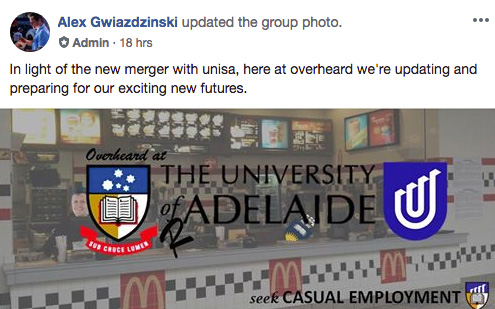 Image: Alex Trevisan / Facebook / Overheard at the University of Adelaide 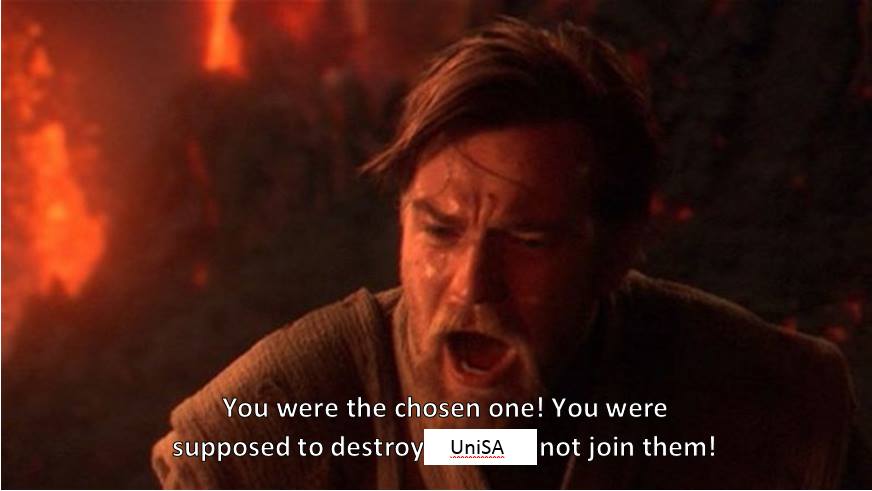 Image: James Lee / Facebook / Overheard at the University of Adelaide

Schacht came under intense public scrutiny in early 2013 when, as a member of the University of Adelaide’s governing council – but speaking as a private citizen – he publicly advocated the merger.

Then-Vice-Chancellor Warren Bebbington was fiercely opposed to combining with other universities.

“(The) University of Adelaide just committed to a 10-year plan in which we don’t expand our size any more – we doubled our size in the last 10 years, so we’re not growing any more, so that kind of rules out talk of a merger,” Bebbington told then-Nine News reporter Tom Richardson (now a senior reporter at InDaily) at the time.

Asked this morning why he believed the two universities – and the major political parties – have suddenly come on board, Schacht said “the inextricable logic” of the universities’ economic positions have made the decision inevitable.

And he warned Flinders University must join with Adelaide and UniSA or risk going under.

“Very rapidly, Flinders University is going to have to be in the discussion,” he said, adding that its future was under threat if it did not join the fold.

A spokesperson for Flinders told InDaily yesterday it was strong and growing in its own right.

“Flinders University continues to grow, with strong foundations and prospects for further growth, not only in Adelaide but the other regions in which the University operates, including the Northern Territory and regional South Australia and Victoria,” a statement from the university says.

“Flinders welcomes competition which it regards as an important driver of innovation and quality teaching to the benefit of students.”

The governing councils of University of Adelaide and UniSA will now engage in a “period of collaboration” and consultation to decide, by the end of the year, whether the merger is viable or desirable.

All current courses, student services and research will continue unchanged while the universities consult with staff, students, alumni, industry, government and other stakeholders on the proposal.

Merging the universities was an ambition of former Labor Premier Jay Weatherill in 2015, but universities and both sides of federal politics were opposed to the idea.

Then-federal Education Minister Christopher Pyne reportedly said at the time: “If the University of Adelaide was to merge with the University of South Australia we would lose overnight a top-100 university in the world because they’d fall down the rankings immediately. It would take about a decade to recover.”