And her call is being actively considered by SA Water which says it is “in the process of determining the best way we could help customers with medical needs”.

Pamela Kirkham’s daughter Airlie sustained an acquired brain injury when she lost control of the car she was driving in 1991.

The accident left Airlie with multiple disabilities that impacted her ability to move and communicate, however, as InDaily has reported previously, she has written an autobiography.

“She can’t walk, she can’t talk and she’s in a wheelchair,” Kirkham said.

“Ever since the accident she’s lived at home with husband and I and requires 24-hour care.”

Airlie receives a rebate for their high energy use, which helps the family finance the electricity required to operate Airlie’s medical equipment.

“I’m asking for a special rebate from the government for people who have proved that they use a lot more water to maintain their lifestyle and to keep them healthy.”

Kirkham said while her household is “water conscious”, the demands of meeting Airlie’s care means their water bill is triple the size SA Water estimates for a three-person household.

She said a special rebate would make a “significant difference” to not only her family, but to any person with a disability who has a high water bill.

“If you’re someone like my daughter who can’t do anything for herself and suffers from bladder infections, she has to have two or three showers a day, she uses a lot of water to wash her clothes – two loads a day – because she needs clean clothes all the time, you will be using more water than the average household.

“It’s more like a family of six than a family of three because we’ve got people coming here supplementing what we ourselves do.”

SA Council of Social Service CEO Ross Womersley said hearing the Kirkham’s story was not the first time he’d come across the issue.

He said the financial strain of high-water use for people with disabilities was “being overlooked not avoided”.

“It’s not an issue that a lot of people that aren’t carers are aware of or think about,” he said.

“There is not an equivalent for households who have to use large amounts of water.”

Womersley said a special water rebate could also apply to any household that has “unusual water demands”.

“We’re talking about households that have lots of children who need to wash the nappies and clothes and bed sheets,” he said.

“I knew a family and the son was obsessed with water – he would spend a lot of time wanting to play with the taps and the shower so that really impacted their bills.

“There are also households with older people who might be living in a situation where the partner has incontinence and they would be in that high-demand situation.”

Carers SA CEO David Militz said he was not aware of water usage being a particular concern among carers, however results from a recent Carer SA survey showed carers were “at the pointy end of needing assistance” more generally.

“That’s really quite scary when you think about those numbers.”

Militz said the carer payment provided by the Federal Government was not adequately assisting carers on low incomes.

“With that comes the ability to have an energy supplement which is only, if you’re a single person or a couple, at maximum $21 a week,” he said.

Brain Injury South Australia senior psychologist Ed Weaver said the organisation would support “anything that is going to ease the strain for families impacted by an acquired brain injury.”

After voicing her concerns at a SACOSS disability conference, Kirkham was contacted by SA Water.

“We had a big discussion about it,” Kirkham said. “They said I had a very valid argument and they were very moved by what I said.

“You’ve got to stand up and tell people or enquire if you want to see something happen, not just sit down and take it.”

In a statement to InDaily, an SA Water spokesperson said the agency was “concerned” to learn about the Kirkham’s situation.

“SA Water has a special allowance for customers undergoing kidney dialysis but we do not currently have any other allowances for customers with other chronic medical conditions or disabilities,” the spokesperson said.

“Through our discussions with Pamela, we’ve gained valuable insights into her and Airlie’s water requirements and we’re starting to understand the wider issues and considerations for households caring for a disabled family member.

“In response to the issues raised at the SACOSS conference, we’re now in the process of determining the best way we could help customers with medical needs. We’ve invited Pamela to participate in research and our team will be catching up with her this month to learn more about the challenges she is facing.” 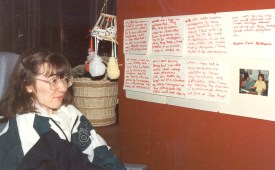 Amazing Airlie writes her way out of a life locked in

A survey published today by not-for-profit organisation Good Shepherd Microfinance shows 30 per cent of South Australians go without household essentials and can’t pay bills because the cost of living has become too expensive.

It found 28 per cent of South Australian respondents couldn’t pay for the medical treatment they needed and 11 per cent went without utilities including water, electricity, gas and phones due to financial hardship.