The carve-up recommended by the Australian Electoral Commission today will have political implications across the South Australian electorates, with the neighbouring marginal seat of Hindmarsh likely to become a safe proposition for Labor.

South Australia was always going to lose one of its 11 seats in the redistribution, due to low relative population growth.

However, today’s announcement has come as a surprise to the parties. It will see Port Adelaide scrapped and the northern suburbs seat of Wakefield – held by Labor’s Nick Champion – renamed Spence, in honour of Catherine Helen Spence, a pioneer of women’s suffrage.

The Labor-leaning heart of the current seat of Port Adelaide, held by the party’s national president Mark Butler, will shift to Hindmarsh.

The key question now is how Labor will deal with the reduction in representation.

Butler is a leading light of the party’s Left faction, while Champion is from the Right, along with outgoing member for Adelaide Kate Ellis.

Butler said today he was disappointed in the proposal to abolish the seat he has held since 2007.

“This seat is deeply entrenched in the local community, with a proud and long history,” he said in a statement.

“I will be looking at all my options as I continue to serve my community and as we await a final decision by the Commission.”

Champion said he expects to be the only Labor candidate for preselection in Spence.

When asked what Butler’s future was, Champion said the Labor party was famous for its maturity and “unity”, and challenges would be overcome.

The redistribution proposal is open to consultation, with individuals and parties able to lodge objections.

Labor’s state secretary Reggie Martin said the party would analyse the changes closely before deciding on its response.

“We note that this is a draft report, and has been made after a raft of earlier submissions, including a submission from the Australian Labor Party, which varies greatly from this proposal,” he said in a statement.

“We now have 28 days before our next submission is due, and we will take this time to closely analyse the proposed changes before we make our submission.”

Labor has held the seat since its creation since 1949.

While Labor will lose a seat, the ABC’s elections analyst Antony Green predicts the party will have increased margins in all of its  remaining South Australian seats, with the exception of Kingston, which will have its margin shaved from 17.1 per cent to 13.6.

On the Liberal side, Green’s analysis shows little change. However, Boothby – held by Liberal Nicolle Flint – will become the state’s most marginal seat, replacing Hindmarsh, with a trimmed margin of 2.8 per cent.

Hindmarsh, held by Labor’s Steve Georganas, has traditionally been a knife-edge swing seat. Under the new boundaries, Green’s analysis shows Labor’s margin will increase from a wafer-thin 0.6 per cent to a relatively comfortable 8.2.

Wakefield will become very safe for Labor – with the margin increasing from 11 per cent to 18 – and Adelaide, another seat with a swinging past, will see Labor’s margin plumped up from 4 per cent to 8.9.

The changes in Adelaide prompted Ellis to tweet: “Those new Adelaide boundaries almost enough to make a girl change her mind!” 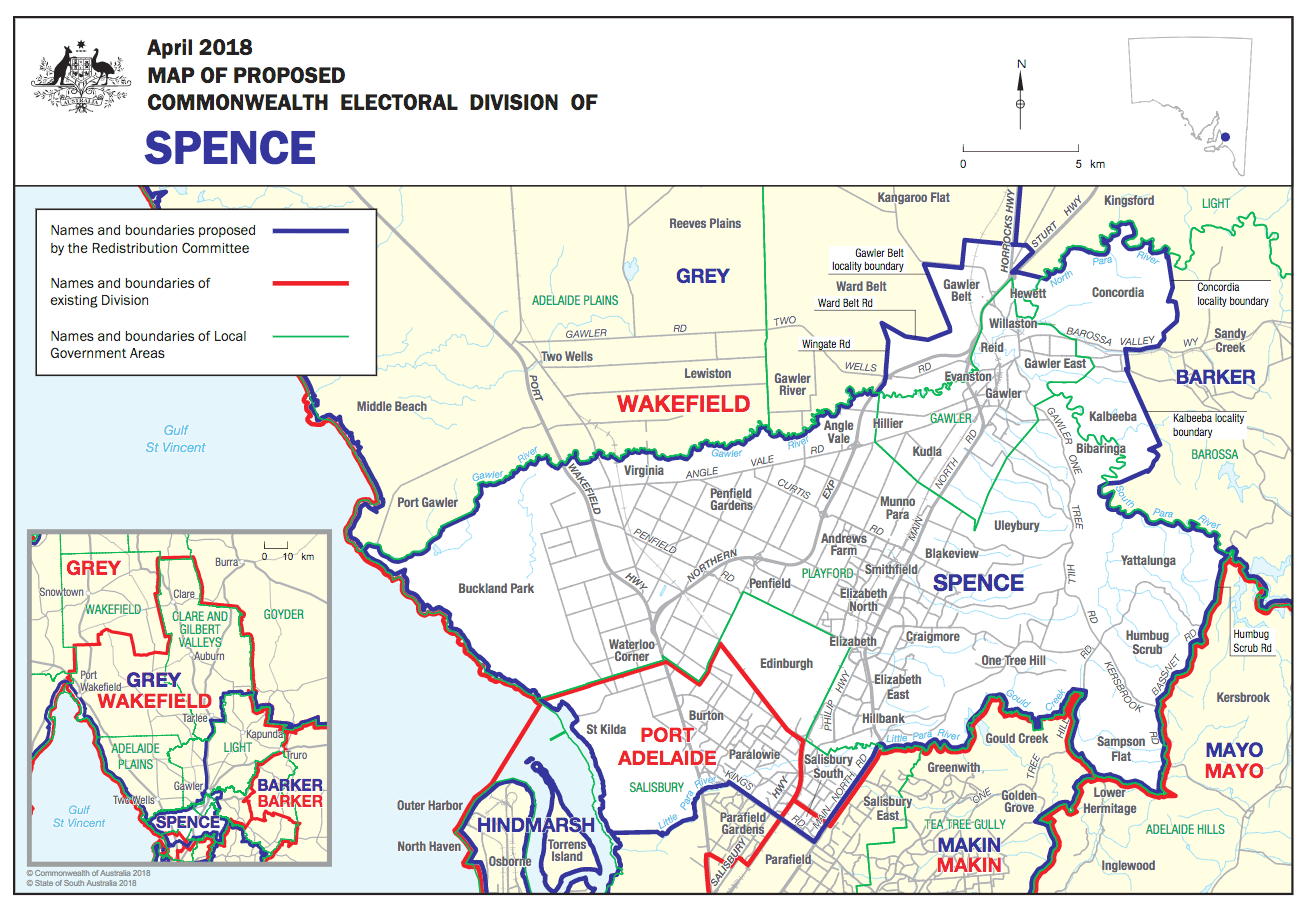 Despite widespread speculation that Liberal cabinet minister Christopher Pyne’s seat of Sturt would be abolished, that suburban electorate will see little change with Pyne’s margin virtually untouched, according to Green’s analysis.

Member for Mayo Rebekha Sharkie, who won the former Liberal seat for the Nick Xenophon Team, welcomed the redistribution, describing it as a win for “people power”.

“I’m pleased that the AEC has listened to the 195 members of our community who made submissions to the redistribution process to keep Mayo as an electorate,” she said.

“This was an unusually large number of submissions for a redistribution process and to have more than 90 per cent of the 211 total submissions argue in favour of keeping our electorate largely intact speaks volumes about the depth of feeling about our identity.”

She said that her seat would pick up voters from Boothby in the suburbs of Coromandel Valley, Craigburn Farm and Hawthorndene, and from Aldinga Beach, Port Willunga and Sellicks Beach, suburbs that are currently in Kingston.