Trams last trundled down O’Connell Street more than 60 years ago, but Labor wants to restore the transport option with a two-kilometre, $259 million “ProspectLink” extension, which it says should be completed by the end of 2020.

Labor is promising four new stops: at Adelaide Oval, the Women’s and Children’s Hospital, Archer Street and the Piccadilly Cinema.

In the bigger picture, the extension will provide a direct link from North Adelaide to Glenelg, via the Oval, the Festival Centre and the other city stops.

Like the Norwood extension announced by Labor yesterday, trams are promised every 10 minutes with the free city tram zone expanded to include North Adelaide.

Labor is also pushing the tram extension as a way to boost the recent purchase of the long-vacant Le Cornu site on O’Connell Street by the Adelaide City Council, which was supported with $10 million from the State Government.

Labor insists funding for the extension will be factored into its post-election budget, but InDaily understands a further extension along Prospect Road would depend on federal funding.

A new tram stop is nearing completion outside the Festival Plaza, as part of new works which include an extension of the city tram network down North Terrace to the old Royal Adelaide Hospital site.

While an extension of the tram network was included in the State Government’s Integrated Transport and Land Use Plan in 2013 – and included in Labor’s 2014 election campaigning – there has been little action since.

An image released by the State Government.

The Government funded a multi-million-dollar study into the expansion of the trams network which Transport Minister Stephen Mullighan promised to release last year.

That study hasn’t yet been released, but Mullighan indicated today the data gathered would be provided to the public.

He said the extensions had “strong cost-benefit ratios and they do justify the investment of taxpayers’ money”.

“We will certainly be releasing the work that has been done in these two corridors and these will show the improvements people can expect from having the tram service on Norwood Parade and O’Connell Street,” he told journalists.

Yesterday, Labor announced that trams would return to The Parade with a $279 million, five-stop extension terminating at Norwood Place, just south of George Street.

The Liberals have been equivocal, with leader Steven Marshall – the local MP for the Norwood-based seat of Dunstan – saying this morning that some people like trams, some don’t.

“Announcing extensions of the tram network before an election and dropping them after the election is a parlour game Labor plays with the electorate,” he said.

“In the four years since the Labor Government snuck back into power, they have delivered a one-kilometre extension down North Terrace that isn’t even finished and doesn’t include a right-hand turn onto North Terrace.”

Mullighan said today that the extensions announced this week would be built within two years.

For both extensions, there would be between six and nine months of consultation on final designs with local traders and residents. 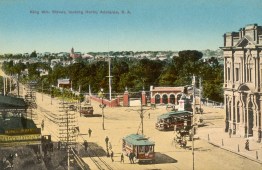 Richardson: How to save North Adelaide from itself

Premier Jay Weatherill said a Labor Government would extend the tram network “as our resources allow us to do so”.

He said the O’Connell Street extension made sense because of the high local population density and its proximity to Adelaide Oval.

“We want all the business along O’Connell Street to have the benefit of the tens of thousands of people who come here, bringing jobs and prosperity all along this corridor,” he said.

The trams, he said, would complement the council’s purchase of the Le Cornu site.

“We’d best describe this as the renaissance of O’Connell Street,” he said.