Yesterday, InDaily revealed that Adelaide’s most infamous plot of vacant land had been sold to the public for several million dollars more than independent valuations showed it was worth and that taxpayers would cover most of the difference.

Council sources had said that it was bought for about $35 million – several million dollars above the independent valuations the council had received for the site, which ranged from the low $20 millions to $28 million.

Haese released a statement yesterday saying the price of the sale was $34 million.

He confirmed at a press conference this morning that the highest independent valuation the council had received for the site was $28 million.

The State Government contributed $10 million, most of which will go towards the purchase.

As InDaily revealed yesterday, most of the taxpayer grant was used to bring the price well above the highest independent valuation received for the land.

But Haese insists the sale was a “very good deal” for taxpayers.

This morning’s media event was held on a cordoned-off portion of the 88 O’Connell Street site after Haese and area councillor Natasha Malani theatrically knocked down a pre-prepared section of its fence.

Haese told reporters that “the highest of the valuations was $28 million dollars” but argued that “property pundits’” estimates of the land’s value meant that the deal was a good one for ratepayers and taxpayers.

“If you read recent reports, various property pundits have suggested that the site could be worth anything between $30 million to $45 million dollars,” said Haese, also noting developer Con Makris’ claim that the land had been sold at a “bargain” price.

The Advertiser had last year cited property industry estimates that the North Adelaide property was worth $30 million to $45 million, and yesterday published Makris’ claim that the sale was a “bargain” for the public.

“Con Makris … has suggested that the site has been sold at a bargain price,” Haese told reporters this morning, adding that, ultimately, the price of a real estate sale comes down to how much a landowner is willing to sell it for.

“We believe that we’ve paid fair market value for this site, in fact, some property pundits have suggested that this site is worth up to $45 million.”

He said the O’Connell Street property was “an emblematic site – everyone in South Australia, everyone in metropolitan Adelaide, everybody in the City of Adelaide wants to see the city and the state prosper”.

“We can’t have large-scale … commercial sites in the middle of a gateway street like O’Connell Street sitting vacant for 29 years.”

A spokesperson for Premier Jay Weatherill said he had a pre-existing commitment and could not attend the press conference this morning.

Weatherill said in a statement: “The State Government is proud to support the City Council revitalise this prime site in North Adelaide.

“Private developers had three decades to do something, so the City Council, with the support of the State Government, stepped in to unlock the site and unleash the jobs and economic activity that will flow as a result of its development.”

Meanwhile, the CEO of the Adelaide City Council says he has not yet decided whether to launch an investigation into the source of the commercially sensitive details of the land deal that were leaked to InDaily yesterday.

Council boss Mark Goldstone told InDaily: “I haven’t decided and so I’ll leave my options open at this stage.”

In a statement, Goldstone said: “I have not launched an investigation into the source of yesterday’s Le Cornu site story.”

“However the information having been given to you by a council source is concerning as it had the potential to affect the settlement (of the sale) the conditions of which included confidentiality provisions until settlement was complete.

“Fortunately this did not happen … the sale was settled on schedule, without affect of your story.”

Central ward councillor Houssam Abiad, who is sick and did not attend last night’s dinner, told InDaily earlier this morning that the leaks constituted a very serious breach of a council decision and should be investigated.

“It’s very important role for the CEO to take into account any breaches of council motions,” he said.

“It’s also important that any council member and staff administrator adhere to a council decision.

“It’s a breach of a council decision (to keep the information confidential) and it’s a serious breach.”

North ward councillor Phil Martin, who attended the dinner and heard Goldstone’s remarks about a potential investigation, said: “Ratepayers’ money can be spent on something more practical and useful”.

The former radio journalist said “investigating the media is a tad offensive”.

“Media exists to find out what’s not in public view.

“When they do their job all power to them.”

Area councillor Anne Moran said it would be a “fruitless” exercise to investigate the leaks because “nobody’s going to own up” anyway.

Haese told today’s press conference that the land deal would be a boon for North Adelaide, and that after opening up the site to the public and holding a “block party” on it to celebrate within weeks, the council would begin engaging with the public on what sort of development should go there. 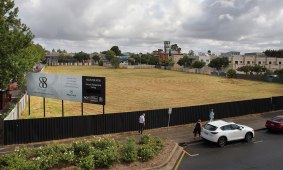 “This place has been a handbrake for 29 years – it’s held O’Connell Street back for too long.

“This welcomes a very exciting era for O’Connell Street.”

Makris had not responded to InDaily’s request for comment yesterday.

But speaking to The Advertiser yesterday afternoon he said the sale was a “bargain” for the public and that critics of his company’s failure to develop the site were jealous:

“The price they paid, $34 million, it was a bargain,” he is quoted as having said.

“Adelaide is very famous for its tall poppy syndrome.”