At a state election forum on the future of SA’s Mental Health sector today, newly announced candidate for Schubert, Paul Brown, said it was not “a realistic ambition” to ban pokies in hotel venues.

“You can’t remove pokies from every hotel and pub but you can have some control,” Brown said.

“I acknowledge the problems that pokies cause and it does lead to mental health issues…. it’s part of the fabric that causes all these issues.”

Brown was announced as the Xenophon party’s newest candidate this morning.

Xenophon described his candidate as having “extensive real life experience” in the state’s mental health sector, with a sister who suffers from early onset dementia.

The SA Best leader, who started his political career on a “no pokies” platform, told InDaily in December his party’s policy on poker machines would “worry the Australian Hotels Association”.

“SA Best will announce a poker machine policy very soon [and] I expect the AHA will be even more worried,” Xenophon said, referring to the Tasmanian Labor Opposition’s declaration that they would ban pokies from pubs and clubs in that state.

However, last year Xenophon was already hinting that his party’s policy might not go as far as banning pokies.

When asked on ABC radio in October if he would ban poker machines if he held the balance of power, Xenophon said “what I want is to reduce the damage caused by poker machines”.

Today, however, his political opponents seized on Brown’s comments, with Australian Conservatives leader Robert Brokenshire describing the SA Best candidate’s confirmation of the policy as a “huge admission.”

“We just heard a representative of former senator Nick Xenophon, a no-pokies man, agree that even they, in all truth, would not be able to remove all poker machines in pubs and clubs in South Australia,” he said.

Health Minister Peter Malinauskis told the forum today that tax revenue from poker machines had been on the decline for a number of years.

He said his party would be announcing “consistent” poker machine-related policies soon.

“Our policy position is in contrast to SA Best – I mean, today they’ve gone from no-pokies to pro-pokies,” Malinauskis said.

Dignity Party leader Kelly Vincent said poker machines were designed “from the bottom up” to target people with addiction problems.

“If it were up to me we would remove them, absolutely, but it’s not a realistic goal overnight” she said.

She said her party, alongside the Greens, support a move to remove EFTPOS machines in gambling rooms.

Greens MLC Tammy Franks said her party’s policy is to ban pokies from pubs and clubs within 5 years.

The Liberal Party’s Stephen Wade said it was not the party’s position to implement a ban on poker machines in pubs and clubs.

The forum follows the release of data from the Mental Health Coalition of SA, which shows South Australia will soon fall behind the national average on mental health NGO spending.

Data obtained from the Report on Government Services (ROGS), and funding estimates from the Mental Health Coalition of SA (MHCSA) show South Australia is about to dip below the national average percentage of mental health funding spent on NGOs for the first time in about 10 years.

State funding for mental health NGOs has been on the decline since 2012, after reaching its peak in 2007 with the launch of the SA Social Inclusion Board’s Stepping Up Action Plan for Mental Health. 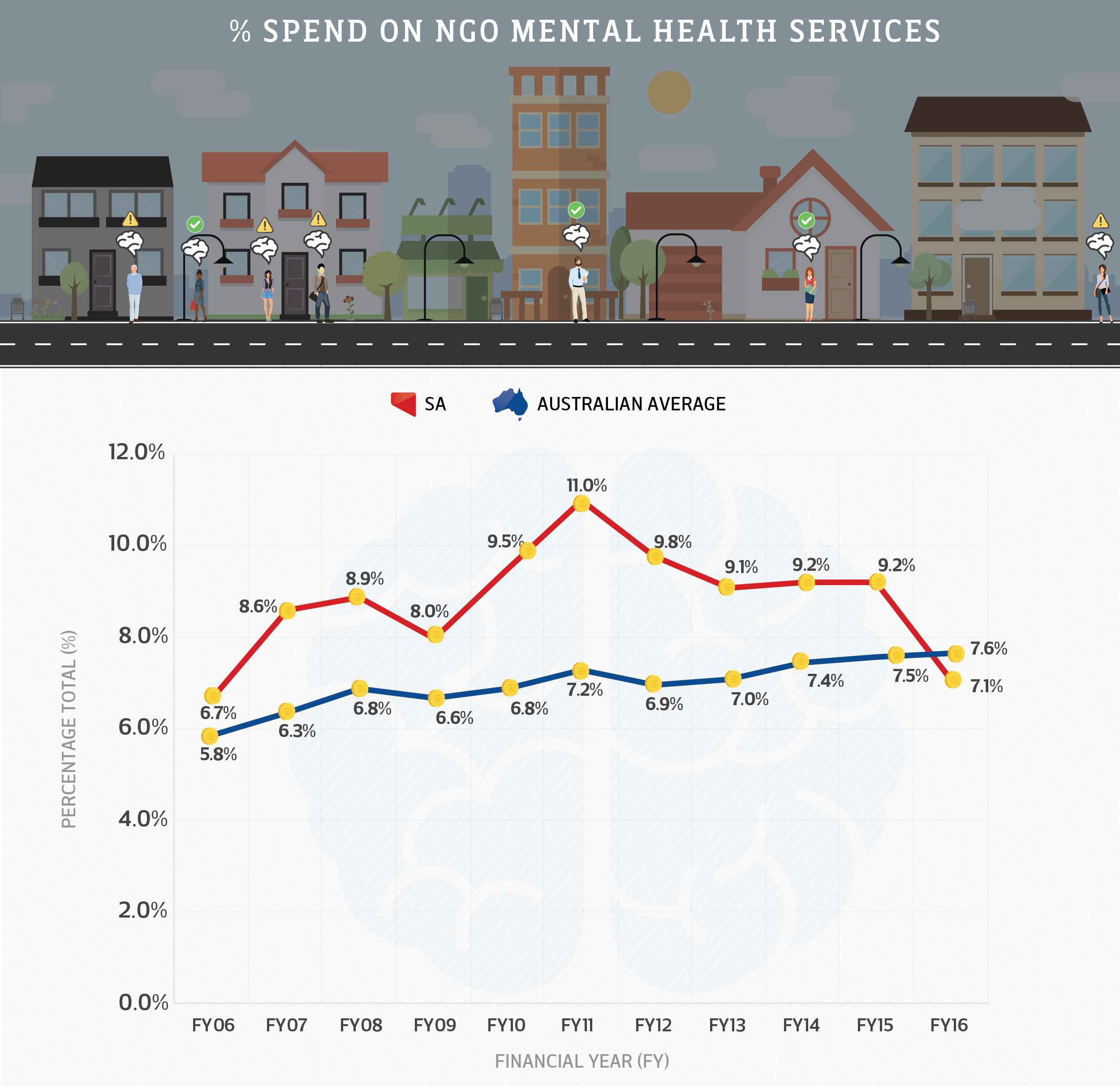 Malinauskis announced at today’s forum that a Labor Government would continue funding patients that are not picked up by the National Disability Insurance Scheme through a “Mental Health Service Guarantee”.

He also announced a $10.3 million commitment to “adequately resource” a BPD service in the state, and a further $17.1 million to resource intensive home based support services for people suffering mental illness.

‘We’ll be announcing more policies, certainly in the coming weeks,” he said.

Wade retorted that a Marshall-led government would implement a “Mental Health Services Plan” within 12 months of forming government.