The jury will be chaired by Michael Lynch from the Sydney Community Foundation and arts company Circa and features prominent South Australian arts figures including Art Gallery board chair Tracey Whiting, Art Gallery director Nick Mitzevich, deputy chair of the Australia Council for the Arts Lee-Ann Tjunypa Buckskin and deputy chair of the Economic Development Board David Knox.

Also today, the six shortlisted design teams toured the site proposed for a new contemporary art gallery, where they met with government officials.

Mitzevich described the shortlisted contestants as a “reflection of the international outreach of the competition”.

The AIA South Australian branch chapter manager Nicolette Di Lernia had previously told InDaily the structure of the competition – being run on behalf of the Government by London firm Malcolm Reading Consultants – prevented designs from being assessed exclusively on merit.

But Mitzevich today confirmed the institute had endorsed Stage 2 of the competition.

“Given the fact we had 525 architects from around the world – from both internationally and interstate – in 107 teams, it really shows that the competition has been well received by the industry,” he said.

The teams will now receive a further briefing and a $90,000 honorarium to create concept designs that will be revealed to the public in an exhibition in early April, and online, before the competition jury meets in May. 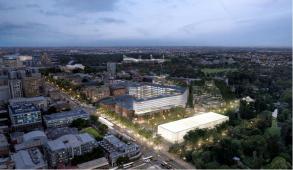 Mitzevich said he would pay close attention to how the entrants interconnect their proposed designs with the old RAH site’s neighbouring cityscape.

“It’s a big part of the design brief and the teams and well aware of that.

“It’s really an opportunity to lock in an inner city site, so close to the Botanic Gardens, that requires something special.”

The winning design announcement, originally intended for April this year, has been pushed to June.

Disclosure: Tracey Whiting is a director of Solstice Media, which publishes InDaily.