For the first time, South Australian researchers have recorded how human gut cells react to glucose, one of the key nutrients in our diet.

The study focuses on the secretion of a hormone called glucagon-like peptide 1 (or GLP-1) from the lining of the gut. When it is released after a meal, GLP-1 triggers insulin secretion from the pancreas and signals fullness, to limit further food intake.

As a result, this hormone has been the focus of significant new drug development for type 2 diabetes and obesity in the past decade.

“But while we knew that GLP-1 was important in diabetes and obesity treatment, we still knew little about how the release of this hormone was controlled in humans,” says research leader Professor Damien Keating, from Flinders University and the South Australian Health and Medical Research Institute (SAHMRI). 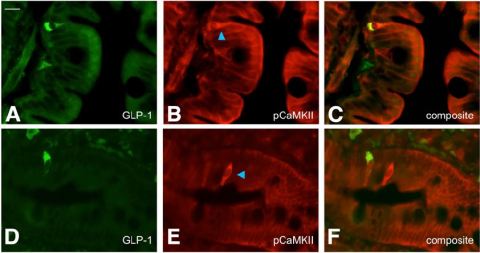 Microscopic images of the cells that secrete GLP-1-1 in the upper intestinal tract reacting to glucose.

“We have now recorded how the arrival of glucose in the upper intestine triggers the release of this important hormone, which has been a chief therapeutic target for a number of diabetes and new anti-obesity drugs,” Professor Keating says.

“By learning more about the gut’s mechanism to process glucose and produce this hormone, we can begin to develop potential new therapies which may be much more targeted and effective.”

With obesity and Type 2 (acquired) diabetes on the rise, these therapies will be important in increasing public health and wellbeing, and in reducing the future cost burden of these conditions to the community.

Drugs that mimic GLP-1, or increase its levels in blood, are now used successfully for the treatment of people with type 2 diabetes. In the past year, one such drug, a long-acting stable version of GLP-1, was approved in Australia as the first new anti-obesity treatment in more than 10 years.

Overweight and obesity are risk factors for Type 2 diabetes, heart disease, high blood pressure and other health problems including osteoarthritis, cancer and stroke.

University of Adelaide Associate Professor Richard Young, senior co-author of the paper, says these findings show that the secretion of GLP-1 in humans is triggered by the precise movement of glucose across the gut and into the blood.

“This has revealed new ways that we may be able to control GLP-1 release, and in turn, further improve the outlook for people with obesity and/or Type 2 diabetes,” says Associate Professor Young, who also is group leader of the Intestinal Nutrient Sensing Group at SAHMRI. 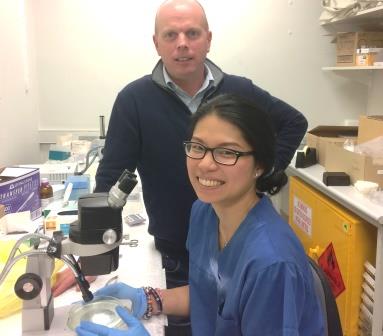 The 7th edition of the International Diabetes Federation’s Diabetes Atlas estimates that while one in 11 adults has diabetes (415 million worldwide), one in two (or 46.5%) of adults with diabetes is undiagnosed. Global expenditure on diabetes was estimated at $US673 billion in 2015.

Professor Keating is a National Health and Medical Research Council (NHMRC) Research Fellow and the Head of the Molecular and Cellular Physiology Laboratory at the Centre for Neuroscience at the Flinders University School of Medicine. He also is a member of the SAHMRI’s Nutrition and Metabolism Theme.

The research was supported by the NHMRC and Australian Research Council.

Diabetes is recognised as the world’s fastest growing chronic condition. The number of people with type 2 diabetes is growing in both developing and developed countries, with diabetes linked to 1.5 million deaths globally (2013). Higher blood glucose levels also caused an additional 2.2 million deaths, by increasing the risks of cardiovascular and other diseases (Diabetes Australia).