Stunning new details can today be revealed, while it also emerged the RSL’s state board – which has already been hit by a succession of resignations in recent months – will face a likely spill motion in June, just a week after the full extent of the organisation’s financial travails are revealed to creditors and members.

Attendees at a creditors meeting held at the Mercure Grosvenor on North Terrace yesterday afternoon were given scant detail, with administrators Rodgers Reidy set to reveal the full state of the books at a follow-up meeting on May 25.

That’s despite the RSL’s national office already having received a draft report of the forensic audit it commissioned earlier this year, as previously revealed by InDaily.

Media were kept at bay from yesterday’s briefing, an approach consistent with the PR bent employed since the administrator was called in a fortnight ago. The RSL’s state and national offices have consistently refused to respond to media inquiries, as has Rodgers Reidy director Brent Morgan.

The bunker mentality was summed up after the meeting yesterday, when one attendee – believed to be an RSL SA staff member – told the assembled reporters: “You’re all f*cking vultures – and that’s a personal opinion.”

But it’s understood the meeting was told trade liabilities could be in excess of $1 million, most of which is believed to be owed to two firms – accountants HLB Mann Judd and legal firm Jones Harley Toole (formerly part of national firm Hunt & Hunt).

Both firms are understood to be represented on a creditors committee, established yesterday.

Bizarrely though, senior partners of both firms were until recently prominent members of the embattled RSL SA board. HLB Mann Judd’s Corey McGowan and Jones Harley Toole’s Rick Harley both resigned as RSL directors in recent weeks.

Neither McGowan nor Harley – nor anyone from their respective firms – have returned InDaily’s calls, either today or in recent weeks.

RSL SA’s most recent financial statement – for 2015 – published on the Australian Charities and Not-For-Profits Commission website details a range of payments totalling hundreds of thousands of dollars to both firms, attributing them respectively to “professional fees and book-keeping” and “legal fees”.

“Transactions between related parties are on normal commercial terms and conditions no more favourable than those available to other parties, unless otherwise stated,” the report says.

It’s understood the creditors committee is also comprised of a representative for RSL staff, some of whom fear there is not enough money to continue paying their wages beyond coming weeks.

InDaily has independently verified that RSL has not paid staff superannuation contributions since December 22 last year.

RSL officials were tight-lipped both before and after yesterday’s meeting, after which state president Tim Hanna met separately with the administrators and Brighton sub-branch service member Rod Murray, who has led a recent charge for an extraordinary sub-branch conference, at which a motion would be put to remove the remaining elected members of the current board.

Murray told InDaily today that “as the administrator expects to hold the second creditors meeting on May 25, at which the true financial situation of the RSL will be disclosed, the extraordinary sub-branch conference has been postponed until Saturday June 3”.

“This will allow the sub-branches to make informed decisions after taking account of those results,” he said.

Summing up the feelings of many attendees, creditor Mick Mummery told media as he arrived: “I’d like to find out where the money’s gone.”

He said he and others represented Spirit of Gallipoli, “a small group that had some money held in trust” to fund a student exchange program in collaboration with the Turkish Association of SA.

“The last message we got from the organisation was, they didn’t know anything about us,” he said.

After the meeting, Mummery said he was little the wiser, but had been assured the RSL was “rich in assets and poor in funds”.

“We’ll have to make up our mind as to whether or not we wanted some of those assets to be sold off – which would be to the detriment of veterans,” he said.

“There’s certainly assets to cover the debt… the problem is whether or not those assets can be released.

“It’s going to be a difficult decision, whatever happens.”

He believed the RSL SA would “continue, but continue in a slightly different way”.

Asked if he had confidence in the current board, he replied: “I’m not prepared to answer that question at this time… I need to know more.”

On the site, it explains that “in 2012, the RSL South Australia Branch approached MindVision to move their Tributes of Honour system over to a modern platform and to incorporate additional features that would make it a virtual memorial”, adding Vafiadis should be “commended” for his “commitment to this endeavour”.

“We don’t have the full information – the administrators are still preparing a report,” Vafiadis said yesterday.

“There’s debt there, but the main problem I think is cash flow.

“I think all the creditors were understanding of the general situation… we’re trying to achieve a solution and save the RSL.”

Asked if this meant the RSL could be facing closure, he said: “That’s a possibility, certainly.”

But while creditors came away with scant detail, InDaily can reveal the RSL’s own dossier of decay, detailed in the briefing notes of a “President’s Forum” held in late February, and delivered by Hanna.

Essentially a mea culpa about the scale of the emerging cash flow crisis, the notes highlight an urgent need for change.

“We must change the way we do business,” Hanna states in the briefing notes.

The latest revelations come at the end of a hallowed week for veterans. Photo: Tony Lewis / InDaily

The document, which has been seen by InDaily, laments an ageing membership, difficult economic circumstances and poor systems and processes as culprits of the malaise, and outlines the skeleton of a revised strategic plan.

The plan would entail, among other things, “aggressively pursuing new revenue streams and maximising current initiatives, undertaking disciplined management of expenditure and future investments [and] establishing governance practices to ensure ongoing responsible operation at all levels”.

The document also details the fallout from a succession of thus far failed investments, including the purchase of the Avoca Hotel in Clarence Gardens.

The 2015 financial report says securities for Bank SA include “guarantee and indemnity…to the amount of $1,787,000 given by RSL SA”.

The briefing emphasises that the hotel is “returning a dividend to the RSL funded by the general public”.

As InDaily reported in March, both loans were due for repayment by December 16 last year if the property could not be sold.

The document states that zone regulations and car parking fees of $12,000 per space had “discouraged buyers”.

Rau’s office told InDaily today: “The Minister has encouraged the RSL to work with the City of Victor Harbor and the Department of Planning, Development and Infrastructure to consider the most appropriate zoning policy for the RSL land, and a possible rezone to enhance the potential for the site.” 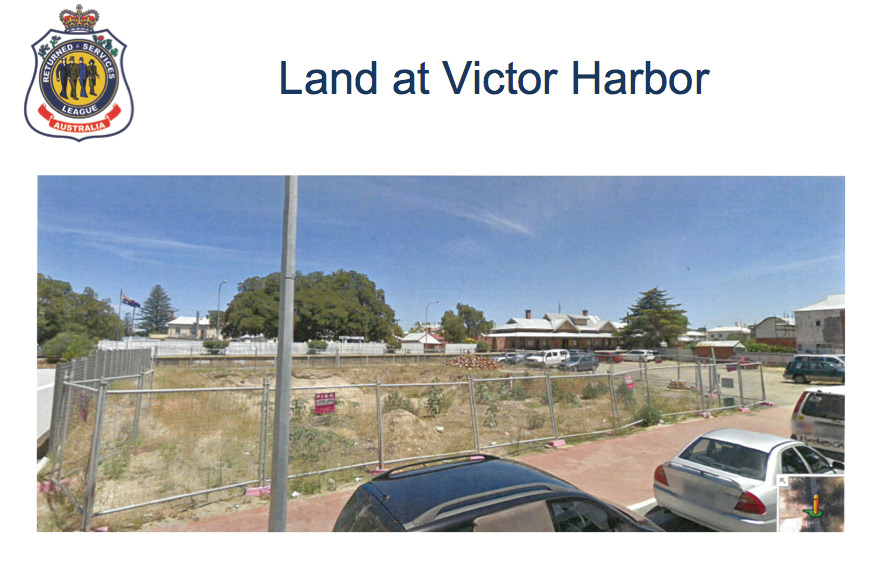 An excerpt from the briefing document.

The briefing also sought to put a rosy face on a series of payments to the trouble-plagued Alice Springs sub-branch, which still owes RSL SA $2 million – an amount unlikely to ever be recovered, according to insiders.

A succession of loans covered the theft of $600,000 by a former manager at the sub-branch and allowed it to upgrade and reopen after it shut its doors in 2011.

“It is fair to say that without the commitment from RSL SA to invest in and reopen the Alice Springs RSL sub-branch, it would have remained closed,” Hanna’s briefing enthuses.

“It is important to acknowledge that RSL SA recognised their moral obligation to support and preserve a significant part of Australia’s military history, and advocacy obligations… I applaud RSL SA for making this decision at the time.” 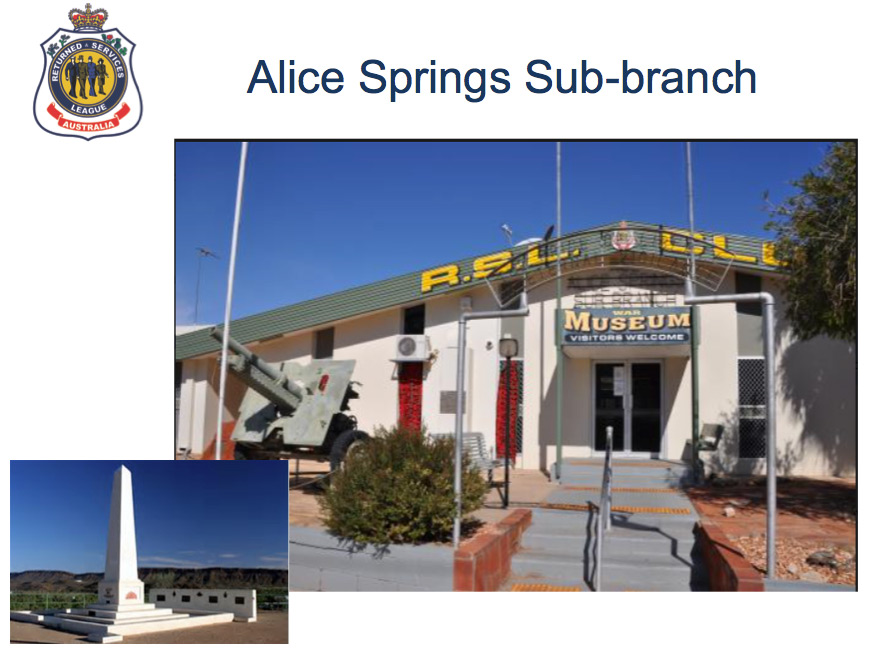 It detailed required actions including improving revenue, “especially appeals and advertising” while cutting costs and considering the sale of its Linden Park property that houses the Royal Australian Regiment HQ.

It also considers the “sale and/or ongoing management of RSL SA / Poppy Day Trust’s assets” including Victor Harbor and Alice Springs, as well as RSL Care – a separate entity – provided there are “no changes to residents’ arrangements, no changes to staffing levels or employee arrangements” and the property at Myrtle Bank is retained.