Flinders Biological Sciences PhD student Rebecca Dew and Associate Professor Michael Schwarz, together with Professor Sandra Rehan of the University of New Hampshire in the US, have found a rapid increase in the population size of the small carpenter bee (Ceratina australensis) from 18,000 years ago, when the climate began warming up after the last Ice Age.

Their findings, published in the latest Journal of Hymenoptera Research, show future global warming could be a good sign for at least some bees, which are major pollinators and are critical for many plants, ecosystems and agricultural crops.

“Our findings also match those from two previous studies on bees from North America and Fiji,” Ms Dew says.

“It is really interesting that you see very similar patterns in bees around the world. Different climate, different environment, but the bees have responded in the same way at around the same time.”

Global warming has other potential effects on environment and ecosystems.

“This bee, Braunsapis puangensis, is resistant to honeybee diseases and could well become an important ‘fall-back’ crop pollinator if honeybee populations continue to decline, which has become a major worry in many parts of the world, including Australia,” Associated Professor Schwarz says. 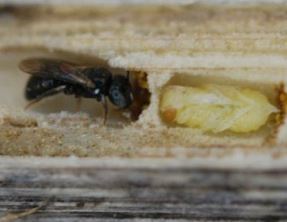 The findings, however, may not all be positive for bees globally, with other studies showing that some rare and ancient tropical bees require a cool climate to survive and, as a result, are already restricted to the highest mountain peaks of Fiji. For these species, climate warming could spell their eventual extinction.

“We now know that climate change impacts bees in major ways, but the challenge will be to predict how those impacts play out. They are likely to be both positive and negative, and we need to know how this mix will unfold,” Ms Dew says.

Ms Dew, who was previously awarded the prestigious J.H. Comstock award from the Entomological Society of America, is now investigating the populations of another species of native bee (Exoneurella tridentata) in arid areas of Australia.